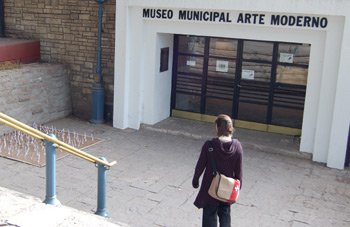 Standing at the beginning of my personal investigations on issues about curatorial practices, my starting interests includes the questioning of existing structure, within art and culture are produced and visualised. Regarding the period of the 20th century until nowadays, these structures, including the terms of public and publicity, et al., are involved in an ongoing process of change.
In this sense, I believe for instance, that the actual worldwide economic crisis should have impacts on the cultural and artistic practices, on their assigned imagined and grounded spaces, in terms of an anew shifting, which could imply a re-questioning, re-formulation and re-localisation in a positive way.
Secondly the focus on the viewer, the audience, which means for me the “outside” view, seems to me an essential part within the curatorial work and conceptualisation.
What is the meaning of public and of audience, and on what depends the making of meaning in each project?
What is their significance within a concept that the awareness about audience could enlarge the awareness about localisation and publicity? So the focus on the audience and public implies the questioning about themselves, the publicity, and about the protagonists (artists, curators, filmmakers, producers...), about their history and histories, about their environments and their communities.
For me a self-critical reflection on oneself, on the own positioning (maybe changing) within the public and society, as a curator, seems to be important, in order to integrate this questioning into the own work. Analysing, deconstructing issues of our societies, trying and testing out are main approaches for my, which makes curating exciting. The integration of self-critical reflection and of thinking about the public, enforces even more this approaches. In this context, I also may say, that testing out is some kind of a courageous acting.
This could be in form of a well-thought, smart provocative approach within curatorial and artistic practises or a revealing communication with the audience, for instance.

Biografia
Art historian, based in Innsbruck and Zürich, works at the Tyrolean Artist’s Association as the Director’s and curatorial Assistant, since 2006. MA in Art History at the University of Vienna in 2004, turning point from historical to contemporary art in 2001, thesis on a contemporary Indian artist women (governmental bursary for research in India). Studies MAS Curating at the ZHdK in Zurich, actual research in theory of the public, politics and the political. Participates in the curatorial project “leftover” at the White Space, Zurich. Work experience at the Secession, MAK, Vereinigung Bildender KünstlerInnen Österreichs in Vienna, Manifesta 2 in Luxembourg.