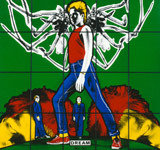 The Solomon R. Guggenheim Museum is pleased to present the Second Annual Robert Rosenblum Lecture on Tuesday, April 3, at 6:30 pm. In a choice emblematic of Rosenblum's relationships with artists, it will feature the internationally acclaimed artists Gilbert & George in conversation with novelist and cultural historian Michael Bracewell, who has authored several publications on Gilbert & George. Since first meeting at Saint Martins School of Art, London, in 1967, Gilbert & George have created a body of art that describes with unwavering lucidity the experience of being alive in the modern urban world. Violent, confrontational, and intensely atmospheric, the art of Gilbert & George reveals what the artists have described as "the moral dimension" of their subject matter: the desires, fears, hopes, volatility, and frailty of the human condition in all its messy and democratic momentum. For nearly five decades, Gilbert & George have created their works independently of any school or movement in modern and contemporary art, tirelessly refining the artistic capacities of what Rosenblum so succinctly defined as "the singularity of their duality."