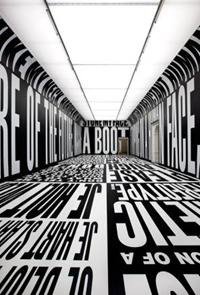 The Stedelijk Museum is opening its doors temporarily and brings you two new exhibitions of contemporary art: Taking Place and Monumentalism.
And every week: performances, films, guided tours, lectures, workshops and more

Another highlight of The Temporary Stedelijk is the exhibition Monumentalism— History and National Identity in Contemporary Art: Proposal for Municipal Art Acquisitions 2010, which will occupy one half of the ground floor galleries. The 2010 presentation of this highly anticipated annual exhibition of works by artists living and/or working in the Netherlands will address the concepts of history and national identity. The exceptionally large number of diverse submissions this year—359 in all— demonstrates the particular significance and relevance of the theme. Organized by the Stedelijk Museum Amsterdam, the exhibition is curated by Jelle Bouwhuis, head of Stedelijk Museum Bureau Amsterdam, and features the work of 19 artists selected by this year’s Municipal Art Acquisitions jury.

History seems to be an increasingly important factor in how we identify ourselves, our cultures and our norms and values. In the Netherlands alone, the recent establishment of a national history canon and the initiative to found a Museum of National History provide tangible evidence of the trend. In the 19th century, a similar upsurge in historical awareness led to the production of large history paintings and monuments commemorating national heroes and historic events. Contemporary art increasingly reflects on the past in myriad ways. However, unlike these earlier precedents, today‘s art is seldom made specifically for the glorification of a nation; rather, it deals with the broadened scope of issues related to social developments such as globalization and transnationalism, which challenge a clear comprehension of what constitutes ―the national.

This idea forms the scope of this year‘s municipal art acquisitions exhibition, which shows a wide range of possible responses and takes the subjects of national identity and history beyond nostalgia for a mythical past. Instead, the works yield an inherent fragmentation. Demonstrating a keen awareness that documentary images in photography or film are never straightforward representations of historical reality, the artists address those representations through all kinds of media—painting, drawing, sculpture, photography, video, sound and installation—while offering various insights and perspectives on cultural artifacts, language, politics, labor and capitalism through their individual explorations of questions surrounding national identity. Many of the exhibited works are being presented to the public for the first time.The 2010 Municipal Art Acquisitions jury has selected the following artists:

The members of the Municipal Art Acquisitions jury 2010 are: Jelle Bouwhuis (chairman of the jury and curator of the exhibition), Valentijn Byvanck (director of the Museum of National History), Binna Choi (director of Casco, Utrecht), Roy Villevoye (artist) and Krist Gruijthuijsen (co-director Kunstverein and freelance curator).

Monumentalism will be accompanied by a catalogue co-edited by Bouwhuis and Margriet Schavemaker, Head of Research and Collections, Stedelijk Museum, with contributions by the editors, Jennifer Allen (art critic), Hendrik Folkerts (art historian) and Joep Leerssen (historian). The book will also include information on the artists in the exhibition and a reprint of an article titled ―The Goodness of Nations‖ by anthropologist/political scientist Benedict Anderson. The bilingual (Dutch and English) volume is co-published by the Stedelijk Museum and NAi Publishers. Suggested retail price: € 19.50.

The exhibition is partially funded by the City of Amsterdam.

Taking Place reintroduces the Stedelijk Museum by addressing its history, the spatial and temporal conditions of the unfinished building and the ways in which artists use, occupy and animate museum spaces. The historical, functional and architectural conditions of the museum are both subject and material for this special presentation of works by local, national and international contemporary artists, who range from well-known and established figures to emerging artists.

Renovated gallery spaces on the ground and upper floors of the building ultimately designated for the presentation works from of the museum’s collection of 19th- to 21st-century painting, sculpture, photography, works on paper and applied industrial- and graphic design will for this occasion be used in an innovative and experimental way that takes advantage of their current state.

Another feature of The Temporary Stedelijk is an opportunity to directly experience the luminous, gracefully proportioned gallery spaces themselves, some of which will remain empty in strategic intervals between these room-size installations.

The Stedelijk Museum’s historic building is also home to two permanent works of art by Karel Appel: interior of the Appel Bar (1951) and the artist’s 1956 mural in the former museum restaurant. (Though the room is now a gallery, it will be used as the café space for The Temporary Stedelijk.) Following extensive restoration, these works, too, will be on display. On the wall opposite Appel’s 1956 painting, a stunning, specially commissioned work by American artist Lawrence Weiner will be featured. The work is a recent gift to the museum made by the Association of Friends of the Stedelijk Museum.

This recent acquisition joins 79 works by Weiner in the collection of the Stedelijk Museum (among them 58 artist’s books), including AN OBJECT MADE TO RESEMBLE ANOTHER BY THE ADDITION OF A SUFFICIENT QUANTITY OF EXTERNAL QUALITIES (1988) on a bronze plaque on the façade of the museum building.