Shockworkers of the Mobile Image. The Biennial draws together the work of more than 40 artists and filmmakers in a dense curatorial narrative. Confirming the idea that any biennial is a clone, the exhibition consists almost entirely of copies, reproductions, rips, and long-distance works. Forgotten classics and historical displays reveal a geneology for contemporary art in Soviet film and architecture, ever present in the space itself. 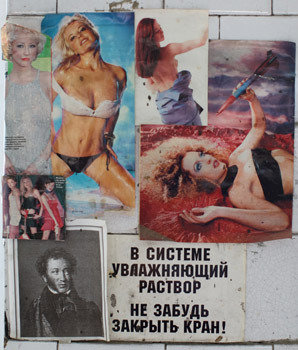 The National Center for Contemporary Art (NCCA) and the Sverdlovsk Region Governor's Office are pleased to announce the opening of the 1st Ural Industrial Biennial. The biennial will take place in the Ural Workers Printing Press (main project) and in four large industrial plants (special projects) in the city of Ekaterinburg. The Ural Industrial Biennial is initiated and developed by the director of the National Center for Contemporary Art, Ekaterinburg branch, Alisa Prudnikova.

Ekaterinburg, formerly Sverdlovsk, is the capital of the Soviet Union's industrial heartland, the Ural. When the USSR collapsed, the city's many heavy industries fell prey to economic malaise. But today, Ekaterinburg has become one of the hubs of Russia's resource economy, a site of accumulation following an era of shock privatization, a place where people dream with BRICs and awaken to the harsh realities of economic crisis. How should we understand all this new investor architecture, empty as of yet, all these new service industries, all that new imaginary "symbolic capital" produced by "creative professionals" and their underlings? What role does and can contemporary art play in such a place, when it comes to the half-operational spaces of Soviet industry? Can it be more than a shot in the dark, a fastmoving consumer commodity, a medium for gentrification, a plaything of the superrich? Can it be more than a reproduction?

The biennial's title is "Shockworkers of the Mobile Image," and its main venue is the Ural Worker Printing Press, a constructivist building in the center of Ekaterinburg. Built in 1929-1930, this space prompts a dialogue with the most contradictory period of Soviet history, when the party sent shock brigades to build heavy industries in the middle of nowhere. Their superproductive labor was supposedly voluntary, heroic, based on enthusiasm and affect, but overseen by a growing security apparatus. Foreign experts and internationalists participated, reproducing and implanting mobile images of Fordist modernity. Their engagement was genuine, but remained blind to the harsh reality of intensifying exploitation. In many ways, Russia's transition to global post-Fordist capitalism is no less drastic, and today's global artists, filmmakers, and architects are shockworkers, too, and internationalists, no doubt, capable of an affective solidarity much like that of the pre-fascist 1930s. They come to distant cities, working nights to build temporary factories on the sites abandoned by industry, factories that reproduce images, affects, and social relations, factories where free time takes on form and becomes a commodity. In Ekaterinburg, this temporary factory taps into a vast reservoir of amateur creativity, harkening back to an age when it seemed like all the shockwork was over... We want to ask: who is really the worker in this new factory? The artist? The curator? The audience? What happens when these workers leave? And what happens when they return?

The exhibition at the biennial's main venue is accompanied by a program of special projects, curated by Alisa Prudnikova. It inhabits the operational or defunct premises of some of Ekaterinburg's largest industrial plants. Artists from Ekaterinburg and elsewhere in Russia and from abroad will turn these production sites into a heterogeneous territory for experiments in the industrial environment. Factory spaces themselves become objects of artistic production that pursues a diversity of aims, be they critical, poetic, or social. The special projects program features contributions by artists from Russia, Great Britain, Spain, Germany, Mexico, the USA, France, Finland, and Sweden.

The opening days of the biennial are September 8th to September 12. To meet the occasion, the biennial is holding an international symposium dedicated to discussion of the industrial past and the post-industrial present from philosophical, sociological, and artistic points of view.

On the occasion of the opening, the biennial will publish a catalogue in two volumes, one of them dedicated to the main venue, the other to the special projects program. Contributors include Oleg Aronson, Keti Chukhrov, Boris Groys, Hu Fang, Ben Seymour and Hito Steyerl.

The Ural Industrial Biennial is a format initiated and developed by the director of the National Center for Contemporary Art in Ekaterinburg, Alisa Prudnikova.

The opening days of the biennial are September 8th to September 12.
The biennial also features a parallel program of events and thematic exhibitions at museums, galleries, and library in Ekaterinburg, Nizhny Tagil, and Nev’yansk.