The artist introduces a screening of the short film Ocularpation: Wall Street, along with a number of his other films 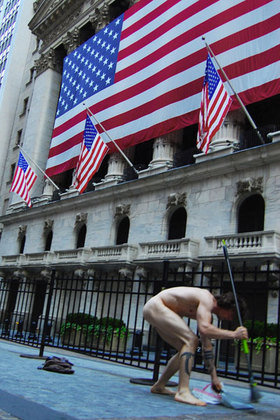 New York-based artist Zefrey Throwell uses film, painting, and performance to convey his vision of modern America and highlight "the failure of communication" in our age. Active in art circles since 2003, Throwell recently came to prominence through his performance/protest piece Ocularpation: Wall Street, which foreshadowed the ongoing Occupy Wall Street protests, and the subsequent global expansion of the "Occupy" movement. In this stirring call for more transparency on Wall Street, Throwell and 49 collaborators dressed up as employees of various Wall Street businesses, and then stripped off their costumes to reveal their naked bodies. The five-minute performance, staged in August 2011, now comes to MoMA as a short film directed by Throwell that "reveals" the events of that morning. Ocularpation: Wall Street will be screened along with a number of Throwell's other films, including a film of his original statement against "cubicle enslavement," Ocularpation: One - San Francisco. Part of Modern Mondays: contemporary filmmakers and moving image artists present their work directly to audiences. (Photo by Mike Kingsbaker)