Nothing was Delivered. Talks about a current project 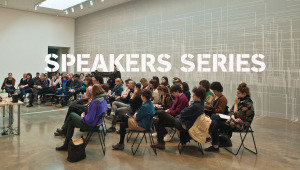 Fionn Meade talks about a current project, 'The Assistants', which looks at the transitive role of artworks as 'assisting' figures, custodians of memory and producers of deviance, including work by Dieter Roth, Cathy Wilkes, Uri Aran, Rosemarie Trockel, Laure Prouvost, and Alexander Kluge, among others. Fionn Meade is a curator and writer based in New York. He was most recently Curator at SculptureCenter, NY, where an exhibition he organized is currently on view with artists David Maljkovic and Lucy Skaer. His writing appears in such publications as 'Artforum', 'Mousse Magazine', 'Spike Quarterly', and 'Parkett', among others. He was the recipient of an Arts Writer Grant from Creative Capital and the Andy Warhol Foundation, and is currently a faculty member at the Center for Curatorial Studies at Bard College and in the MFA program for the Visual Arts at Columbia University.