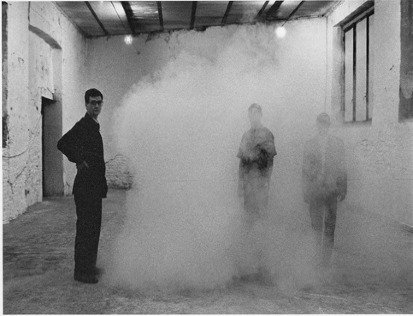 On the 12th issue, and against the archaeological tendencies that led to the research of ultimate sense in sad fossils, E IL TOPO decided, de motu propio, to summon personalities of the art world who passed away during the lapse of time in which the magazine vanished. Introduced by a series of performances, readings and secret activities, the new publication, a fragile and living organism itself, will be presented in Berlin at Supportico Lopez with a performance by Steve Piccolo & Gak Sato, Martin Gimenez and E Il Topo, directed by Gabriele Di Matteo and centered on the figure of the late American artist Sibyl Cohen. The launch of this new issue, a true séance, will brig to ephemeral existence those in the portraits that are no more, blurring with sharp images the concept of life.

Based on the involvement and inclusiveness [hence the “E” or "and" as the initial conjunction in the title], as well as on the power of a discontinuity in meaning inherent to the image, in only four years (1992-1996) E IL TOPO prophetically recorded, through the contribution of artists such as Art Club 2000, Massimo Bartolini, Vanessa Beecroft, Maurizio Cattelan, Mark Dion, Dominique Gonzales Foerster, among others, the spirit and attitude of a generation of artists which, at that time, was about to achieve definitive international recognition both critical and popular. E IL TOPO was a synergy catalyst, the feeling of a ferment of a shared practice, anticipating in this sense the experience of relational art; experiences which in recent times we have learned to recognize in very different and complex ways. This magazine was printed in editions of approximately 1000 and was the product of a series of collaborations that brought together diverse artists. These contributors proposed new projects conceived to be brought to life in the pages of the magazine and printed in black and white offset on recycled paper. The projects were mixed, overlapped, sometimes hidden, but always showing a completely innovative practice for the moment in which they were being developed.

But why talk about E IL TOPO today? Because E IL TOPO, after sixteen long years, has decided to leave its lethargy and to get going again to create new issues. Number 12 The 12th issue will be realized in 2012, sixteen years after the publication of the last issue of the magazine. This new number wants to show from the beginning a strong sense of continuity and one of innovation in relation with the last edition. Specifically, the new issue will be the outcome of an open call launched by the magazine which will focus on the retrieval of photographic material related to personalities of the art world who passed away along the last 16 years, thus in the lapse of time in which E IL TOPO disappeared without a trace. The collected material will be successively selected and displayed in the magazine. This project, which will face the Re-birth and the Death, wants to pay tribute to all those people who have dedicated their life to art and who disappeared abandoning the battlefield between 1996 and 2012