The Tanks: Art in Action

For the opening of the world's first museum galleries permanently dedicated to exhibiting live art, performance, installation and film works, a fifteen-week festival with over 40 established and emerging artists from across the world including Ei Arakawa, Nina Beier, Tania Bruguera, Yvonne Rainer and many more. It starts with Anne Teresa De Keersmaeker's "Fase: Four Movements to the Music of Steve Reich". The East Tank features a major new commission by Sung Hwan Kim and the Transformer Galleries showcase Suzanne Lacy's 'Crystal Quilt' alongside Lis Rhodes's important work 'Light Music'. 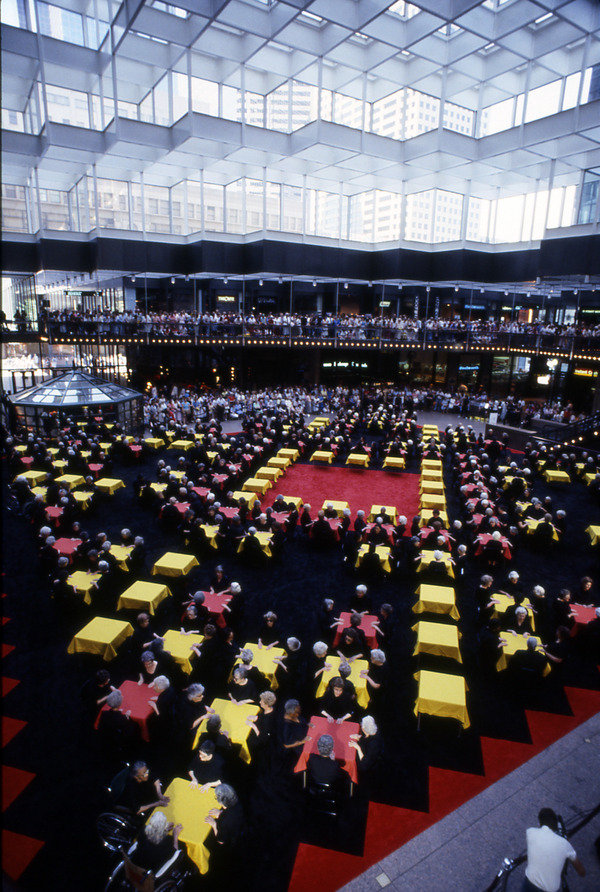 Tate Modern’s transformation continues with the opening of the Tanks on 18 July 2012 as the world’s first museum galleries permanently dedicated to exhibiting live art, performance, installation and film works. The launch is part of the London 2012 Festival, the culmination of the Cultural Olympiad.

The Tanks will be launched with a fifteen-week festival from 18 July to28 October 2012 celebrating performance and installation art and the historical works that have shaped it. The Tanks are raw, industrial spaces which provide an anchor and home for the live art and film programmes which have previously been presented in diverse spaces around Tate Modern.

The festival will allow audiences to explore new developments in art practice and learning, see bold new work being developed by artists, and engage more deeply with the programme. A major new commission and recent acquisitions will go on display for the first time and, for ten days during the festival, the programme will be created by and for young people. The opening programme is supported by The Tanks Supporters Group.

The East Tank will showcase a major new commission by Sung Hwan Kim, one of the key artists of his generation working in an interdisciplinary way with video and performance art. In his work, the artist takes on the role of director, editor, performer, composer, narrator and poet, collecting and collaging encounters, sounds, sculptures and images from his changing homes of Seoul, Amsterdam and New York. Drawing on a rich history of performance and film, inspired and taught by artists such as Joan Jonas, alongside cultural influences from Korea, his work is a unique form of story-telling. The commission for the East Tank is supported by Sotheby’s.

In the South Tank, a rolling series of projects will address the history of performance, film and interdisciplinary work alongside newly commissioned ‘focus’ projects. In addition to three major discursive events, which involve presentations, debates and performances, strands of the festival include interventions programmed by and for young people and two mass participation events for visitors of all ages involving sound, performance and film.

* Anne Teresa de Keersmaeker, one of the most important choreographers of the late 20th century, who will rework and perform a version of her seminal early creation, Fase 1982.
* Artist Tania Bruguera will take up residence in the South Tank for three weeks, running workshops and discussions on her latest project, a political party Immigrant Movement International.
* Eddie Peake, an emerging artist who in a previous work choreographed a football game for nude players, will create a new commission for Tate Modern that explores sexuality and voyeurism.
* Aldo Tambellini will re-envision his seminal 1960s electromedia environments, examining space, light and sound through immersive projections and live musical and spoken word performances.
* An ambitious series of live events and installations will re-examine groundbreaking figures in UK expanded cinema and film performance, including Brighton-based provocateur Jeff Keen, and Filmaktion, an influential group of filmmakers including Gill Eatherley, Malcolm Le Grice, Annabel Nicholson and William Raban.
* Visitors will be invited to create their own performance with Haegue Yang’s new installation of her mobile performative sculptures Dress Vehicles.
* The young people’s festival Undercurrent will be ten days of audio, digital media and performance rooted in London’s sub-cultures and includes events with Tate Collective, Rinse FM, Dubmorphology, ISYS Archive Youth Market/Orange dot, W Project and Boiler Room and artists such as Leo Asemota, Hetain Patel, Tracey Moberly, Ruairi Glynn and Jon Fawcett.
* Families will be invited to take part in a ‘live action’ event that will be created in response to the filmworks in the Tanks. Up to 5000 participants will have streams of 16mm film to manipulate, create a narrative or leave their mark on, which will then be projected onto the vast circular subterranean walls of the Tanks as a mass-authored piece.

The Transformer Galleries, the raw concrete galleries next to the Tanks, will showcase installations of recent major acquisitions of film and performance. Suzanne Lacy’s Crystal Quilt 1987, an exploration of the visibility of older women in the media that involved a mass performance broadcast on live television, is presented alongside Lis Rhodes’s important work Light Music 1975, which investigates the use of film, projection and sound and their relationship to the audience in an active film environment.

The Tanks were originally massive industrial chambers containing oil that fuelled the power station and have lain unused since it was decommissioned in 1981. They each measure over thirty metres across and seven metres high. The opening of the Tanks is Phase 1 of the Tate Modern Project. The new building will be completed by 2016 at the latest.

Nicholas Serota, Director, Tate said: ‘Tate is rooted in showing the collection and working with artists. The Tanks will give us the opportunity to respond to the changing practice of artists, many more of whom are now engaged in installation and performative forms of art than ten or fifteen years ago. It has also become apparent that our audiences seek different forms of participation and engagement. They want dialogue and discussion and the tanks will provide a forum for such exchange.’

Chris Dercon, Director, Tate Modern said: ‘Over the past ten years our experience in using the Turbine Hall for live events has demonstrated both the potential for Tate and an appetite on the part of the audience. By having these new spaces we can offer a different pace in our programming so that performance, sound, moving images, and participation - art in action - can carry as much weight as anything else we are doing. The Tanks are a new type of public space for art which is about social play. They provide the foundation for what we hope to be a revolutionary programme for the new Tate Modern.”

Ruth Mackenzie, Director Cultural Olympiad and London 2012 Festival said: ‘Tate’s new tank spaces, which will show the latest developments in the visual arts, are an exciting addition to Tate Modern and will provide another reason for visiting the world’s most popular modern art gallery. We are delighted that the launch of the Tanks is part of the London 2012 Festival programme.’

The full programme is on the web-site.