"Sound in Space" is an interactive space open to all ages that explores sound as a material and as a spatial, sensory, immersive experience, held in conjunction with the exhibition Soundings: A Contemporary Score. 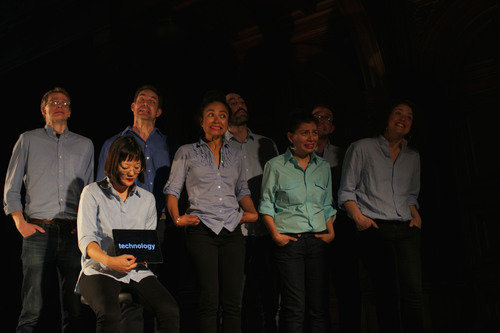 Held in conjunction with the exhibition Soundings: A Contemporary Score, MoMA Studio: Sound in Space is an interactive space open to all ages that explores sound as a material and as a spatial, sensory, immersive experience. Visitors are not just viewers but listeners who activate their experience through awareness of the interplay between environment and sound. The Studio offers drop-in activities and workshops, talks with collaborating artists, and a range of interactive artists’ projects that explore how the innovations of technology and the re-envisioning of our own physical ability to make sound change the way we communicate and find creative expression. Participating artists include Joe McKay, Angel Nevarez and Valerie Tevere, Carmen Papalia, Scott Snibbe, and Christine Sun Kim.

Light Wave
Designed by artist Joe McKay, Light Wave is a game that consists of 23 floor lamps and two pedestals arranged in an arch formation. Players use foam hammers to hit the pedestals, sending a signal through the lamps. The harder the signal is hit, the faster the signal travels from end to end. If players time it correctly, they can return the signal and prolong the rally. The speed increases each time the signal is hit until there is an eventual winner, and the game resets.

Tweetagraph
Tweetagraph is a telegraph wired and programmed to send Twitter messages instead of telegraphs. Designed by artist Joe McKay, this project seeks to playfully remind the participant that "digital" does not necessarily mean "new" technology. Tweetagraph uses an arduino for interpreting the signal from the telegraph, and processing to translate the code to text and communicate with messages through Twitter.

REWORK_(Philip Glass Remixed) [GLASS MACHINE]
The music of classical composer Philip Glass contains complex mathematical patterns, but their formation can be hard for nonmusicians to understand. Glass Machine distills the factors needed to re-create 1970s music by Glass and makes it accessible to people without formal musical training through a direct visual interface. In this app for iPad, the distance from the dots to the center of the circular graphic projection corresponds to the notes; longer lines correspond to higher notes. By moving and pinching the colored discs, one can create an infinitude of combinations of notes and polyrhythms. Users can also change the tempo, filter, and instrument. Glass Machine lets you create music inspired by Philip Glass’s early work by simply sliding two discs around side-by-side, almost like turntables. Select different instruments—from synthesizer to piano—and generate polyrhythmic counterpoints between the two melodies. The REWORK_ app features interactive audiovisual mixes by critically acclaimed musicians and remix artists including Beck, Tyondai Braxton, Amon Tobin, Cornelius, Dan Deacon, Johann Johannsson, Nosaj Thing, Memory Tapes, Silver Alert, My Great Ghost, and Peter Broderick.

An Exothermic Revolution
Rhythmic and tonal forms collide with one’s cardiovascular system in this new work by Angel Nevarez and Valerie Tevere. It’s aerobic, it’s music, it’s phenomenological—a manifestation of perception through the body in motion. An Exothermic Revolution invites participants to ride a stationary bicycle to control the speed of sound emanating from a limited-edition LP revolving on an attached turntable.

Media artist and filmmaker Scott Snibbe and his collaborator Lukas Girling discuss their work and its relationship to sound in space, with a particular focus on REWORK_(Philip Glass Remixed) [GLASS MACHINE], which is featured at MoMA Studio.

Special Exhibition Programs
Another Protest Song: Karaoke with a Message

Another Protest Song: Karaoke with a Message looks to the karaoke songbook as a potential source of political enunciation through song. As the 2008 presidential elections were approaching, artists Angel Nevarez and Valerie Tevere became interested in providing a mediated space in which users might feel comfortable getting on their soapboxes and professing their political interests and dislikes. In the era of televised competitive singing and innumerable karaoke bars, everyone is a singer, and the choice of a song says a lot about the performer, especially if that song includes political content. With "protest karaoke," while the song choice might communicate history in the present, it also speaks of a history attached (and newly considered) to a political situation rather than one consumed primarily as a popular cultural product. Originally commissioned as part of the Creative Time project Democracy in America: The National Campaign in 2008, Another Protest Song: Karaoke with a Message is a chance for you to sing songs of protest.

Artist Joe McKay discusses his work and its relationship to sound in space, with a particular focus on Light Wave and Tweetagraph, his interactive installations in MoMA Studio.

Special Exhibition Programs
Listening In: The Social Space of Sound

Soundings: A Contemporary Score features the work of 16 contemporary interdisciplinary artists who explore the relationships between sounds, objects, and environments—how we listen and how the spaces in which we listen impact our experiences. This discussion addresses the materiality of sound: the ways in which sound can shape our physical, collective, and social experiences; our framework for understanding our environments; and how the medium of sound is particularly positioned to challenge familiar ways of thinking. Participants include Philip Brophy, writer, composer, and film director; Christoph Cox, Professor of Philosophy, Hampshire College, and a faculty member at the Center for Curatorial Studies, Bard College; Branden Joseph, Frank Gallipoli Professor of Modern and Contemporary Art, Department of Art History and Archaeology, Columbia University; and Johanna Fateman, musician, writer, record producer, and member of the band Le Tigre. Moderated by Barbara London, Associate Curator, Department of Media and Performance Art, and organizer of the exhibition.

Karen Tongson, Associate Professor of English and Gender Studies and Seminar Director, University of Southern California, Dornsife, joins artists Valerie Tevere and Angel Nevarez in a conversation about their work and its relationship to sound in space, including a discussion about karaoke cultures and prevailing paradigms of originality and imitation in aesthetics and critical theory, a subject Tongson has explored in her latest book project, Empty Orchestra: Karaoke. Critical. Apparatus.

Christine Sun Kim, who uses performance and technology to explore her relationship with sound and spoken languages, leads a workshop that investigates the various states of sound, silence, gesture, and communication, as they exist and transform through physical interaction and technology. Ideas workshopped during the first portion of the afternoon will culminate in a public performance.

Ear cleaning is the practice of gaining awareness of the state of a soundscape by temporarily plugging the ears before listening. During these ear cleaning tours, artist Carmen Papalia leads a group of participants who are wearing earplugs to a number of noticeably different acoustic environments. Tour participants only remove their earplugs once they have reached a scheduled destination—at which point they will be lead through focused listening exercises.