'Conversations in Amman' is an exhibition, residencies, and talks program curated by Adriano Pedrosa to celebrate 25 years of support for the arts.. Works by Asli Cavusoglu, Asuncion Molinos Gordo, Daniela Ortiz, Jonathas de Andrade, Kiluanji Kia Henda and many more. 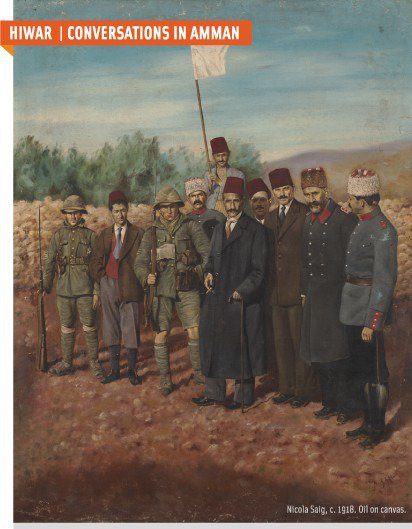 HIWAR | Conversations in Amman is an exhibition, residencies, and talks program organized by Darat al Funun and curated by Adriano Pedrosa to celebrate 25 years of support for the arts. HIWAR (meaning conversation in Arabic) has brought 14 artists from the Arab world, Africa, Asia, and Latin America to Amman for residencies in September and October, culminating in an exhibition opening on Saturday 9 November. HIWAR was born out of the necessity to promote exchanges between artists from the margins, not solely by juxtaposing their works in an exhibition or publication format, but also by giving them the possibility to learn from each other's practices and experiences.

"Conversations at the margins"
On Sunday 10 November, HIWAR curator Adriano Pedrosa will lead a conversation between curators working at the margins about the challenges they face while working through the margins, considering South-South connections, center-periphery flows, and the necessity to come up with new modes and models to look and think about art in these contexts. The interest in these conversations—which Pedrosa started in written form published in Mousse Magazine (n. 38, April–May 2013)—reflect a concern to establish connections and dialogues between artists and curators at the margins. Pedrosa writes: "I strongly believe that the South-South connections remain largely unexplored and in them lie the richest paths."

Darat al Funun is a home for the arts and artists from the Arab world. We trace our beginnings to 1988, and are now housed in six renovated historical buildings with a restored archaeological site in the garden. Darat al Funun organizes exhibitions, talks, film screenings and educational programs, hosts performances and concerts, offers a PhD fellowship and artist residencies, and publishes books and catalogues.