Punk Protest Performance: Pussy Riot in Perspective. What is the future of feminist performance art under times of censorship? With Rosi Braidotti, Judith Butler, Viktor Misiano and Pussy Riot. With a parallel programme of events and exhibitions in Oslo. 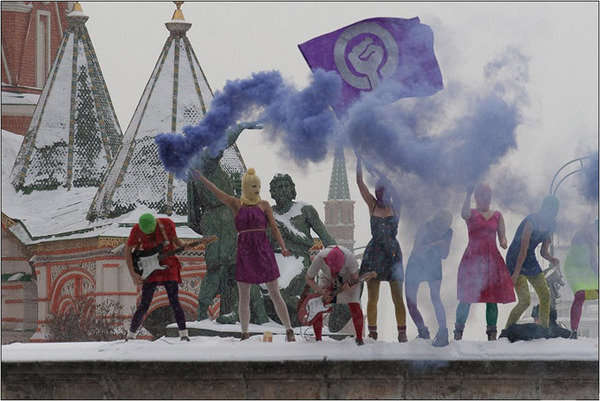 A number of issues were raised when members of Pussy Riot were arrested and imprisoned after their Punk Prayer performance in Moscow's Cathedral of Christ the Saviour (2012). When does public protest transgress the limited range of permissible behaviours in a society? What is the future of feminist performance art under times of censorship?

The First Supper Symposium have gathered these renowned speakers to provide different perspectives on Pussy Riot’s punk protest performances - from gender theory to Russian contemporary art practice - in dialogue with members of the feminist collective. Ekaterina Sharova will contextualise Pussy Riot’s performances in relation to the Russian contemporary art scene, while Viktor Misiano will situate their work within a history of art activism in the immediate post-Soviet era. Rosi Braidotti will reflect on the politics of women’s rock and punk bands and how performances have been used as feminist means of protest. Judith Butler will examine the gender and LGBT issues Pussy Riot invoke in a wider context of political demonstrations. Pussy Riot is represented by Nadezhda Tolokonnikova and Maria Alyokhina. Panel discussion moderated by Natalie Hope O'Donnell.

The symposium forms part of a series of events and exhibitions in Oslo, including a screening of Non-Consensual Act (in progress) and artist talk with Goshka Macuga at Kunstnernes Hus, an exhibition with the Feminist Pencil at Galleri 69/Grünerløkka Lufthavn and a screening of Die Moskauer Prozesse by Milo Rau at Café Mir/Grünerløkka Lufthavn.
The parallel programme has been curated by Ekaterina Sharova, in collaboration with the First Supper Symposium.

The First Supper Symposium is a collaborative feminist art project, founded by artists Gidsken Braadlie and Lisa Pacini in Oslo in 2012.

Galleri 69, Grünerløkka Lufthavn
Toftesgate 69
Exhibition with Feminist Pencil
From Russia and Europe artists working with stencils, stickers, linocuts, drawings, comics, posters, murals as well as other genres and techniques. In Oslo the curators present a smaller version of the large exhibition shown in 2013-2014. The showcase attempts to document the story of an ordinary woman in Russia, from either a capital or province.

Kunstnernes Hus
Wergelandsveien 17, Oslo
Screening of Goshka Macugas video.
In her film Non-Consensual Act (in progress),Goshka Macuga uses censored film clips received from the Afghan Film Archive in Kabul. In the process of re-editing the random collection of film footage of both Afghan and Western films, Macuga attempts to create a personal narrative, reflecting on the replacement of the term "rape" with "non-consensual act", as well as broader issues of gender discrimination.
The backdrop for the film is a lengthy and convoluted communication with the Afghan Film Archive, from whom Macuga decided to buy strips of film that had been discarded in the process of digitization. To her surprise, she was sent 19 rolls of censored film, showing scenes of a violent and sexually explicit nature. Macuga queried why the Afghan Film Archive had decided to make her the recipient, and ultimately the interpreter, of this material.
Macuga's work often focuses on institutional histories, researching and reinterpreting their social and political context. Through the orchestration of existing materials, collected items and archival documents, Macuga establishes an unconventional, associative narrative, examining the institution’s identity.