Jackson Pollock: Beneath the Surface

Symposium. Kirk Varnedoe was the Chief Curator of Painting and Sculpture at the Museum of Modern Art, New York. A bold and visionary curator, he was well regarded for his intellectual curiosity and imaginative thinking. 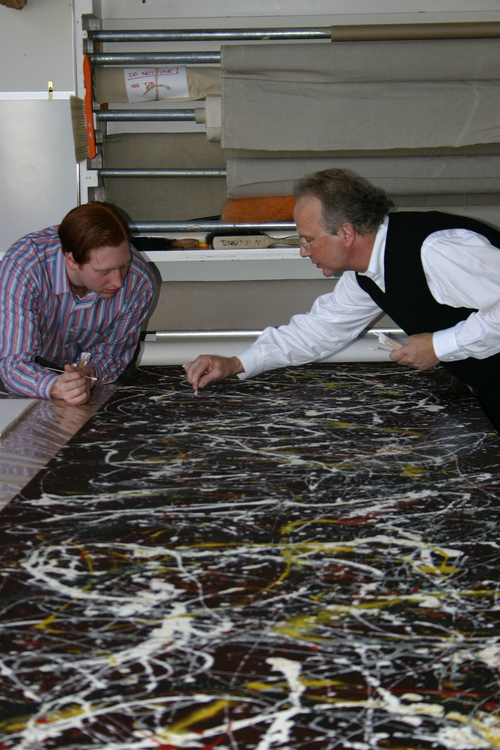 Williamstown, MA - The Williams College Museum of Art (WCMA) proudly presents the Plonsker Family Symposium: Jackson Pollock: Beneath the Surface, A Tribute to Kirk Varnedoe ’67. The symposium is presented in conjunction with the exhibition Jackson Pollock at Williams College: A Tribute to Kirk Varnedoe ’67 (April 14-October 1, 2006), which explores Pollock’s complex painting method, use of unconventional materials, and the “frieze" format as a compositional choice. The symposium speakers will provide further insight into the works in the exhibition, as well as reflect on new directions in Pollock scholarship.

The Plonsker Family Symposium will be held on Saturday, May 13, 2006 at Williams College. It will begin at 11:00 am with a special tour of the exhibition at WCMA by Jason Vrooman ’06, a Williams graduate student in Art History, who has been working with the Williamstown Art Conservation Center on the treatment of a major work by Pollock. It will continue after lunch, at 2:00 pm, with internationally recognized Pollock experts at the ’62 Center for Theatre and Dance.

* Please note that due to the large number of participants, Jason Vrooman will be available for questions in the gallery but will be speaking at the Symposium. * Additionally, the location of the Symposium is now at the ’62 Center for Theatre and Dance. Williams College President Morton Owen Schapiro will welcome the speakers. Adam Gopnik, editor-at-large for The New Yorker and former student of Kirk Varnedoe ’67, will set the tone for the afternoon by reflecting on Varnedoe’s contribution to the field.

The symposium will continue with presentations by four renowned Pollock specialists: Tom Branchick, Director, Williamstown Art Conservation Center who has treated a number of Pollock’s paintings and who will speak about the challenges and revelations of conserving his works; Pepe Karmel, Associate Professor in the Department of Fine Arts, New York University and co-curator of the Museum of Modern Art’s 1998 Pollock retrospective will reflect on the thesis of the retrospective and its impact, and that of Varnedoe, on Pollock studies; Helen Harrison, a Pollock biographer and director of the Pollock-Krasner House and Study Center, will discuss Pollock’s use of commercially dyed red fabric in several of the frieze paintings and consider the meaning of this aesthetic choice for Pollock’s work; and Ellen G. Landau, Andrew W. Mellon Professor of the Humanities, Department of Art History and Art, Case Western Reserve University, will represent new directions in Pollock scholarship. Landau, who has written extensively on Lee Krasner as well as a major study of Pollock’s artistic career, will discuss how his friendship with photographer Herbert Matter had an impact on Pollock’s work.

Placing this exhibition in the context of the history of the Williams College Museum of Art, director Lisa Corrin will conduct an anecdotal conversation between S. Lane Faison ’29, former director of the Museum, who brought the first survey of Pollock’s work, curated by Clement Greenberg, to WCMA from Bennington College in 1952, and Steve Gordon, Williams Class of 1955, a practicing artist who reviewed that exhibition for The Williams Record. Professor Faison and Mr. Gordon will reminisce about what it meant to present a Pollock exhibition at Williams just as the artist’s career was on the rise, as well as describe Pollock’s visit to the Williams campus to attend the exhibition opening.

“This is a wonderful opportunity for the community to learn more about the conservation process and what can be discovered by looking at art from different perspectives and different methodologies- that of the conservator, art historian, biographer, and curator," said Director Lisa Corrin. “We are so fortunate to hang in our galleries three major works by Pollock and to welcome to Williams some of the world’s most distinguished scholars who have contributed significantly to our understanding of Pollock’s life and work. This is a fitting tribute to Kirk Varnedoe ’67, one of the finest graduates of Williams’ noted art history program. I am grateful to Elyn Zimmerman, Kirk’s wife, for her support of this project and to alumni families like the Plonskers, whose generosity make stellar programming like this a reality for WCMA. This is a landmark event that our students will always remember as a highlight of their experience of art at Williams."

The Plonsker Family Lecture Series was established in 1994 by Madeleine Plonsker, Harvey Plonsker (Class of 1961), and their son Ted Plonsker (Class of 1986), to examine current issues in contemporary art. Jackson Pollock: Beneath the Surface is a tribute to Kirk Varnedoe (1946-2003), Williams Class of 1967. Varnedoe was the Chief Curator of Painting and Sculpture at the Museum of Modern Art, New York. A bold and visionary curator, he was well regarded for his intellectual curiosity and imaginative thinking. He taught at the New York Institute of Fine Arts and was awarded a MacArthur “genius" Fellowship in 1984. He died in 2003 at age 57.

Tom Branchick is the director of the Williamstown Art Conservation Center and co-curator of the exhibition Jackson Pollock at Williams College.

Lisa Graziose Corrin is the Director of the Williams College Museum of Art. She previously held the posts of Chief Curator at The Contemporary Museum (Baltimore), Chief Curator at the Serpentine Gallery (London), and Deputy Director of Art at the Seattle Art Museum. She is the artistic lead on the new Olympic Sculpture Park opening in Seattle in October 2006.

Adam Gopnik is an essayist-at-large for The New Yorker. His publications include Paris to the Moon (Random House, 2001). He was a former student and friend of Kirk Varndoe ’67.

Steve Gordon is a Williams College graduate from the Class of 1955. He received his Masters degree from Columbia Teachers College and taught art for twenty-five years at White Plains High School in New York. He is a published author and artist.

Helen Harrison is the director of the Director, Pollock-Krasner House and Study Center in East Hampton, New York, and an adjunct instructor in the art department at the State University of New York at Stony Brook. She is an art critic and feature writer for The New York Times Long Island section and a fine art commentator on WLIU, Southampton, an NPR affiliate. She is the author of Such Desperate Joy: Imagining Jackson Pollock (Thunder's Mouth Press, 2000). Her most recent book is Hamptons Bohemia: Two Centuries of Artists and Writers on the Beach (Chronicle Books, 2002), co-authored with Constance Ayers Denne.

Pepe Karmel is Associate Professor in the Department of Fine Arts, New York University. His book, Picasso and the Invention of Cubism, was published by Yale University Press in 2003. He organized the 1989 exhibition, Robert Morris: Felt Works, at the Grey Art Gallery and Study Center, New York University, and was co-curator of the 1998 retrospective, Jackson Pollock, at the Museum of Modern Art, New York. He has contributed to numerous other exhibition catalogues, and has written widely on modern and contemporary art for publications including Art in America and The New York Times.

Ellen G. Landau is Andrew W. Mellon Professor of the Humanities at Case Western Reserve University. Her publications include Jackson Pollock (Abrams, 1989) and Lee Krasner: A Catalogue Raisonne' (Abrams, 1995), as well as numerous essays in U.S. and European journals and exhibition catalogues. Co-curator of a Krasner/Pollock joint retrospective (Kunstmuseum Bern, 1989-90), she is currently organizing Pollock Matters, an exhibition and book that demonstrates the personal and aesthetic interrelationship of Pollock and Krasner with Herbert Matter and his wife, the painter Mercedes Matter.