Uptown hosts the nationally acclaimed Metris Uptown Art Fair, which draws more than 385 artists and 300,000 art lovers from across the nation. It also hosts other special events and promotions and is a favorite meeting place for thousands of Minnesotans and others who enjoy recreation on and near Minneapolis city lakes. The proceeds raised from the art fair go toward street cleaning, snow removal, member support and promotional events for the Uptown area of Minneapolis. 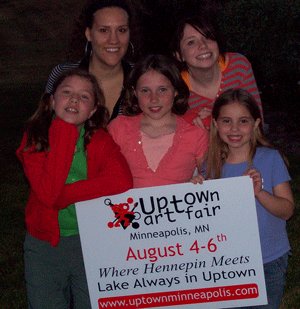 As the Uptown Association's primary fundraising event, the Uptown Art Fair is an economic engine for the community, generating revenue that pays for Uptown projects including extra security officers, sidewalk cleaning, street lighting, the annual printing of a comprehensive business and tourism directory and the funding of holiday events. What began 40 years ago as a small event with artists propping their pieces up against the curb to sell their wares, has grown into a nationally recognized, three-day fine arts festival attracting more than 300,000 people in one weekend.

The Uptown Art Fair is a true success story, but it hasn't been easy

In 1963, three Uptown businessmen got together to map out the first Art Fair, and in so doing created a piece of Minnesota history. Advertising pro Gene Nieland, Bob Harris of Harris Hardware and Northwestern Bank's Frank Weaver met as part of the Uptown Commercial Club to strategize how to breathe life back into the corner of Lake Street and Hennepin Avenue. Times had been hard on the area, and these pioneers saw opportunity on the horizon.

What emerged from that meeting was the Uptown Art Fair...

Their vision of the Uptown Art Fair was to bring art to the people, draw people to Uptown and provide a showcase and sales outlet for both professional and amateur artists from around the Minneapolis area. The Minneapolis Institute of Art was a key player in the planning and presentation of the first Art Fair, and selected artists were asked to donate an item for an auction to help defray the costs of the event.

The first year of the Uptown Art Fair was difficult to say the least. Organizers practically had to beg people to attend the first fair. But things got better just one year later. In 1964, nearly 75,000 people attended the Art Fair to view work from 75 artists! The art featured a mix of professional work as well as arts and crafts with a wide range of quality. This wide disparity between good art and bad art (yes, Virginia, there is a difference!) would soon catch up to organizers of the Fair.

It happened in the late 60s when the Art Fair's quality dropped to such a low that consideration was given to actually ending the show. There were economic concerns as well: artists were charged only $15 to cover needs like advertising, security and clean-up, which in no way covered expenses. And, from a quality standpoint, artists were allowed into the Fair to exhibit on a first-come, first-served basis with little if any quality control.

Things were not looking good

To add to the woes of the era, large malls were developed in the burbs that took quite a bit of business away from Uptown. The Art Fair had to fight even harder to bring people to the area. In fact, the Art Fair gave many their first experience of the quality of this unique and diverse commercial district. In 1975, the Hennepin-Lake Improvement District was created to organize the Fair and to bring continuity to the planning and promotion of the area.

Problems continued to plague the Art Fair in its early going. It was tough for organizers to stay true to the original mission of the fair: to bring quality art to a large number of people and give artists an opportunity to expose their art to the public and sell it at reasonable prices. The quality of art continued to diminish as pet rocks began to take precedence over professional paintings. Unregistered exhibitors also presented a problem for organizers.

In 1985, the Uptown Association was formed as a merchant's association in the Uptown commercial district, and they became the producers of the Art Fair. After years of struggling, the Fair had new organizers, and new ideas. One of the key changes that organizers made was in the requirements for artists to participate. Instead of basing acceptance on a first-come, first-served system, new artist applicants were required to submit slides of their work to be juried.

This change brought immediate improvement in the quality of the Fair

A five-member committee (jury) set the standards for new applicants who were judged on four major criteria: impact, originality, intention and craftsmanship. Exhibitors from years past escaped the new jury requirements the first year of its establishment under a grandfather clause. The jury requirement was initiated because the quality of the art, and therefore the caliber of the show, was perceived by many to have dropped considerably. What was on display was not truly art, and this led organizers to the conclusion that unprofessional art would discourage talented artists from returning to the Fair.

They were right on the money

The quality of the show improved dramatically over the next decade, and the number of artists jumped to 600. These 600 exhibitors were then juried by professionals who reviewed their work during the weekend of the Fair. Approximately 20 percent of those 600 were then given invitations based on their quality of exhibition to return the following year without having to submit an application. Those with lower scores were required to submit slides the following year.

Organizers began to lower the number of exhibitors in the early 90s from 600 to 450 in order to continue to improve the caliber of art in the Fair. While some artists felt snubbed by this decrease in numbers (it increased the competition!), it has become one of the primary reasons that the Uptown Art Fair is one of the top 10 fine arts festivals in the country.

In 1992, commemorative art prints were issued for the first time. Organizers asked an artist from the Fair to create a piece to be sold at that year's fair. This tradition has continued, allowing visitors to collect limited edition pieces of artwork.

Metris Companies, one of the nation's leading providers of financial products and services, became title sponsor of the Uptown Art Fair in 2000. Along with their sponsorship, the Uptown Association and Metris began Metris Creates, a program that allows students and teachers from five local schools to create collaborative public art pieces. Students learn how to take an idea from their imagination and turn it into a permanent expression in visual art through an artistic process.

The 2006 Uptown Art Fair will prove to be an event for all ages. Adults can appreciate the fine art and night-time entertainment while kids can sell their own masterpieces in the Tomorrow Stars Seen Today Art Fair presented by Principal Global Investors and Calhoun Square. From its inception in 1963 to the annual event that it is today, the Uptown Art Fair is truly one of the top fine arts festivals in the Midwest.

Young people are bursting with artistic energy. And Tomorrow’s Stars Seen Today Art Fair is a fun way for boys and girls to express themselves visually and encourages the creative growth of young people. We believe that they can develop their artistic potential through personal expression in individually crafted, original objects.