Videoart and architecture event. Our age, already fascinated by the 'liquid architecture in cyberspace', liquid identities and everyday liquid contacts between people, is focused on lightweight infrastructures in motion. Curated by Luca Curci. 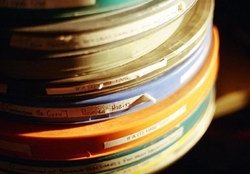 Liquid Room is an exciting show of video-art, a form of art which is also itself a kind of liquid architecture, very closed to the fluidity, transparency and vagueness of the inner life. Our post-literary age, already fascinated by the 'liquid architecture in cyberspace' (Marcos Novak), liquid identities and everyday liquid contacts between people, is focused on lightweight infrastructures in motion, the 'musical' structures of light, sound and colours, the ability to transform visual arts into urbanism shows or the real need to sense the reality as a fluid network of individuals, art and technology. I imagine The Liquid Room as a kind of metaphysical box where the liquid walls become the tools for the unificatioon of codes (visual, verbal, sonor or kynetical) in our strange spiritual transition from the stability of things to the mobility of the images. The narrativity of such new forms is far of equilibrium, non-aristotelian and focused on jump, intuition and synthesis, on interactivity, integration and immersion. (Constantin Severin)

The Cultural Communication Center of Klaipeda has functioned from 2004, when The Artists' House of Klaipeda, which was established in 1987, was reorganized. The Cultural Communication Center of Klaipeda is a cultural institution of the Klaipeda municipality. The Cultural Communication Center promotes cultural exchange programs, and gives living and creating facilities in the town of Klaipeda to the artists of Europe and world. The Center initiates and inspires artistic-cultural dialogue between Klaipeda and other towns of Lithuania and at the same time provides artistic and cultural training to foreign artists. Klaipeda is a unique city in Lithuania and probably in all the Baltics because of its half-timbered house building style, a style that was popular in the Western Europe. Half-timbered house is a construction style when the shell is built wooden and the gaps are filled with bricks or clay. Such buildings are lighter and they don't need firm substructure. That's why it was very applicable to Klaipeda that was being built in a low and swampy place by the fall of river Dange. Temporary Cities festival will be in the Artists' yard, which is surrounded by half-timbered houses.