The exhibition revolves around the artists featured in the Focus Programmes of the International Film Festival Rotterdam. In three linked solo presentations, Paul Sharits, Robert Breer and Cameron Jamie demonstrate how self-willed pioneers of experimental film are once again relevant for the latest generation of audiovisual iconoclasts. 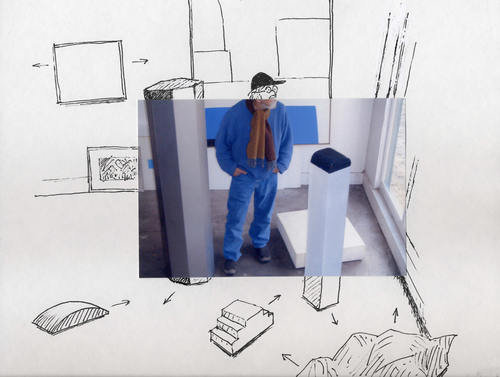 The exhibition 3Radicals revolves around the artists featured in the Focus Programmes of the International Film Festival Rotterdam. In three linked solo presentations in TENT., Paul Sharits, Robert Breer and Cameron Jamie demonstrate how self-willed pioneers of experimental film are once again relevant for the latest generation of audiovisual iconoclasts.

Paul Sharits (USA, 1943 -1993) is the pivotal figure in the annually recurring Exploding Cinema programme. Sharits made films about film: his themes are the image frame, the emulsion, the perforation, and the filmstrip. He began in the mid sixties as a Fluxus artist and died in 1993, and yet he can still serve as a model for an entire generation of digital radicals, who combine mathematical precision with an aggressive directness. Sharits’ aim was to make radicalising art, whether in the form of films, installations, objects or drawings.

The multifaceted work of Artist in Focus Cameron Jamie (USA, 1969) consists of drawings, sculptures, videos, and even a self-created urban legend regarding his own person. This led, among other things, to the highly diverse film trilogy Kranky Klaus, Spook House and BB. The soundtracks of these films will be performed live during the festival. The recent series of drawings presented in TENT. under the title ‘Carved Ink’ lie somewhere between anatomical studies, a visual score, and psychotic hallucinations.

Although he began as a painter in the Mondriaan tradition, Filmmaker in Focus Robert Breer (USA, 1926) has been steadily working for half a century on extending his oeuvre, which alternates between hyper-kinetic short films and sculptures that move at a snail’s pace. From abstract experimental short films, to animations for children’s television or a music video for New Order (Blue Monday, 1988) – Breer makes no distinction between the serious and playful, the monumental and miniscule. Breer shows a large number of kinetic sculptures and related works in TENT. The pieces span a period of five decades of artistic practice.

The artists Robert Breer and Cameron Jamie will be present at the opening.
On 24 January from 18.00 hrs, the art institutes in the Witte de Withstraat open their new exhibitions in the framework of the IFFR: Tent, Witte de With, Showroom Mama, Roodkapje, former Fotomuseum.

During the IFFR: extensive film and video programme with film works by the exhibiting artists and work by a selection of young artists. For precise locations, dates and times, consult the festival literature or go to http://www.tentrotterdam.nl
http://www.filmfestivalrotterdam.com