The exhibition 3Radicals revolves around the artists featured in the Focus Programmes of the International Film Festival Rotterdam. In three linked solo presentations in Tent, Paul Sharits, Robert Breer and Cameron Jamie demonstrate how self-willed pioneers of experimental film are once again relevant for the latest generation of audiovisual iconoclasts. The evening will end with a show by artist Marc Bijl and his band. 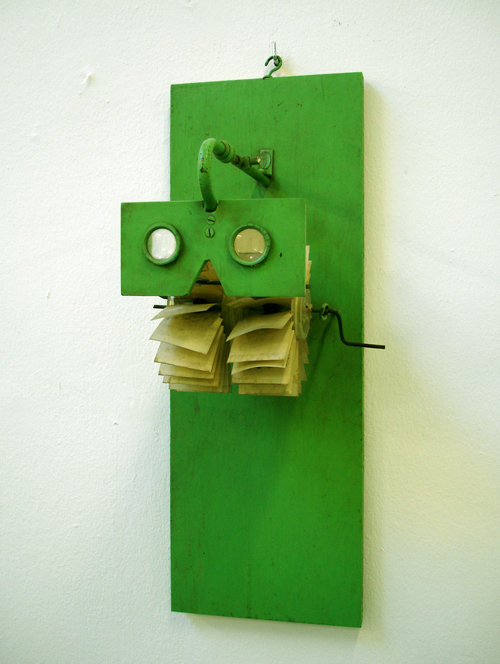 On 7 February, in association with Art Rotterdam, after the Cornerstones lecture Witte de With will remain open until 10 p.m. For this occasion, TENT. has organized an elaborate evening program downstairs.

With the thematic programme Free Radicals, the International Film Festival Rotterdam turns the spotlight on artists who wilfully and vigorously steer their own course. Three central figures in this festival programme each receive a solo presentation in TENT.: Paul Sharits, Robert Breer and Cameron Jamie.

... Paul Sharits (1943 -1993) is the pivotal figure in the annually recurring Exploding Cinema programme. Sharits made films about film: his themes are the image frame, the emulsion, the perforation, and the filmstrip. Epileptics should avoid his oeuvre, because Sharits enjoys bombarding the viewer’s nervous system with a barrage of images. He began in the mid sixties as a Fluxus artist and died in 1993, and yet he can still serve as a model for an entire generation of digital radicals, who combine mathematical precision with an aggressive directness. Sharits’ aim was to make radicalising art, whether in the form of films, installations, objects or drawings. His objects and film installations can be seen in TENT.
...The multifaceted work of Artist in Focus Cameron Jamie (USA, 1969) consists of drawings, sculptures, videos, and even a self-created urban legend regarding his own person. Cultural excesses that occur on the edge of society are an unmistakable source of inspiration, such as eating marathons, extremist hero-worship and Halloween parades. This led, among other things, to the highly diverse film trilogy Kranky Klaus, Spook House and BB. The soundtracks of these films will be performed live during the festival. The themes in Jamie’s work are wide-ranging, but societal aggression, folkloric traditions and social conventions remain the leitmotiv in his projects. The recent series of drawings presented in TENT. under the title ‘Carved Ink’ lie somewhere between anatomical studies, a visual score, and psychotic hallucinations.
...Although he began as a painter in the Mondriaan tradition, Filmmaker in Focus Robert Breer (USA, 1926) has been steadily working for half a century on extending his oeuvre, which alternates between hyper-kinetic short films and sculptures that move at a snail’s pace. From abstract experimental short films, to animations for children’s television or a music video for New Order (Blue Monday, 1988) – Breer makes no distinction between the serious and playful, the monumental and miniscule. His simple, sympathetic, but also lucid and philosophical work is due for a remarkable resurgence. The latest phase in his oeuvre is the panoramas: meters-long viewing cabinets. Breer shows a large number of kinetic sculptures and related works in TENT. The pieces span a period of five decades of artistic practice, as a contemporary and kindred spirit of Fluxus as well as Pop Art, Op Art and the happenings, but at the same time Breer has always remained in a category of his own.
... As an introduction to 3Radicals, the visitor comes face to face with a waxwork figure of Joseph Plateau (1801 – 1883). The scientist Plateau can be regarded as a distant precursor of the animated film, Op Art and especially of experimentation as a way of life. In 1829 he stared directly into the sun, radically and consistently, for minutes at a time. This experiment resulted in Plateau constructing a series of colour discs. With the discs, he created moving figures and drawings.

Thu 7.2, 2008 [20.00h] Art Rotterdam Night 2008
At the start of 2008, Rotterdam’s artists and cultural producers shed their light on the state of affairs in the arts in Rotterdam, with columns, performances and statements. As part of the annual art fair Art Rotterdam, the entire building on the Witte de Withstraat 50 is open to the public from 18.3oh. The exhibitions in TENT. and Witte de With can then be visited.