All That Is Solid Melts into Air

The five exhibitions offer us different ways of dealing with the world. Since the beginning of the modern period, art has formed an important new basis for man as he seeks values and standards, spirituality, a role of his own and a personal approach in an uncertain world. The title 'All That Is Solid Melts into Air' refers to a passage in the communist manifesto by Marx and Engels. These are visionary words, as communism itself has evaporated and capitalism has also lost its way. As the same time it questions the secular, in all manner of forms ranging from fundamentalism to New Age. 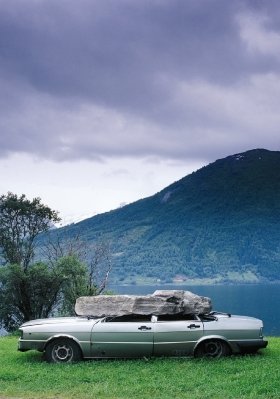 In the shadow of St. Rombold’s cathedral, five of the museum’s curators will be bringing together 100 artists. In five exhibitions – which complement one another both visually and in content – they offer us different ways of dealing with the world. Since the beginning of the modern period, art has formed an important new basis for man as he seeks values and standards, spirituality, a role of his own and a personal approach in an uncertain world. In the 60s Bruce Nauman said ‘The true artist helps the World by revealing mystic truths.’ The true artist helps society by asking the Big Questions over and over again, without shame or fear, and offering it many small answers.

The title All That Is Solid Melts into Air refers to a passage in the communist manifesto by Marx and Engels. These are visionary words, as communism itself has evaporated and capitalism has also lost its way. As the same time it questions the secular, in all manner of forms ranging from fundamentalism to New Age. The quotation has inspired the MuHKA to create an exhibition that explores what our future space might look like. What will happen when the mist clears? The new awareness of art established by modern art might be a place where one could think about this. In an exhibition where you encounter both art and God and which presents us with different visions of reality and the future.

NOT NOTHING
The first part of the exhibition, which will be held in De Garage, is presented by the curator Edwin Carels. Not Nothing zooms in on the effect on our perceptions of an overmediatised society. What is virtual? What is a level-headed view? A study of the zero point of perception plays a central role here, resulting in a crystallisation of the transient: art which helps us to observe our inner space. The basis for Not Nothing is provided by the stereographic images created by the Belgian professor Joseph Plateau (1808-1883), whose ambition was to present moving pictures. The exhibition was created in close collaboration with the British duo of artists Al and Al. In a blue-key studio they create various virtual worlds with bizarre scenarios that evolve from the extremely minimal to digital baroque.

MAN MADE
The second part is housed in the Oude Minderbroeders church, which has been transformed into an exhibition space. Here the curator Liliane Dewachter will present her exhibition Manipulable Man, based on the idea of man as the ultimate work of art. Through body art and performance art, in which the focus is on artists who use their body as a medium, it reflects on the parable of the manipulability of man. The Cuban artist Susanna Pilar Delhante Matienzo is usually physically present in her performances, many of which deal with discrimination and violence against women. On the other hand, the video and film work by the Belgian artist Frank Theys focuses on the fascination for technology and science and the effect this has on the world.

THE WORK
The curator Bart De Baere unfolds his view of The Work in semi-public spaces: from the cathedral to the children’s observatory in the Scheppers Institute, with at its centre the academy and the cloisters around the courtyard of the Cultural Site. In this social space, art is approached as something performative. This view of art focuses on neither the artist nor the product, yet at the same time does not avoid the important political and social issues. The American artist Joseph DeLappe examines politics, war, work, play, protest and the relationship between man and machine through various new uses of the media. For example, in Second Life he steers his Gandhi avatar with a special walking frame. Together with students at the academy in Mechelen he reconstructs his four-metre-high cardboard statue of Gandhi. The Vietnamese artist Dinh Q. Lê often uses a combination of real and imaginary memories of the Vietnam War as his theme.

THE THING
The presentation by the curator Dieter Roelstraete is housed in the ‘classical’ exhibition spaces at the Cultural Centre in Mechelen. In this exhibition it is not so much the artist, artistry or artistic practice that plays a central role as the work of art as a thing: nothing more and certainly nothing less. Since the second half of the 80s, Jos de Gruyter and Harald Thys have cooperated on visual work, work on paper, videos and sound art. They will be creating a new work for this exhibition. The artist Goshka Macuga was nominated for the Turner Prize in 2008. Her life-size portrait of a levitating Madame Blavatsky questions the boundary between man as a lifeless object and the object as a living being that can be animated.

SEARCH FOR THE SPIRIT
Search for the Spirit exhibition compiled by Grant Watson is housed in the monumental theatre at the Scheppers Institute. Here the everyday magic of art, which enables us to constantly transform ourselves and the world around us, plays a central role. Based on the earlier works of General Idea and Image Bank, the exhibition fans out in a multiplicity of related materials most of which have been dug out of archives. Luis Jacob reinterprets Mark Rothko’s well known paintings using an old-fashioned typewriter. Earlier this year the artist Yael Davids gave a series of workshops on conjuring and circus acts for the inmates of the prison in Mechelen, which we will be able to see here on video.