The Round Robin Collective

A group exhibition and a series of events 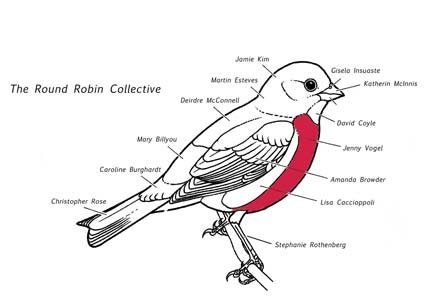 The Round Robin Collective is pleased to announce ECSTATIC, an exhibition and series of events to be held in the former convent of St. Cecilia’s Parish in Greenpoint, Brooklyn.

For four weeks, The Round Robin Collective - along with a group of invited artists - will populate the four-story maze of private rooms, living spaces, stairwells, and alcoves previously occupied by nuns. Taking varied approaches to the installation of their separate rooms, individual artists and collaborative teams will present recent works or will respond directly to the building, imbued with its unique history and sacrosanct aura. While some of the participating artists’ work deals directly with notions of ecstasy, the title of the show does not allude to an overt theme in the work presented; rather, it refers to the process of making and encountering art and the results produced from inspired relationships. Like the mental transport or rapture that can exist in the contemplation of the divine, the experience of creating and considering art can trigger moments of ecstasy.

Curated screenings, workshops, and performances will be held weekly in the former chapel of the convent. Events include: opening party music by Donny Hue and the Colors as well as Irvin Morazan’s "Musical Chair Performance," an homage to Saint Cecilia, the patron saint of musicians (3/12); an evening of sound performances with Lary 7, Flying Teeth, and Doom Trumpet (3/13); "Low-Resolution Stories," live cinema with Jenny Vogel and Ofri Cnaani followed by music with Chatter Blip (3/19); "The Alternative Art Space Movement in NYC," a panel discussion with Erin Sickler, Herb Tam, Rob de Oude, and EmCee C.M., Master of None moderated by Mary Billyou (3/20); music by Toys n Tiny Instruments followed by "Diamonds in the Sky," a evening of film/video curated by John Passmore (3/20); "Escape from the Orgone Box: Houdini & Reich on Film," an evening of film with live soundtracks by Séance presented by Bradley Eros and Marianne Shaneen (3/26); a collective sewing day with Amanda Browder for the construction of the public artwork, "Future Phenomena" (3/27); an empanada and tamale demonstration/potluck event hosted by Gisela Insuaste and Irvin Morazan (3/28); closing the exhibition, a film/video screening curated by Jem Cohen (4/3); additional events to be announced. Details and updates regarding all the events are available on our web site.

The Round Robin Collective is a Brooklyn-based group of artists established in 2008 to forge connections and create a space for dialogue in and out of the studio. Meeting for monthly studio visits, members of the collective work in all media, fostering a dynamic exchange across disciplines and outside the commercial sphere.

"Escape from the Orgone Box: Houdini & Reich on Film," presented by Bradley Eros and Marianne Shaneen with music by Seance.
Friday, March 26, 7-10 pm $8
(wine will be served starting at 6 pm)

A collective sewing day for the construction of "Future Phenomena," a public art piece with Amanda Browder (in association with the North Brooklyn Art Coalition)
Saturday, March 27, 1-4 pm

All fees are suggested donations and all other events are free!