Two sweeping exhibitions that chronicle both these pivotal moments in the nation's history and its legacy surveyed through the works of young African-American artists. The first, 'Road to Freedom: Photographs of the Civil Rights Movement, 19561968', features 150 vintage photographs that revealed shinning glimpses of equality and unity amongst its citizens. 'After 1968: Contemporary Artists and the Civil Rights Legacy' includes works from seven African-American, emerging artists and collectives who have created new work examining the heritage of the Civil Rights Movement and its affect on the lives of this new generation. 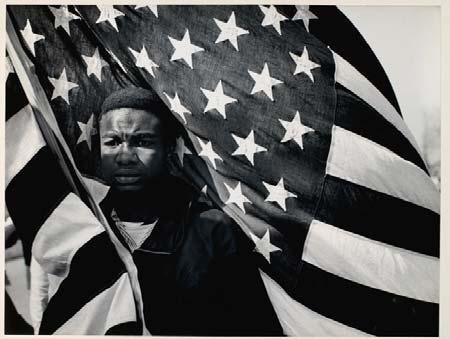 Bronx, NY – During the span of twelve years, a series of events, later hailed as the Civil Rights Movement, would forever change the social and political course of America. From March 28 – July 11, 2010, The Bronx Museum of the Arts will present two sweeping exhibitions that chronicle both these pivotal moments in the nation’s history and its legacy surveyed through the works of young African-American artists.

The first, Road to Freedom: Photographs of the Civil Rights Movement, 1956–1968, will feature 150 vintage photographs; images that not only exposed rampant acts of discrimination in America’s past, but also revealed shinning glimpses of equality and unity amongst its citizens. Road to Freedom is the most comprehensive collection of photographic prints and related artifacts ever devoted to the subject and was organized by the High Museum of Art in Atlanta to commemorate the 40th anniversary of Dr. Martin Luther King, Jr.’s assassination.

Road to Freedom includes images by renowned photographers such as Bob Adelman, Bruce Davidson, Danny Lyon and Charles Moore; its oeuvre beginning with Rosa Parks’ refusal to surrender her seat aboard a Montgomery, Alabama bus in 1956 and culminating with the assassination of Dr. King in 1968. The exhibition also documents key events such as the Freedom Rides in 1961; the March on Washington in 1963; the hosings at the Kelly Ingram Park in Birmingham, Alabama the same year; and the Selma-to-Montgomery Voting March in 1965, which led to the signing of the Voting Rights Act by President Lyndon Johnson months later. These images highlight the heroes and leaders of the civil rights movement, figures such as Dr. King; Rosa Parks; Stokely Carmichael, leader of the Student Nonviolent Coordinating Committee (SNCC); voting rights activist Fannie Lou Hamer; John Lewis, chairman of SNCC who played a key role in ending segregation; and lesser-known individuals, who valiantly sacrificed their lives for liberty.

“Road to Freedom demonstrates the powerful impact of photography and how instrumental the documentation of Civil Rights events was in achieving its success,” says Holly Block, Executive Director of The Bronx Museum of the Arts. “The photographs served to enlist supporters, increase awareness of the inequalities faced by African-Americans, raise funds for the cause, and even free those jailed for resisting discrimination.”

As a complement to Road to Freedom, The Bronx Museum will also present After 1968: Contemporary Artists and the Civil Rights Legacy. This smaller exhibition includes works from seven African-American, emerging artists and collectives—all born on or after 1968—who have created new work examining the heritage of the Civil Rights Movement and its affect on the lives of this new generation. They include Deborah Grant, Leslie Hewitt, Otabenga Jones and Associates, Adam Pendleton, Jefferson Pinder, Nadine Robinson and Hank Willis Thomas. Using the movement as inspiration, context or critique, these artists address their own personal understanding of race, identity, American violence, and political activism providing new perspectives on and discourse about this critical time in the history of the United States.

The artists’ diverse approaches include Deborah Grant’s 24 wood panels painted in red, collaged with images from the civil rights movement. By taking these images out of context and juxtaposing them, she creates a dialogue about the images, leading viewers to draw their own conclusions about the events. Hank Willis Thomas takes advertising images portraying African-Americans addressing the tension between commodity and race. Nadine Robinson offers a more personal and autobiographical approach through her sound pieces, emitting musical compositions of both black and white musical culture and often alluding to the 1963 hosings at Kelly Ingram Park by mixing sounds of rushing water with excerpts from protest speeches.

Since debuting at the High Museum of Art in June 2008, Road to Freedom and After 1968 have traveled to the Smithsonian National Museum of African American History and Culture in Washington, DC, the Field Museum in Chicago, and the Skirball Cultural Center in Los Angeles, where it will be on view November 19, 2009 – March 7, 2010. The Bronx Museum, the only New York City venue to present these exhibitions, will serve as the final stop.

Road to Freedom and After 1968 are accompanied by two catalogues published by the High Museum of Art. Road to Freedom: Photographs of the Civil Rights Movement, 1956–1968 (2008, 159 pages, $25) includes essays by Julian Cox, the High Museum’s Curator of Photography, writer Charles Johnson, and U.S. Representative John Lewis. After 1968: Contemporary Artists and the Civil Rights Legacy (2008, 64 pages, $10) includes an essay by Jeffrey D. Grove, the Weiland Family Curator of Modern & Contemporary Art.

On Friday, March 26, 2010, at 7:00pm, The Bronx Museum will hold a panel to celebrate the launch of Road to Freedom and After 1968 at The New School (66 West 12th Street, between 5th and 6th Avenues). Panelists will include High Museum of Art curator Julian Cox; Bronx- born photographer Doris Derby; photo-journalist Eric Etheridge; photographer LeRoy Henderson; After 1968 artist and Bronx Museum AIM alumni Nadine Robinson; and gallery owner, writer, and curator Steven Kasher. The event will be moderated by Deb Willis, Tisch School of the Arts, NYU. Additional public programs to be scheduled. Please visit http://www.bronxmuseum.org for the latest schedule.

Road to Freedom: Photographs of the Civil Rights Movement 1956-1968 is organized by the High Museum of Art, Atlanta. This exhibition is supported by the Robert Mapplethorpe Foundation and an award from the National Endowment for the Arts, which believes that a great nation deserves great art.

After 1968: Contemporary Artists and the Civil Rights Legacy is organized by the High Museum of Art, Atlanta. This exhibition is supported by The Andy Warhol Foundation. The Bronx Museum of the Arts’ presentation of these exhibitions is sponsored by American Express and Bloomberg. Additional support has been provided by Cher Lewis, The O’Grady Foundation, George Mills, Robert and Joyce Menschel Family Foundation and an anonymous supporter.

Founded in 1971, The Bronx Museum of the Arts is a contemporary art museum that connects diverse audiences to the urban experience through its permanent collection, special exhibitions, and education programs. Reflecting the borough's dynamic communities, the Museum is the crossroad where artists, local residents, national and international visitors meet. The museum’s home on the Grand Concourse is a distinctive contemporary landmark designed by the internationally-renowned firm Arquitectonica.