The exhibition includes more than 75 works of art - including paintings, sculpture, prints, installation art, photography, and video - by artists who have altered the direction of art over the past five decades, and in some cases challenged our basic conceptions about art. Artists represented include modern masters as well as those emerging on the scene, such as Siah Armajani, Willie Cole, Mona Hatoum, David Hockney, Ilya Kabakov, Yayoi Kusama, Takashi Murakami, Claes Oldenburg, Nam June Paik, Cindy Sherman, Yinka Shonibare, and Andy Warhol, among others. 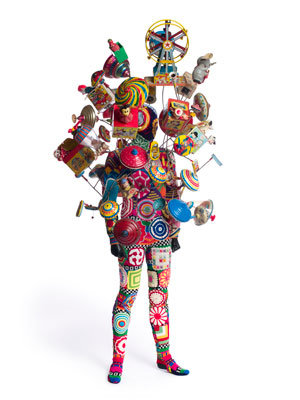 The Minneapolis Institute of Arts (MIA) celebrates its new commitment to contemporary art with Until Now: Collecting the New (1960–2010). Opening April 16, 2010, the exhibition includes more than 75 works of art—including paintings, sculpture, prints, installation art, photography, and video—by artists who have altered the direction of art over the past five decades, and in some cases challenged our basic conceptions about art. Artists represented include modern masters as well as those emerging on the scene, such as Siah Armajani, Willie Cole, Mona Hatoum, David Hockney, Ilya Kabakov, Yayoi Kusama, Takashi Murakami, Claes Oldenburg, Nam June Paik, Cindy Sherman, Yinka Shonibare, and Andy Warhol, among others.

Presenting a fresh vision of contemporary art, Until Now: Collecting the New builds on the strengths of the MIA’s renowned encyclopedic holdings, while borrowing strategically from a range of artists, collectors, and galleries. “The MIA’s collections are broadly international and rich in their representation of historical periods, aesthetic styles, and global cultures,” says Elizabeth Armstrong, MIA’s curator of its new Department of Contemporary Art. “Seeing contemporary art in the context of these diverse cultural forms and historical periods offers visitors new insights and perspectives on art’s significance and meaning.” In conjunction with the exhibition, selected works of contemporary art will also be on view throughout the museum in a variety of juxtapositions with the museum’s wonderfully rich and diverse historical holdings.

The Until Now exhibition is organized around general themes that encompass a broad range of global art activity that cuts across time, cultures, and other borders. Reflecting significant trends in the recent history of art, these themes are: “New Poetics,” “Reviving Realism,” “Poptical,” “Recuperation,” and “Passages.”

The first theme, “New Poetics,” looks at the rejection of representational art in favor of abstraction, which came in the wake of World War II. Since the 1950s, generations of artists have explored a pictorial language based on vivid color, energetic brushwork, simple forms, and emphatic markings. In these “new poetics” of abstraction, pure form and color offer inner meaning through contemplation.

A very different aesthetic approach is found in “Reviving Realism,” which examines the work of artists who focus on representation and external reality above all else. Out of vogue during much of the 20th century, representational realism is enjoying a resurgence as artists throughout the world use figurative forms and approaches to explore nature, culture, and issues of identity.

The exhibition section devoted to “Poptical” reflects the widespread impact of popular and consumer culture on art over the past fifty years. Pop Art dominated the art scene of the 1960s, celebrating the new dynamism of consumer goods, advertisements, and popular press. Today, thanks to globalization and the mass media that allow goods and images to move freely across national borders, pop culture has spread to almost every corner of the globe, and Neo-Pop has become a worldwide artistic language.

On the flip side of the fascination with Pop, artists have been recycling trash, scrap, and the detritus of material culture. The artworks in “Recuperation” are constructed out of these products themselves, rather than their images, with materials scavenged from trash bins, flea markets, and antique stores—and transformed into powerful and often witty configurations.

National and individual identities are in constant flux as borders change, people migrate, and digital technology allows for speedy communication. The works in “Passages” consider the profound disorientation felt by many in our increasingly diverse world, where both national and individual identities are rapidly shifting. The impact of globalization on nearly every aspect of contemporary culture is reflected in the wide range of artists, alternative forms, and diverse perspectives represented in this final section of the exhibition.

“Until Now” and Contemporary Art at the MIA

Until Now: Collecting the New is organized by Elizabeth Armstrong, who is also the MIA’s Assistant Director of Exhibitions and Programs. It is part of a larger series of contemporary art initiatives being developed at the MIA, that will include new exhibitions and public programs, increased emphasis on acquisitions of contemporary art, and a program of collaborations with artists in the galleries and across museum departments. Already, since Armstrong’s arrival and the hiring of David Little as head of the Department of Photography and New Media, the museum has initiated an exhibition series titled “New Pictures,” devoted to featuring innovative work in new media. Also this year, an ongoing program of artists’ residencies at the MIA has begun, connecting 21st-century audiences with the experience and power of contemporary and historical art.