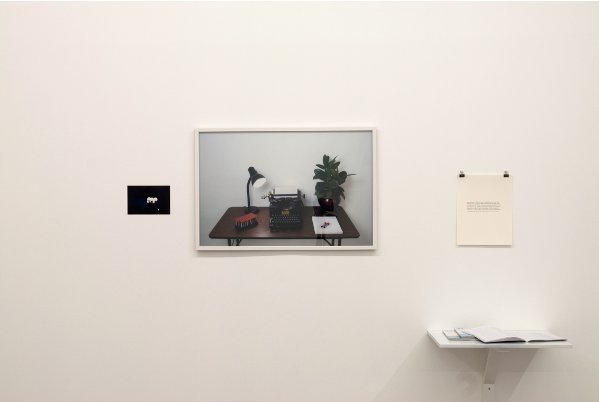 While been invited with existing works that have been shown before, both artists’ works are about cities of today and the intention is a dialogue between their work. But in the opposite way each work is given its own space.

Issa’s Triptych series (#1, #2, #3, #4, #5, #6) from 2009, is a group of six beautiful wall installations comprised of photography, video objects and texts. They are images of places she collected in New York and restaged; settings that occurred through a personal psychological process in order to reveal personal associations. As Issa says “At one point I realized that what might have attracted me to these spaces was that they reminded me of others…. In trying to be as precise as possible, I realized that the certainty with which I was able to construct and produce these images did not translate to my final photographs, that I no longer recognized my constructions.”

The Triptychs surround Altay’s sculpture that sits in the centre of the room. Deposit (Spring Deficit: After Dubai, After Hammons, and after the politics of white noise),is a mirror table that functions as a fountain and instead of water it circulates sand. A huge speaker becomes the foundation of the sand dune that moves and shakes according to the rhythm of the score. A fountain has obvious art historical references from Marcel Duchamp to Bruce Nauman but also the Ottoman courtyards where fountains were used as sound blockages for secret sayings to stay unheard and diplomacy to flourish. A fountain in the Middle Eastern desert is rarely one of water; most common liquid flows are of oil. The mirror can be seen as a symbol for the new shiny world of Dubai, the way the western world loves to hate it and the spectacle that we are all while surrounding it looking at ourselves through its existence.