A social art project brought to the UK by the Latvian artists group Primitive and art bureau OPEN, who brought together a team of print-designers, photographers and video/new media artists to promote the symbolic values of the tea-mushroom through the use of controversial branding tools: a new, youth orientated brand-name: T-Shroom; eye-catching packaging; TV spots and print ads with anti-consumerism messages. 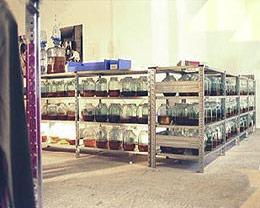 T-Shroom is a social art project brought to the UK by the Latvian artists group Primitive and art bureau OPEN, who brought together a team of print-designers, photographers and video / new media artists to promote the symbolic values of the tea-mushroom through the use of controversial branding tools: a new, youth orientated brand-name: T-Shroom; eye-catching packaging; TV spots and print ads with anti-consumerism messages.

T-sroom 2002 will feature elements of the fake shop first installed during Christmas 2000 in a main shopping area of Riga: the video documentary work "Association of the Tea Mushroom Growers" portraying families who still have the tea-mushroom in their kitchens; interviewing their youngsters who now prefer Coca-Cola; as well as showing real examples of this tiny biochemical factory and health promoting beverage.

Tea-mushroom or Kombocha - has been a popular home-made 'soft-drink' in the Baltic states and Russia for more than a century and usually had a pet like family-status. As it couldn't be bought in a shop, tea-mushroom became part of the family heritage or even a long-living family member and effectively was distributed through the human network.

Ten years after the breakdown of the Soviet Union, two Latvian new media artists Peteris Kimelis and Katrina Neiburga smuggled a couple of tea-mushrooms over the border to Stockholm and announced them as East European refugees, endangered in their homeland by the invasion of global soft-drink brands like Coca-Cola. Tea-mushroom has become an extinct minority in its field, symbolising the rapid spread of the world's globalisation process, as well as the increasing impact of chemical foodstuffs and industrial products in our everyday rituals.

Primitive was set up in 2000, by two artists Katrine Neiburga and Peteris Kimelis, as a reaction to and critique of consumer culture and the alienation it brings to the social realm. Previously they have worked with diverse forms of media art and their work has been widely shown in Latvia, Finland, Sweden, Holland and Germany.
Art Bureau OPEN [open.x-i.net] has been in existence since 1994 as a collective of artists, writers and curators. In the last eight years OPEN has provided a platform for many critical voices and realised numerous art intervention projects in public and media spaces. For example: Untitled: subvertising session in streets of Riga (http://open.x-i.net/subversija/) September 2001 - 500 billboards displayed the work of a local and international alliance of culture jammers and communication guerrillas; Animal Farm, May 2001 - a project produced in collaboration with the British Council; Slide show, 2000 - social commentary produced by 10 commissioned artists and screened on LNT television.

Kombucha is a combination of bacteria and yeasts living together symbiotically in a matrix of mycelium-like threads. The active substances address themselves to theentire body system. It can re-establish a normal condition in the cellular membranes without any side effects and thus promotes one's well being in a natural, non-toxic manner.

T-Shroom also will visit AVEDA institute in Holborn and Floating IP space in Manchester later this year. Project is being presented in association with Visiting Arts and AmbientTV.Net.

Fri-Sun 12-6pm or by appointment