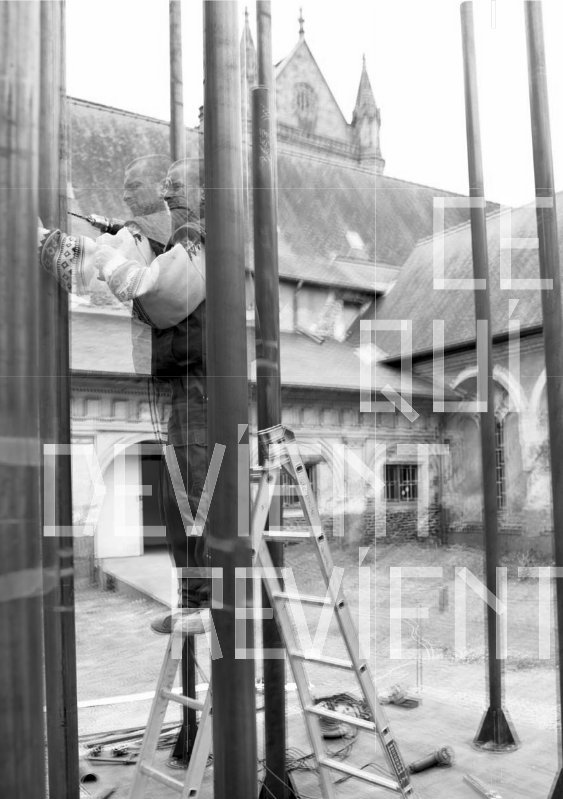 What Comes, the second edition of Les Ateliers de Rennes - Biennale d'Art Contemporain, will focus on the theme of the future and the thought surrounding it, based on a proposal by Raphaële Jeune. Operating on an international level, this event connects rigorous exploratory and analytical examination of crucial issues facing our societies and their economies, with the desire to bring together some of the most pertinent artistic approaches currently employed. Numerous artists, theoreticians and actors working in this domain will be invited to construct and animate this platform of creation and reflection, whose aim is to bring to light the forms, processes and contradictions of our relationship with tomorrow.

All systems, all communities, all individuals interact with the future, just as they do with time that “they start lacking”, which confronts them with the fact that they hold the ability to act, but they don’t entirely know what the reality will be, for it is not yet here. Between what comes to us, whose contours we imagine and plan out by various means, and what comes from us, being our decisions and our actions, there exists a complex space of anticipation, strategy, invention and expectation, nourished by our imagination, our desires and our fears. An indissoluble link between past, present and future constitutes the vector of the course of our existence and, faced by what comes, we oscillate between helplessness – because of the inadequacy or absence of our responses –and forcefulness– because of the freedom that the not‐yet‐happened leaves open to us.
The thought of What Comes has always tended to make what happens to us now, tomorrow and after tomorrow, not appear to be of a disastrous nature, but something better. Strategies of manipulations – predictions, superstitions, self‐fulfilling prophecies or simple fashion trends – have, they too, always participated in the construction of the future at the service of various powers that be. The central question therefore remains that of the defining conditions of this better, and the possibilities of emancipation from all attempts to alienate our free will when confronted by this notion.

THE SENSE OF POSSIBILITY AND THE FUTURE: FREEDOM OF BECOMING

Art constitutes the site of the emergence of possibilities and, in this, it remains on the alert to what is. The alternative regime that it opens up invites us to shake up established certitudes and patterns, and to affront the immanent freedom of all future and becoming. Setting out from this premise, this event intends to bring together works and artistic approaches that place this dynamic within the perspective of the future. Works that question both the forms that we give to the latter and the tools we forge for thought –experimentation, prospectives, speculation, planning, scenario, utopia, fiction– and the decision‐making processes that respond to them –strategy, innovation, revolution, etc. This while considering more precisely the economic realities of our time, which prefigure those yet to come and should be linked to the ecological, social and human aspects of our existence.

ART AND ECONOMY FACED BY WHAT COMES

How, in a world dominated by an economic system, do desires for the future take shape? Who oversees the interpretation of the present and the prefiguration of a desirable future? What are the means employed by economic agents in order to achieve this? How do we envisage notions of progress and growth today?
What are the ins and outs of innovation? Where do spaces of freedom fit when faced by what is yet to come? Is art one of these spaces?
These questions are so many possible directions that artists borrow, through the notions of utopia, scenario, project, rough draft and fiction, and even science fiction. Some are directly interested in the grammar of the future employed in the economic
sector (strategy, the definition of trends, speculative scenarios), others seize hold of more generic forms of connection with what is to come (decision, revolution, etc).
The systemic crisis that the world goes through make this issue even more pressing, and on a basis of incertitude when faced by the evolution of the planet’s fundamental equilibrium, artists, theoreticians and economic agents each have their place in defining new paradigms. What Comes wishes to be, above all else, a space of artistic creation, but also of reflection and words… a fundamentally political space, which calls upon these different identities to make palpable, by confronting different points of view, the profound and multiple dimension of our relationship with tomorrow.

In order to enrich the event with a geographical dimension, What Comes will be the opportunity to collaborate with other international events occurring simultaneously. Thinking about the future reflects the vision that a society has of itself in a given historical and geographical context. Dealing with this issue in different zones around the world is essential if we are to take into account the diversity of concepts with regard to our relationship with tomorrow. The African Biennale Dak’Art and Bucharest Biennale BB4 are partners, in the form of artistic and intellectual exchanges, and in terms of raising profiles.

Les Ateliers de Rennes
Founded and directed by Bruno Caron, the Norac group in 2005 implemented a policy of patronage in contemporary art. Art Norac a non profit making association of the "loi 1901" was set up to execute a series of sponorship events.