Samarasâ€™ large-scale photographic prints draw their title from the pairing of Walter Benjaminâ€™s concept of the angel of history and the military terminology for artificial timelines created post-mortem on disasters of war, defeats in battle, and failures of strategy and intelligence. These images act as signposts revealing the intermixing of surveillance, military and entertainment technologies on the contemporary landscape. 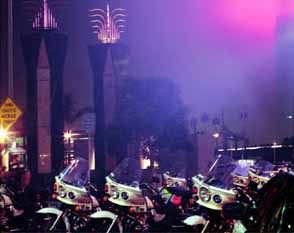 This summer the Walter and McBean Galleries exhibits a group of photographs by Los Angeles based artist Connie Samaras, the 2002 recipient of the prestigious Adaline Kent Award. The Walter and McBean Galleries at the San Francisco Art Institute will feature the artistâ€™s most recent body of work â€œAngelic States - Event Sequence,â€ the first installation of this body of work as a series. The exhibition will be on view June 20 - July 27, 2002, with a reception and preview on June 19, 5:30 - 7:30 pm.

Samarasâ€™ large-scale photographic prints draw their title from the pairing of Walter Benjaminâ€™s concept of the angel of history and the military terminology for artificial timelines created post-mortem on disasters of war, defeats in battle, and failures of strategy and intelligence. These images act as signposts revealing the intermixing of surveillance, military and entertainment technologies on the contemporary landscape. Walter Benjaminâ€™s â€œangel of historyâ€ can be visualized as a monolithic figure standing with her wings spread, facing the past, while being propelled towards the future by the mounting pile of wreckage at her feet. Samaras, like Benjaminâ€™s angel of history, stands with her back to the future, culling photographically from the debris of the past before her and nudging us as viewers to look more closely.

Referring to herself as a â€œspeculative science fiction artist,â€ Connie Samaras traverses everyday landscapes, in this case Los Angeles, Las Vegas, and New York, to document the hybridization and overlay of fiction and reality, and of the public and the private. Pointedly creating straight photographs that pose as digital manipulation, she has invigorated the benign genre of landscape photography â€“ capitalizing on our visual savvy while simultaneously working on cracking this seamless marriage of disparate arenas.

â€œPeople are more likely to search for social truths,â€ Samaras observes, â€œif they are presented as fiction.â€ â€œMore recently,â€ she adds, â€œI've become interested in how these seemingly digitally manipulated photographs mark the ways in which new technologies are visually transcending the â€˜boxâ€™ of cyberspace and emerging into quotidian landscapes.â€

Often assuming an alternate identity to stealthily gain access to what is off limits, or forbidden to be photographed, Samaras reveals to us what we cannot see, or in some cases what goes unnoticed. Capturing these images and presenting them at large scale, the artist requires viewers to pause and scrutinize what stands before them, and perhaps even contemplate the sequence that has brought us to this point.

Connie Samaras is an artist and writer based in Los Angeles. She has exhibited and lectured on her work extensively at numerous institutions including: New Langton Arts, San Francisco; the ICA London, England; Betty Rhymer Gallery, School of the Art Institute of Chicago; Los Angeles Contemporary Exhibitions (LACE); Walter Phillips Gallery, Banff Centre for the Arts, Alberta, Canada; Centre for Contemporary Photography, Melbourne Australia; Sydney College of Arts, Australia; Kunst House, Chongiu City, South Korea; Postmasters Gallery, NY; the Berkeley Museum, Oakland CA; Detroit Institute of Arts; Palace Gallery, Queensland University of Technology, Australia; Baguio City International Arts Festival, the Philippines; Medcad, Barcelona Spain. She has also presented and published numerous papers on a variety of cultural issues including feminist critiques of censorship of the arts (NY Law School Law Review; Artforum), considerations of new Pacific Rim economies and the transcultural flow of ideas (Australian Monthly), and an analysis of UFO culture as it relates to US cultural anxieties in the late 20th century (â€œIs it Tomorrow or Just the End of Time?â€ in Processed Lives: Gender and Technology in Everyday Life, Jennifer Terry and M. Calvert, eds, Routledge). She also has co-authored, with Victoria Vesna, the book and online project Terminals dealing with technology and the cultural production of death: http://time.arts.ucla.edu/terminals/. Samaras is a Professor in the Department of Studio Art and an affiliated faculty member in the Womenâ€™s Studies Program at the University of California, Irvine. She can be reached at samaras@earthlink.net or cjsamara@uci.edu.