From Tuesday until Sunday 11-21

Residues of general economy features the works and projects of more than 20 artists (like Santiago Sierra, Jake & Dinos Chapman, Alfredo Jaar, Francis Alys) who, in their precise, diverse and tentative ways, engage in a poetic investigation of economies founded on heterogeneity - the heterogeneity of economic exchanges and of productive processes, underpinned by the logics of loss, expenditure and squandering. 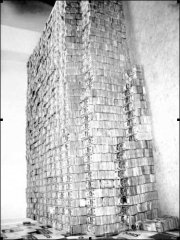 Borrowing a figure from "The Eighteenth Brumaire of Louis Bonaparte" by Karl Marx (1852) which invokes the ghostly aspect of the revolution that still prevails in the grey era of hegemonic terror, El Espectro Rojo examines the intersections where contemporary aesthetics and politics transcend the framework of cultural complacency and the liberal dogmas of today, and in doing so contribute to the formation of a new radical culture.

For their first exhibition and the first issue of their newspaper, produced by the CA2M, El Espectro Rojo uses various examples of theoretical-aesthetic interventions to question the framework of ordinary economic reflection, which has once again been accepted as "common sense" in the dominant school of thought.

Recovering the ambivalence and complexity of the fetish category as the focal point of critical theorisation in the consumer society, and as a key concept of the relationship between enlightened thinking and colonialism, Fetiches críticos: Residuos de la economía general features the works and projects of more than 20 artists who, in their precise, diverse and tentative ways, engage in a poetic investigation of economies founded on heterogeneity – the heterogeneity of economic exchanges and of productive processes, underpinned by the logics of loss, expenditure and squandering. These works, which appeal to an apparent economic "irrationality", all revolve around interrogating the relationships between desire and production and calling the accepted notions of "development", "underdevelopment" and "efficiency" into question. In clear opposition to the melancholic nature of contemporary reflection, Fetiches críticos sets out to show how a variety of recent artistic interventions have invoked a constant political and aesthetic transgression, in which the fetish notion manipulates and distorts the fictions of usefulness, equivalent exchange and investment rationality. All the interventions and works assembled for the Fetiches críticos exhibition explore the complex and multi-faceted capitalist system, in the north as well as the south, as an economic system with fissures and paradoxes which art exploits in a poetic quest for forms of practical and intellectual dissent.

Largely inspired by George Bataille's intuition of a "general economy" – a term first coined in "The Notion of Expenditure" (1933) and further developed in The Accursed Share (1950) – and by reflections on the fetish notion by authors such as William Pietz and Marx himself, Fetiches críticos aims to transcend the miserabilist description of the effects of the crisis of capitalism and demonstrate how art documents moments of anti-production, defuses the myths of development and launches the artwork as an object of desire and subversion. In this respect, the show takes a stand against the identification of dematerialisation and de-fetishisation as dominant critical practice, calling instead for a reinstatement of the power of contagion and dissemination of the fetish object of contemporary art. The exhibition therefore offers a constellation of art objects that displace and dethrone reason and calculation as the dominant forces in economic thinking, in the hope of generating a brand-new political experience.

In the spring of 2010 the CA2M will present a new selection of its works as part of a programme of temporary exhibitions to show the public the contents of the Contemporary Art Collection owned by the Regional Government of Madrid. There are currently over 1,500 pieces in the collection.