Five video works by Saskia Olde Wolbers, these aesthetically remarkable experimental films all follow the same basic pattern: a voice off narrates a story that is visualised in fictitious and predominantly organically formed spaces. On show also 30 works by Andreas Slominski from the past 15 years. His oeuvre is characterised by a conceptual approach and includes pictures, sculptures and performantive works, many of which reference everyday objects and place them in new contexts. 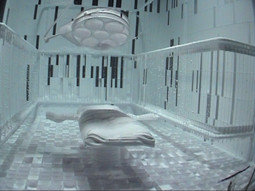 Five video works by artist Saskia Olde Wolbers from the Goetz Collection will be presented in a complex projection arrangement. These aesthetically remarkable experimental films all follow the same basic pattern: a voice off narrates a story that is visualised in fictitious and predominantly organically formed, self-contained spaces. The scenes are atmospherically underpinned by psychedelic and natural sounds that echo the biomorphic forms. Slow camera movements draw the viewer into surreal worlds, mostly portrayed in monochrome, whereby word and image do not necessarily correspond.

Olde Wolbers is inspired by reports of people with extraordinary life stories, which she expands and alters, for she works on the borderline between reality and imagination. In Placebo (2002), for instance, she shows the story of a man who tricked people for years into believing he was a doctor. His story is told as a monologue from the point of view of his lover who appears to be in a hospital ward beside him following a car accident. Although they are two separate and distinct works, there is a clear connection here with Interloper (2003), which tells this complex love story from the point of view of the man.

Another work centred on constructed identities and the quest for truth is Trailer (2005) in which the narrator goes in search of his biological parents. In a film trailer, he notices some jungle plants that bear his name, and that of his parents. Through this, he discovers that he is the child of two Hollywood actors who died in the South American rainforest.

In Kilowatt Dynasty (2000) the unborn child tells the love story of its Chinese parents -- a TV host and an environmental activist. The underwater scene is set in a television station flooded in 2016 during the creation of the vast Three Gorges Dam project. The narrative takes place in the future and addresses the phenomenon of the inverted dream syndrom in which sleeping and waking states become confused. Another inversion, this time of emotions, is the subject of Day-Glo (1999) in which a Spaniard, Luis, describes in a letter, read out loud, how his affection for his wife Carmen has dwindled because she has distanced herself from him emotionally over the years.

In a process that can sometimes take years, the artist constructs the miniature sets for her fantasy world in painstaking detail. She films without a script, often submerging the film set in a tank filled with water.

Saskia Olde Wolbers was born in the Netherlands in 1971. She lives and works in London, where she graduated in 1996 from the Chelsea College of Art & Design. Since then, her work has regularly been shown in solo and group exhibitions at renowned museums and galleries throughout the world.

In this major solo exhibition, the Goetz Collection presents about 30 works by Andreas Slominski from the past 15 years. His oeuvre is characterised by a conceptual approach and includes pictures, sculptures and performantive works, many of which reference everyday objects and place them in new contexts.

Slominski came to international attention with the Traps that have been a mainstay of his work since the mid-1980s. The exhibition begins with his Rattenfalle (1998), Trap for Birds of Prey (1999) and Vogelfalle (2000). Both as a mechanical object and as a metaphor, the trap functions through enticement: the bait prompts a temporary abandonment of caution. Then, the trap snaps shut, causing a sudden physical, emotional or intellectual encounter. Contact with the trap generates a highly charged moment of human emotions. It embodies power, deception and violence as well as slyness and deceit.

Slominski‘s art is beguiling. It lures the viewer with the bait of habitual perception. It dazzles us and forces us to look at things more closely. The artist plays with insinuations, meanings and preconceived connotations, often leaving the viewer with a sense of having been „caught out“ and sometimes even feeling like a „victim“.

Another important aspect of Slominski’s work involves windmills of various kinds. Four of these can be seen in the exhibition. Slominski is particularly interested in the function of the windmill as a means of communication: for centuries, messages were relayed over long distances by positioning the blades of the mill in various ways. Today, windmills tend to have romantically nostalgic connotations and are often found in miniature form as decorative garden ornaments.

The Goetz Collection also presents a series of recent large-format pictures in which Slominski combines painting and sculpture: spray-painted works incorporating diverse hand-crafted objects of various manmade materials.
One example of this new body of work is Africa (2009) – a garage door. Slominski hangs doors on the wall as though they were panel paintings; the metal surface becomes a picture plane featuring multicoloured plaques.

Andreas Slominski was born in Meppen, Lower Saxony, in 1959 and now lives and works near Berlin. He studied art at the Hochschule für bildende Künste in Hamburg from 1983 to 1986. Since the early 1990s, he has had a number of major solo exhibitions at prestigious galleries and museums, including Hamburger Kunsthalle (1995 and 1997), Deutsche Guggenheim, Berlin (1999), and Fondazione Prada in Milan (2003). In 2006/07 Museum für Moderne Kunst in Frankfurt held a major retrospective exhibition in his honour.

A catalogue will be published with essays by Ingvild Goetz, Karsten Löckemann, Birgit Sonna, Stephan Urbaschek and Katharina Vossenkuhl (German/English).