The exhibition 'Human Condition. Empathy and Emancipation in Precarious Times' offers a journey into human ethics where the structures of address, responsibility and moral agency are at stake. The artists invited to this exhibition map the critical space of the human condition, concentrating in particular on Hannah Arendt's action, one of the fundamental human activities that, together with labor and work, compose vita activa and correspond to the basic conditions under which, according to Arendt, life on earth has been given to man. Curated by Adam Budak. 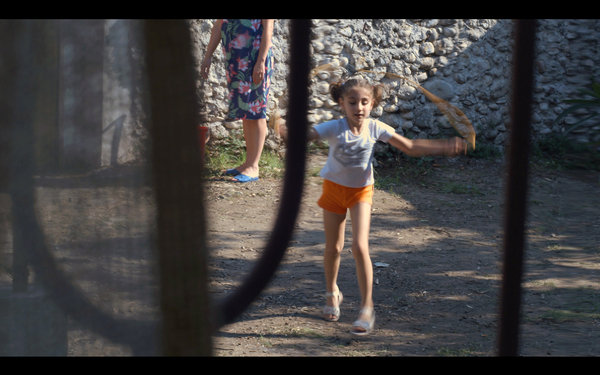 We are waiting. We are pending, in anticipation. A political pamphlet, "The Coming Insurrection," authored by an anonymous collective, the Invisible Committee states harshly: "Everyone agrees. It's about to explode." We keep on waiting although, as they claim, "it's useless to wait – for a breakthrough, for the revolution, the nuclear apocalypse or a social movement. To go on waiting is madness. The catastrophe is not coming, it is there. We are already situated within the collapse of civilization. It is within this reality that we must choose sides." The rhetoric of crisis and the rhetoric of power overlap; the sharing of sensibility and the elaboration of sharing is an urge: the uncovering of what is common and the building of a force. Empathy acts as a measure of the intensity of sharing. Still another question is being articulated, as odd as obvious and vulnerable: "How do we find each other?" In the heart of the riots in Greece and France, a call for insurrection is uttered.

The exhibition Human Condition. Empathy and Emancipation in Precarious Times offers a journey into human ethics where the structures of address, responsibility and moral agency are at stake. "Who are we?" asks Hannah Arendt in her Human Condition where the actualization of "who" refers to processes of thinking, willing and judging. "What are we made of?" asks Jeremy Rifkin while introducing Homo empathicus, the main protagonist of his "new view of human nature." "What counts as human? What allows us to encounter one another?" investigates Judith Butler, concluding her essays on contemporary violence, grief and mourning. This exhibition is the portrait of a precarious world of instability and an uncertain future, where social vulnerability is challenged and the frailty of human affairs is exposed.

What is the relationship between emancipation and empathy? How do they shape the human condition? Between emancipation and despair, self-empowerment and a rapidly growing rupture of social Gestalt, between communal desire and individualistic mentality, this exhibition collects models of contemporary realities and sites of conflict. Faced by the unpredictability of the future and confronted by the suspension of previously available patterns, it asks for a chance of hope and searches for possibilities of the heroic in an age of corrupted values devoid of historical reference. "How does the world come together? How does a world fall apart?" thus Brian Holmes rephrases the essential "to be or not to be?" of our times and indicates the pathways for grassroots intellectual action in the contemporary world-system as processes of "locating yourself against the horizon of disaster, then finding the modes and scales of concrete intervention into lived experience." According to a social theorist, "we are at the threshold of social change, brought on by a failed economic model, which has also led to melting icecaps and blazing war."

The artists invited to this exhibition map the critical space of the human condition, concentrating in particular on Hannah Arendt's action, one of the fundamental human activities that, together with labor and work, compose vita activa and correspond to the basic conditions under which, according to Arendt, life on earth has been given to man. Action, as Arendt indicates, "is the only activity that goes on directly between men without the intermediary of things or matter and as such, it corresponds to the human condition of plurality, to the fact that men, not Man, live on earth and inhabit the world."

Breakfast with Hannah Arendt
Lecture by Sophie Loidolt before the opening
Empathy and Emancipation in Precarious Times: The understanding heart and expanded judgment
June 12, 10am, Space04

Is there a connection between empathy and emancipation? Or, putting it another way, can our power of empathy help us in the process of social and political self-liberation? What does emancipation mean in fact in a world dominated by systematic injustices? And hasn't the exalted idea of the Enlightenment given way to general emancipation fatigue and consumption-oriented indifference in our own privileged place in the world? It is worth rethinking and reconsidering these concepts.

As her "human condition" furnished us with one of the basic thematic inspirations for this exhibition, Hannah Arendt can give us food for thought here as well. And as always, she thinks against the grain...

Sophie Loidolt is an assistant lecturer at the University of Vienna's Institute of Philosophy.

A film screening dedicated to the masters of ethnographic cinema, anthropologist Jean Rouch (1917-2004) among others. Combining fiction and non-fiction techniques and often integrating a sort of documentary surrealism, Rouch's practices blur the traditional distinctions between subject and observer as well as those between fiction and documentary film. His controversial Les Maîtres fous (1956, 28 min) investigates the ceremony of a religious sect, the Hauka. This milestone in cultural anthropology shows how a possession ritual helps people to deal with the shock of colonialism in Ghana.

The film evening is concluded by Las Hurdes (1933, 30 min), the only documentary by legendary Surrealist filmmaker, Luis Buñuel. This captivating study of Las Hurdes, an isolated and impoverished Spanish community, where houses have no windows and most of the inhabitants have never eaten bread, is Buñuel's reexamination of his fascination with human cruelty.