'Journey in my head. The ethnic headdresses Collection of Antoine de Galbert' comprises more than 400 headdresses and other head ornaments. All these objects, which serve a ritual, social or practical function, are from non-western peoples and ethnic groups. Peter Buggenhout transforms discarded material, reclaimed objects and organic residues into sculptures; an important group of works gives insight into the artist's singular world. Jean de Maximy's ink drawing, which he began in 1968, extends over hundreds of 50 x 60cm sheets; geometric figures move through a romantic landscape towards a distant horizon. Known for his in situ works in urban and natural settings, Christophe Gonnet takes over the patio transforming it into a vast wooden structure. 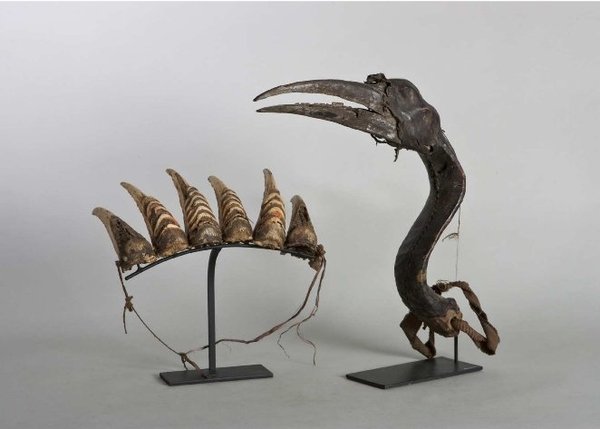 Journey in my head. The ethnic headdresses
Collection of Antoine de Galbert

Journey in my head, the ethnic headdresses collection of Antoine de Galbert

From June 12 to September 26 2010, la maison rouge presents the first showing of a major yet little-known aspect of Antoine de Galbert's collection. This collection of indigenous headdresses, which he began some fifteen years ago, comprises more than 400 headdresses and other head ornaments. All these objects, which serve a ritual, social or practical function, are from non-western peoples and ethnic groups. This is an impassioned collector's journey without end through the forms, colours and materials in which humankind cloaks itself.

To be naked is to be without a voice
(Dogon proverb)

This exhibition is no more about ethnology than it is about contemporary art or fashion. Rather it is an immobile journey around the world, through some 250 headdresses from the collection of Antoine de Galbert. It is a poetic incursion into a realm of shapes, materials and colours; an inventory of all that is possible in customs and rituals.
It leaves aside the usual geographical and chronological divisions to propose a global and thematic view. As the collector likes to remind us, all over the world people cover their head for protection or for show. The headdresses in Antoine de Galbert's collection are far more than mere adornments or frivolous accessories. They are ideograms to be deciphered; badges of rank and status; expressions of a man's or woman's place in the world.

On a purely ethnological level, the exhibition sheds light on the symbolism and function of these ornaments (power and divinity, hunting and war, rites of passage and seduction). It is also a sensorial experience of the different materials used (horn, scales, feathers, beads, fur, buttons, hair, monkey skulls, insects, etc.) and an aesthetic discovery that breaks with visitors' visual expectations (Africa meets the Pacific, Central Asia meets Siberia). A Paraguayan headdress, covered in crocodile scales, will be shown next to another made from a pangolin shell from the Democratic Republic of Congo (Benge). A Naga warrior's headdress (from the far reaches of India and Burma), embellished with wild boar tusks and crowned with a monkey skull, will converse with similar animal trophies, this time on African and Filipino headdresses. Certain sequences at points throughout the exhibition will be purely visual, such as a series of Amazonian feathered headdresses, a group of African beaded bonnets, or headdresses whose common denominator is to be made from hair, or to suggest its texture.

The exhibition ends with a group of pieces - all exceptionally on loan from the different departments of the Musée du Quai Branly - in an evocation of the collector's desire to own this or that object whose rarity or historical value place them for ever out of reach.

nature's headdress: the fine distinction between hair and headdress, between natural and artificial.

animal magic: how humans have sought to take on the attributes of the animal that is represented as fragments (hair, claws, horns, beaks, scales, fur, etc.)

the sacred realm: headdresses worn by priests, officiants and shamans.

headgear and hierarchy: hats, turbans and crowns as instruments of prestige and social domination.

on parade: hunters, warriors and symbols of virility.

feathered man: a "lighter than air" look at feathers and their powerful shamanic implications.

feminine seduction: bridal headdresses; the dialectics of the veiled and the unveiled.

the art of pretence: theatrical headgear.

Scenography
Most ethnographic exhibitions approach their subject continent by continent, with objects shut away in glass cases. The headdresses shown at la maison rouge will be displayed on vast metal tables, with no barrier between them and the visitor. A label will present the "identity" of each one (geographic provenance, the culture that produced it, materials, date where possible, pedigree).
A frieze of archive photos along the walls will instil a human presence, and illustrate how these headdresses were or are worn.
Selected works of contemporary art will form elective affinities with the headdresses, illustrating the consistency with which Antoine de Galbert chooses works for his collection.

catalogue
Published by Fage Éditions, the catalogue will include an interview in which Antoine de Galbert explains these headdresses' place in his collection, an introductory essay by Gérard Wajcman on the art of adornment from a psychoanalytical angle, an essay by Bérénice Geoffroy-Schneiter on the symbolic and ritual use of these headdresses, interviews with couturiers and designers whose work is inspired by or draws on this type of adornment, and a detailed description of each of the objects presented in the exhibition.

After the first showing in Paris of a work by Peter Buggenhout (b. 1963 in Belgium) for the Mutatis Mutandis exhibition in 2007, la maison rouge now presents the artist's first solo show in France.

Peter Buggenhout transforms discarded material, reclaimed objects and organic residues into sculptures.
Both repelling and compelling, these autonomous, solitary, indefinable shapes are as much miniature universes as they are parts of a fantasy macrocosm. They are the "archaeological finds of the future."

An important group of works gives insight into the artist's singular world. Amorphous and escaping classification, three categories of sculpture are represented: those covered in dust (The Blind Leading the Blind) with four large works, an astonishing in situ installation of dust in a 120 sq m/ 1,300 sq ft room, and works impregnated with animal blood (Gorgo) or made from entrails.

When Jean de Maximy (b. 1931) exhibited at the Musée d’Art Moderne de la Ville de Paris in 1971, he was far from imagining that the work he showed would not be finished for another 40 years. This ink drawing, which he began in 1968, extends over hundreds of 50 x 60cm sheets. Geometric figures move through a romantic landscape towards a distant horizon. Elsewhere they appear in an enclosed, labyrinthine space that is redolent of Piranesi's prisons. The frieze that will run for some sixty metres through the gallery spaces around the patio will plunge visitors into a mysterious world of constant metamorphosis.

Known for his in situ works in urban and natural settings, Christophe Gonnet (b. 1967) takes over the patio at la maison rouge, transforming it into a vast wooden structure that will slowly become overgrown by vegetation. This construction comprises a floor from which a series of vertical elements rise towards beams.
It will be the substrate for a developing environment where visitors can wander or take root.

Christophe Gonnet sets out to take full possession of the patio and transform its spatiality, how the public apprehend it, and certain architectural features, in particular how it relates to the exhibition spaces.

The project is at once sculptural, architectural and also environmental in its relation with the garden. "I want to focus on two aspects of this work and the public. One concerns tension, pressure, what is an enclosed yet at the same time outside space and the multiple points of view created as people move around the exhibition spaces. The other concerns the sensation of being enveloped, isolated, of taking refuge inside the patio by multiplying the number of possible routes and by creating nooks for sitting or eating in." (Christophe Gonnet).

Plants are central to this project. Each of the vertical elements will host a plant on a hidden support. Leaves will slowly spread across the walls.
"Each element, through its material and form, can suggest a tree, a tree trunk, and indirectly become a metaphor for the forest. If the plants grow well, we can hope to see quite a spectacular development as the patio is transformed from a mainly architecturally structured space into a highly 'vegetalised' one."
(Christophe Gonnet).