Ernesto Neto: The Edges of the World. Best known for his sensuous sculptures, Neto creates site-specific installations with an abstract, biomorphic quality - evocative of skin and interior body systems - that investigate the way in which special alterations transform the relationships between people. The New Decor: Artists & Interiors presents an international survey of over 30 contemporary artists who explore interior design as a means of engaging with changes in contemporary culture. The exhibitions are highlights of Festival Brazil. 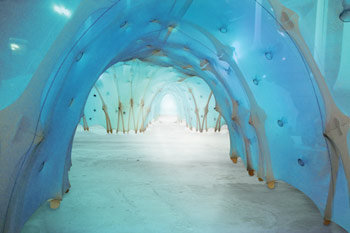 Ernesto Neto: The Edges of the World
curated by Cliff Lauson

Dramatic, immersive installations by internationally renowned artist Ernesto Neto transform the Hayward Gallery's upper galleries and its three outdoor sculpture courts. Best known for his sensuous sculptures, Neto creates site-specific installations with an abstract, biomorphic quality – evocative of skin and interior body systems – that investigate the way in which special alterations transform the relationships between people. In this, the artist's most ambitious exhibition to date, visitors experience a sequence of interlinked spaces that skilfully merge sculpture and architecture.

Wander through fabric installations, relax in cushioned soft spaces, ascend stairs into artworks overhead and, following on from Neto's signature 'nave' works, venture barefoot through an all-encompassing nylon vessel. Exploring new directions in his practice, Neto also presents his first outdoor installations at the gallery's sculpture courts. Whether submerged in a sculptural pool or balancing on a undulating path, visitors find themselves become active participants in the artworks.

Artist talk: Ernesto Neto
Friday 18 June, 7pm
Ernesto Neto discusses his practice and his recent work with the curator of his exhibition at the Hayward Gallery, Cliff Lauson.

Brazil Report: Art and Politics
Monday 28 June, 7pm
A talk on the work of Ernesto Neto and contemporary art in Brazil in relation to the conceptual framework of the upcoming São Paulo Biennial which this year elaborates on the theme of 'Art and Politics'. Presented by Moacir dos Anjos, researcher at Fundação Joaquim Nabuco in Recife and Chief-curator of the 29th edition of the São Paulo Biennial (September 2010).

An international survey of over 30 contemporary artists, including some of the leading sculptors of our time, who explore interior design as a means of engaging with changes in contemporary culture. By reconfiguring and reinventing the familiar objects of our domestic life, these artists look beyond design and function to create provocative sculptures and installations.

Curated by Ralph Rugoff, Director of the Hayward Gallery, the exhibition draws on artists from around the world, but what unites them is their ability to transform objects we associate with the everyday – a bed, a shelf, a lamp – into something uncanny and compelling.

Ernesto Neto: The Edges of the World and The New Décor are highlights of Festival Brazil, a major summer festival of music, visual arts, dance literature, debates and free performances, across the Royal Festival Hall, Queen Elizabeth Hall, Hayward Gallery, E4 Udderbelly and on the riverfront, celebrating the dynamic culture of today's Brazil, from 19 June to 5 September 2010, presented by Southbank Centre and sponsored by HSBC.

Festival Brazil provides the opportunity to engage with Brazil’s vibrant cultural scene. It showcases internationally renowned Brazilian artists and performers and introduces a new wave of young talent. Over the summer the Southbank Centre site will be transformed to create places for performance and activities, conveying a celebratory atmosphere, and paying tribute to the vibrant
graphic and graffiti art so central to the urban landscape of Brazil.

Highlights of the programme announced today include:

Brazilian superstar musician, Gilberto Gil, performing at the Queen Elizabeth Hall. Gil, a founding member of Tropicália, a brief explosion of musical, cultural and political activity in 1960s Brazil, is the former Brazilian Minister for Culture.

One of Brazil’s great voices, Maria Bethânia, the ‘Soul of Brazil’, in a rare UK performance.

Renowned designers, The Campana Brothers, famed for their vibrant furniture inspired by Brazilian street culture, to create a spectacular pop-up venue built from raffia, and assembled onsite at Southbank Centre by members of the local community.

Inspirational Brazilian cultural group AfroReggae bring their joyous musical mix of Brazilian drums fused with dance and reggae, straight from the favelas of Rio de Janeiro. They will take over the site with performances, drumming workshops and outdoor showcases.

Os Mutantes and Tom Zé, pioneers of Tropicália and influential musicians, to perform a special double bill at the Royal Festival Hall.

From the favelas of Salvador, the world masters of capoeira leap, flip, kick and spin at breathtaking speed in Brazil! Brazil! a new show for all ages, headlining the E4 Udderbelly at Southbank Centre.

Throughout August, BFI Southbank will be presenting a survey of recent South American cinema, which coincides with Festival Brazil. The season features movie landmarks from the last 12 years, including Walter Salles' award-winning Central Station (1998), which kick-started a revival of fortunes in film-making in Brazil and throughout South America.

Friday 18 June 2010, 5:30pm
Ernesto Neto discusses his practice and his recent work with the curator of his solo exhibition at the Hayward Gallery, Dr Cliff Lauson.