Takashi Horisaki's site-specific project explores the abandoned housing situation in Buffalo, using elements from these buildings to create a dome-like structure. Megan Michalak and Stephanie Rothenberg's 'World X Diagnostics' is a conceptual art project that invites the public to evaluate the functioning of civil institutions in their home country following the wake of the 2008 World Financial Crisis. James Paulsen's series of paintings titled 'Transformation of the Public Sphere' examines the issue of public surveillance as a form of political technology. 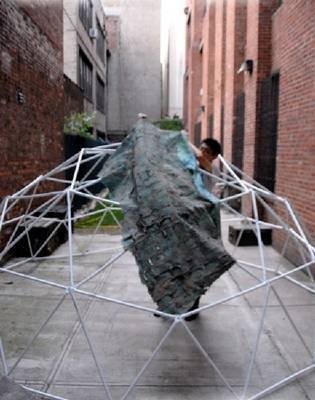 Takashi Horisaki
Social Dress Buffalo: The Past Reflecting the Future

International artist TAKASHI HORISAKI's site-specific project explores the abandoned housing situation in Buffalo, using elements from these buildings to create a dome-like structure meant to inspire further conversation about realistic and sustainable options for the hardest hit neighborhoods. During the early twentieth century, architects posited shapes such as the dome or sphere as the future of architecture; possessing unique iconic forms and the virtue of increased structural strength at a low material cost, these shapes became closely tied to utopian counterculture movements and futuristic model communities, drawing on concepts implicit within modernist design such as mass production, the dismissal of ornamentation, and a focus on functionality.

The dome is a symbol of the impulse to decrease construction costs, maximize use of space and materials, and conserve energy costs necessary to create a better housing infrastructure and a sustainable future. Constructed to the dimensions of an average adult using a metal conduit understructure, the artist's proposed dome (to be installed at the BAS gallery) will be covered with latex 'skins' of various shapes and colors cast from existing abandoned housing facades around Buffalo to create a hybrid futuristic-primitive structure which will serve as a meeting place for conversation and consideration.

While the exterior will look attractive by virtue of its colorful collage-like appearance, the interior will reveal the history of Buffalo's neighborhoods through the replicated surfaces of its homes. A major component of this work involves collaborating with local activist groups such as Buffalo ReUse and PUSH Buffalo to address the ideas behind the construction of this small-scale monument. Volunteer art and architecture students from several area high schools and universities will also assist Horisaki with casting the facades in liquid latex. In addition, youth drawing workshops will be conducted at nearby People's Park with students from the Gloria J. Parks Community Center and PS 45 International School. Inspired by simple solutions such as urban gardens and community-building activities, the project is intended to promote a sense of togetherness and similarity of purpose so as to foster empowerment among citizens and encourage creativity in response to the ongoing housing crisis.

A free public Meet&Greet with the artist, including a slide presentation and hands-on latex casting workshop, will take place at Buffalo ReUse on Friday, May 21, 2010 from 12-2 p.m. at 298 Northampton Street. PLEASE NOTE: Those with latex allergies are welcome to attend but are advised not to participate in the casting process, as pure liquid latex will be used.

MEGAN MICHALAK AND STEPHANIE ROTHENBERG's World X Diagnostics (2009) is a conceptual art project that invites the public to evaluate the functioning of civil institutions in their home country following the wake of the 2008 World Financial Crisis. Modeled after the European Values Survey, participant responses are entered into an interactive database that translates this data into sound produced by a responsive sound sculpture.

Just as the color-coded 'terror alert system' within the US is used to diagnose and alert the public to outside threats to 'national security,' this project appropriates this operative logic and applies it to threats of economic and social collapse caused by the corruption of the socio-political system from within. The project creates a social platform that allows public opinion to be diagnosed and broadcast into the public realm. Utilizing live audio/video feed, visitors attending the opening of the concurrent 2nd Moscow International Biennale will have the ability to input data in order to trigger sounds at Buffalo Arts Studio on July 3, 2010.

JAMES PAULSEN's series of paintings titled Transformation of the Public Sphere examines the issue of public surveillance as a form of political technology. In 2008, the City of Buffalo installed fifty-six wireless surveillance cameras on strategic street corners to monitor the public. These pole-cams offer a new vocabulary of power and coercion being disseminated from above. The public sphere is viewed by state power as a chaotic and untidy entity which must be controlled and manipulated. Paulsen's work marks the transformation of the public sphere from democratic space into a petri dish of experimentation. As the paintings are laid out, one follows three viewpoints offered: a straight-on view of the camera in the public space, a view of the camera body with a distorted reflection of the street/intersection on the surface of the glass sphere, and finally, just the distorted reflection of the public sphere itself, resembling a giant eye with dilated pupil. The implementation of this political technology signals a cynical lack of imagination among our leaders, adding to a continuing trend of dehumanization . . . the public further becomes an object of data, raw information inside a laboratory of power. Paulsen seeks to draw attention to these cameras, enabling greater discussion about this new presence.