Where Cuckoos Nest in Autumn 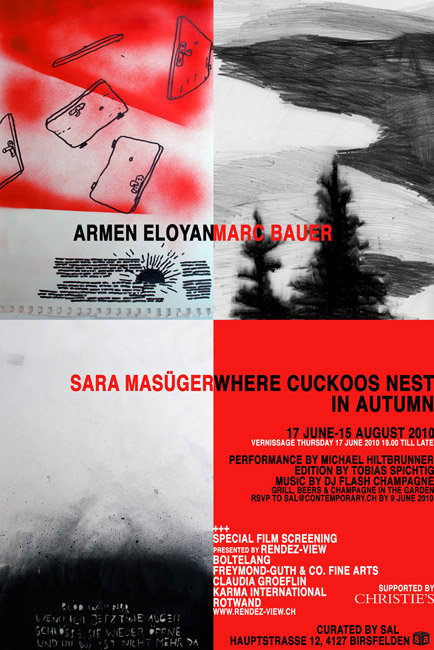 With Marc Bauer, (Swiss, b.1975), Armen Eloyan (Armenian, b.1966) and Sara Masüger (Swiss, b.1978). The three artists met and studied together at the Rijksakademie Van Beeldende Kunsten in Amsterdam between 2002 and 2004. At SAL Projects, they are exhibiting together for the first time. This exhibition draws a picture of unease, contemplation and fear, manifested in various subjects but all connected by the same sort of menacing, partly poetic use of the drawn line. Sara Masüger's large bronze cast chain, made initially by forming clay into irregularly shaped rings, hangs at three meters long from ceiling to floor, almost like an escape rope, very different from her barred windows that she cut into the gallery wall. Armen Eloyan’s cartoon characters, normally placed in an abnormal context, here in this six drawings sequence, Goofy is losing himself in a dreamscape turning into a nightmare. Marc Bauer’s mental state of being circles around ancient Norther European iconog raphy, a knight, sitting wounded on a battle horse, feeling his own death riding towards him. A drawing which Bauer printed out in large scale and glued against the tiles. Three crazies finding a place at a most unusual time or as the one likes to say, Where Cuckoos Nest in Autumn.

In his Komposition für Steel Drum (Composition for Steel Drum), premiered in Winterthur 2009, Michael Hiltbrunner works with the sound between the tone fields of the steel drum. The repetitiveness of the composition is suggestive and hypnotizing, and creates a sound reminding of percussions works in minimal (Steve Reich) and industrial music (Z’ev).

A new edition entitled Glassworks Reversed by Zurich based artist, Tobias Spichtig, will be presented and played during the evening. The infamous 1982 release, Glassworks by Phillip Glass, a subtle and most beautifully repetitive piece of modern classical music is recorded backwards, encased in a mirrored silk-screened LP-cover. Only when actively listened to it, will the audience hear the miscarriage of tone and rhythm. A subtle play and homage simultaneously. The evening is underlined with a special film Screening presented by Rendez-View with BolteLang, Freymond-Guth & Co. Fine Arts, Claudia Groeflin, Karma International and Rotwand.

This conglomerate of young Zurich galleries show projections and films by their roster of gallery artists, presented in two different garages.

The event is supported by Christie's