There is no hurry. With this affirmation, Mamco places it's fifth multi-annual cycle of exhibitions under the sign of a serene resistance to today's worries. First episode: Jokes 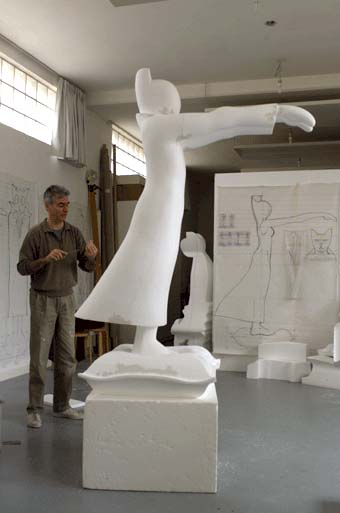 " Slow and Steady " - there is no hurry. With this affirmation, Mamco places it's fifth multi-annual cycle of exhibitions under the sign of a serene resistance to today's worries : the polluted atmosphere surrounding the rush to compulsory "growth", the shortening breath of authoritarian methods, be it in the sphere of today's well-bred art, or in the cynical arena of paleo-neo-managers. To the strangled frenzy of self-proclaimed states of urgency, to the puffy dullness of the righteous mind, Mamco reacts by taking that little "side step" that heralded the Year 01.( Why not take some time off to live, some time off to laugh or to smile ? Why not take a timely stroll to refresh one's look, a bracing sharpening of all the senses, including one's sense of critical judgment : so, do come along and immerse yourself in an art-bath marked by the sign of humour in the form of our big summer show, Jokes.

Sleep-Walking Cats, Wet Area, Mapico Dance, Burundun & Co
Hurried precision for hurried commentators : Mamco is not proposing a thematic show "about" humour in art, nor is it a globalized chore. But rather, more modestly, it offers a choice of materials that are all the more indicative of a marginal way of thinking whose terms and styles greatly differ from one artist to the other : the visitor is at liberty to let himself be more or less cheered by any one of the hundreds of works offered to his eyes. Jokes presents eight monographic exhibitions, accompanied by the works of ten other artists. As usual, the non-combatant's warpath starts on the fourth floor, entirely devoted to a French artist, Alain SÃ©chas. This maestro of humorous sketchings, who could have made a career at Charlie-Hebdo, is an all around artist who exhibits here the full extent of his talent : neon works, drawings, cartoons and, of course, those well known polystyrene sculptures in the form of cats, or Martians, that have made him popular over the past few years. In Trivial Pursuit, Alain SÃ©chas exhibits for the first time a feline and malicious Monument to Lacan with, in particular, a poetic and technically ambitious installation. Three large sleepwalking cats, clearly sexed, atop white cushions, will be moving along a rail in the midst of the public, as both exhibition objects and visitors of the exhibition, across seven showrooms, to the sound of dreamlike music.
On the third, second and first floors below, having just about recovered from his encounters with Alain SÃ©chas' mythical felidae, additional surprises will be awaiting our visitors. Such as The Great Burundun by Roberto Matta. The 91 year-old Chilean artist is the last living "historic" surrealist. A gigantic and impressive polyptyc, painted in 1974 in reference to the coming to power of general Pinochet the preceding year. A work expressing anger in the same vein as Matta's Guernica, but a Guernica treated in a burlesque fashion, at once oppressive and farcical.
Less "passÃ©" than those of various other protagonists of the surrealistic movement, probably because it stems from an aesthetic of the future underlined by science fiction, the works of Matta bear a significant influence on the post-war generations. Thus the American artist Peter Saul met Matta in Paris, and his twenty sweeping canvases shown by Mamco under the title Paintings have a surrealistic dimension due the way with which they denounce the American way of life.
Mamco also presents, under the title of Rangement, a quasi integral exhibition (over 120 pictures, paintings and sculptures) of the French artist Philippe Mayaux, who can be seen as an offspring of Magritte. His little pictures, attentive while deceptively naÃ¯ve, playing with both forms and ideas, compose a rich and typified opus. Mayaux : a universal artist relatively unknown to the Swiss public, that will be given an occasion to appreciate him to his true merit.
No less disconcerting is Bernhard Martin. This German artist presents at Mamco sixteen works, half of them being shown for the first time : Pictures for Gobelins, preparatory drawings for tapestries. The saucy title of his show, Ich zeig ihnen gerne meinen Nassbereich, (I will gladly show you my wet area... or my fresh paintings), is an invitation to discover engaging and paradoxical works, mixing smooth techniques and slimy stripes. Bernhard Martin is fond of large collages where all sorts of images collide, thus creating unexpected interrelations within logic that, here again, is surrealistic.
Following its fecund partnership with AndrÃ© Magnin and the C.A.A.C. Pigozzi Collection of African contemporary art, Mamco is pleased to present the extraordinary world of Tanzanian artist Georges Lilanga di Nyama, representing the Makonde culture, whose show Mapico Dance brings together a large choice of colorful paintings and sculptures, grotesquely dreamlike, fired up, boisterous, expressing a satirical opinion of society while bearing witness to an ancestral spirituality. Lilanga is one of today's African artists who, while part of well-established tradition, were able to develop a well-defined individuality and personality.
Influenced by American burlesque movies - the Buster Keaton, Harold Lloyd or Laurel and Hardy gags - Danish artist Peter Land portrays himself in his videos as an anti-hero who is forever crashing, a rotund Sisyphus whose ceaseless mishaps do not keep from going heroically forward again conquering the formidable molehills of one's existence. Our Ups and Downs exhibition presents four of his best videos, The Lake and The Ride among them.
Unfortunately, a recent illness has prevented the artist from completing an as yet unreleased work that Mamco looked forward to host. However, as "there is no hurry", there probably will have be another opportunity in future to present other works by Peter Land. The Scott David Shrigley, not unlike Alain SÃ©chas, is a virtuoso of humorous drawings. His stroke deliberately straightforward and spontaneous, his gags at once unleashed and out of step, have made him very popular across the Channel, where he has published a number of books. His Grip exhibition brings together a series of 180 of those small illustrations seemingly just flung around, whose humour clearly leans towards the absurd.

Art for all
In addition to these eight substantial monographies, Jokes presents the works of ten other artists : Ivan Fayard (France), John Fundi (Mozambique), Uwe Max Jensen (Denmark), SÃ©bastien Le Guen (France), Sherrie Levine (United States), Christian Lhopital (France), Elena Montesinos (Switzerland), Steven Parrino (United States), StÃ©phane Steiner (France), and Ernest T. (France).
Here again, contrasted approaches. The world of Walt Disney, mostly cartoons or comics, is dealt with in a subtle, sleek manner by Ivan Fayard, in a punky method by SÃ©bastien le Guen, and true to her appropriation logic by Sherrie Levine, who recreates Krazy Kat. John Fundi's sculptures are as grotesque and colorful as those of Lilanga. StÃ©phane Steiner makes one smile with a pretty series of sober drawings representing hairy objects, whereas Ernest T., with his "Peintures nulles", attempts to show that even abstract art can be farcical. Christian Lhopital's paintbrush brings to life beautiful macabre dances. Steven Parrino displays a strangled "Gag", playing on the double meaning of English, while Elena Montesinos shows on a quite large photograph another face of the jolly Mickey : a sordid Disneyian sweat shop factory in Asia. Finally, Uwe Max Jensen will welcome our visitors with a bowl full of pebbles: the most intrepid of them will be invited to put some in their shoes to visit the museum...
Jokes is but the first episode of a cycle which, in the Fall of 2002, will continue to put the emphasis on good-humoured criticism, scorn and self-derision. Mamco never privileged authoritarian, intimidating religious or para-religious forms of contemporary art. With Jokes, it hopes to show even more vigorously that the art of our time is not elitist. That it can address the largest audience showing what makes the happiness or the unhappiness of us all in everyday life.

Additional shows
Simultaneously to this wide exploration of some modes and tones of humour in art, Mamco presents three additional shows. First, JÃ©rÃ©mie Gindre (Geneva), a young artist recently exhibited at the Attitudes Gallery, proposes in A Millenary Tradition the cinematographic staging of a perfectly ordinary man's life. The Greek Vassili Balatsos realizes Independant Landscapes, monumental architectural frescoes with scotch tape as his support, inspired by small drawings one can find on cigarette packs in his country. Last but not least, the American Dan Walsh will be honoured with a show entitled Recycling, proposed by the Cabinet des Estampes, a section of the MusÃ©e d'art et d'Histoire of Geneva.

Press relations
Christian Bernard will introduce Jokes in the presence of several artists at a press conference to be held at Mamco on Tuesday, 21 May, at 11:00 am. Complete press files will be available. The official opening of Jokes will take place on Wednesday, 22 May from 6:00 to 9:00 pm.