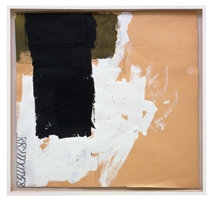 In the early 1950s, Richard Pousette-Dart (1916-1992) created a series of paintings nearly without paint, working in graphite and oil on canvas to produce works that are both complex and spare. Luminous and poetic, they are filled with symbolic imagery and natural forms, and they represent a dramatic departure from the artist's more characteristic, richly colored and thickly painted surfaces. Although Pousette-Dart began the white paintings when a shortage of funds prevented him from buying his usual supply of paints, he continued to make mostly white works at intervals in later years. "White," he said, "is something you endlessly return to."

Although the paintings read as white from a distance, they are filled with other colors. Pousette-Dart used a variety of white paints, primarily titanium and permalba, to give depth and complexity to his surfaces. He often painted over colored grounds, usually blues, ochers, or browns. In some cases, he re-used his heavily painted and brightly colored canvases, using their thick impasto to add texture to the much more thinly painted white paintings. The predominantly white works are drawings as much as they are paintings. Networks of graphite lines and shapes, geometric and biomorphic by turn, cover their surfaces, lines appearing above and through the paint. In places, the artist articulated the white paint by tamping it with a small cardboard box of the kind that tubes of paint are sold in. In spite of being intensively worked, the surfaces of the predominantly white paintings are somehow fresh and expansive, projecting infinity and enlightenment, in spite of their materiality.

Pousette-Dart grew up in a supportive and artistic environment. His father was a painter, Nathaniel Pousette, and his mother was a poet, Flora Louise Dart. One of his grandfathers was a French silversmith, Algot E. Pousette, Pousette-Dart grew up in a supportively artistic environment. With virtually no formal training as an artist, he dropped out of Bard College in 1936 after only a few months, to work independently as a painter and sculptor. By 1939, he was working fulltime as a painter in New York City. His first solo exhibition took place in New York in 1941. Success came early: Pousette-Dart was the youngest of the abstract expressionists, exhibiting with them from 1944.

Although Pousette-Dart mined many of the same sources as the other abstract expressionists-surrealism, Jungian psychology, and the art of non-Western cultures-his temperament and orientation set him somewhat apart from the New York school. Not a regular at the Cedar Bar, he was introspective, well read, and literary, filling notebooks with writings, as well as drawings, throughout his life. The shapes and symbols that fill his white canvases, as well as his other work, are not tied to fixed meanings. As some of the titles he gave to his works suggest-White Cosmos and White Stillness, for example-he was above all a spiritual man, and it was the spiritual nature of the universe that he said he was trying to express in his paintings.
In 1955, at Betty Parsons Gallery, New York, a gallery closely associated with abstract expressionism, Pousette-Dart first showed his white works, in a one-man exhibition called Predominantly White. The works currently on view at The Phillips Collection in Pousette-Dart Predominantly White Paintings comprise 23 paintings and works on paper, as well as four sculptures. Several of the works on view were in the 1955 exhibition. Many have not been seen for 50 years.

Robert Ryman (b. 1930) is an American painter best known for abstract, white-on-white paintings. Ryman was born in Tennessee and began his career as a jazz musician. Soon after arriving in New York in 1952 to pursue his music, he started to paint. A job as a guard at the Museum of Modern Art gave him the opportunity to spend hours at a stretch with paintings, and Ryman learned by looking.

From the beginning, Ryman was uninterested in painting recognizable things or telling stories in his paintings, and he took up the challenge of non-representational painting. When his works have titles, they are deliberately non-associative, assigned purely for identification purposes. His entire career has been devoted to exploring painting as a medium and process. At the beginning, Ryman used a lot of color, curious to see how it worked, but over time he came to work in a predominantly white palette. His preferred format, the square, is similarly neutral.

Ryman is interested in paintings as objects, as extensions of the walls to which they are affixed. For this reason, hanging devices-bolts, tacks, screws, and staples-are often integral to the works. His signature and the date also serve as compositional elements in the paintings. His investigation of painting has led him to use a wide variety of paints and supports-painting in casein, graphite, ink, gouache, oil, and acrylic enamel on canvas, paper, wood, aluminum, steel, and Tyvek. In the way that he applies his mediums, Ryman is as varied as his materials, using bold sweeps of paint, small strokes, drawn grids, and collages.
This exhibition brings together 26 small-scale paintings from private collections. Some of the works have rarely been shown in the U.S. Robert Ryman: Variations and Improvisations is the artist's first solo presentation in the Washington area.

Intersections
Intersections is a new series of contemporary art projects that explores-as the title suggests-the intriguing intersections between old and new traditions, modern and contemporary art practices, and museum spaces and artistic interventions. Whether engaging with the permanent collection or diverse spaces in the museum, the projects suggest new relationships with their own surprises.

Many of the projects also riff on the nontraditional nature of the museum's galleries, sometimes activating spaces that are not typical exhibition areas with art produced specifically for those locations.

Kate Shepherd is best known for large, vertical, mostly monochrome paintings in hi-gloss enamel on wooden panels. Using intense colors, delicate lines, and multiple perspectives, she suggests structures and patterns - wallpaper, steps, lace, a cage, for example - that create illusionary three-dimensional space. Her work in the former dining room of the Phillips house incorporates painting and sculpture and focuses on architectural details. Shepherd earned a BA from Oberlin College in Ohio and an MFA from the School of Visual Arts in New York City, where she lives and works. She has had numerous solo exhibitions and her work is featured in the collections of the Bibliothèque Nationale de France in Paris, the Detroit Institute of Arts, and the Museum of Fine Arts, Boston.

The Phillips Collection
1600 21st Street, NW | Washington, DC 20009
Hours:
open Tuesday to Saturday from 10 am to 5 pm, with extended evening hours on Thursdays until 8:30 pm, and on Sundays from 11 am to 6 pm., closed on Mondays.
Phillips after 5, from 5 pm to 8:30 pm on the first Thursday of the month, offers a lively mix of jazz performances, food and drink, gallery talks, films, and more.