Between Here and There

Passages in Contemporary Photography. In the 1960s and 1970s, photography was often embraced by artists who had abandoned conventional art media and who were more interested in creating a work of art that took place over a period of time, in a serial progression, or in a fleeting gesture. The exhibition features 22 artists whose photographic works convey a sense of a rootless or unfixed existence. Works by: Vito Acconci, Doug Aitken, Darren Almond, Lothar Baumgarten, Matthew Buckingham, Valie Export, Felix Gonzalez-Torres... 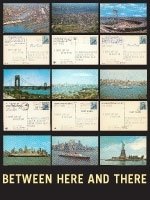 Themes of dislocation and displacement in contemporary photography will be explored in The Metropolitan Museum of Art's forthcoming exhibition in the Joyce and Robert Menschel Hall for Modern Photography. Drawn almost entirely from the Museum's collection, Between Here and There: Passages in Contemporary Photography on view July 2, 2010 through February 13, 2011, will feature 22 artists whose photographic works convey a sense of a rootless or unfixed existence.

In the 1960s and 1970s, photography was often embraced by artists who had abandoned conventional art media and who were more interested in creating a work of art that took place over a period of time, in a serial progression, or in a fleeting gesture. The individual painting or sculpture was deemed insufficient to represent the fragmented experience that characterizes the modern world; thus artists showed how a work of art could take the form of a walk (Richard Long), a 20-foot-long book (Ed Ruscha), or a series of postcards outlining the precise time that the artist got up each day (On Kawara). Since the 1980s, however, the more conventional practice of creating a carefully executed, singular photograph has regained prominence in contemporary art. Works by Rineke Dijkstra, Thomas Struth, and Weng Fen embody a belief in photography's traditional powers of description, while reflecting feelings of dislocation in our newly global society.

The first half of the exhibition shows how artists in 1960s and 1970s, working in the context of Minimal and Conceptual art, were drawn to photography for its differences from traditional art media: it was low-tech, easily reproducible, and not considered a valuable art object. Photography was also enlisted to document ephemeral works of art. Bruce Nauman and Vito Acconci, for instance, created performances that focused on the actions and movements of their bodies in space, and captured these works in photographs and videos.

Other artists, such as Robert Smithson, chose to work directly in the landscape—often in distant or inaccessible locations—and their "Earthworks" could generally be seen only through photographs. Smithson is best known for his landmark Spiral Jetty (1970) in the Great Salt Lake, Utah. For an early experiment in his Mirror Displacements series of photographs, Smithson placed small mirrors into snow drifts on the roof of his apartment building. Through dizzying shifts in scale, the artist's 1969 study transforms a corner of his Manhattan roof into an Alpine landscape.

A student of Anthony Caro, British artist Richard Long was well versed in the reductive quality of geometric abstraction, but sought to make his works even more simple and wedded to life. He would go for solitary walks in the countryside, and at a particular place he would create elemental forms such as a line, X, or circle by walking over the ground to leave a temporary imprint. Long's photograph County Cork, Ireland (1967)—in which a circle seems to hover over the grass like a flying saucer—is thus an imprint of an imprint, creating a holistic relationship between the concept, the action of the body, and the site of his gesture.

For her series Body Configurations, the Austrian artist Valie Export had herself and female colleagues photographed in local streets, as they contorted their bodies to mimic the harsh geometries of the city. Encirclement (1976) shows a woman lying in the street, her body elongated and arched to follow the bright red curve the sidewalk. The photograph reintroduces the human body into abstraction in an intimate yet public gesture.

Beginning in the 1980s, there was a renewed interest in photography's historical genres and recommitment to technical skill and visual fidelity, as seen in Rineke Dijkstra's portraits. Geopolitical displacement and cultural migration are referenced in one of Dijkstra's most important bodies of work to date: her photographs of a Bosnian refugee girl, Almerisa. Between Here and There will feature four portraits of Almerisa that Dijkstra made between 1994 and 2000, beginning at an asylum seekers' center in the Netherlands. Eight photographs from this series of 11 works were acquired recently by the Museum.

In both photographs and films, Doug Aitken explores the ways in which perception is transformed by our global, technology-driven existence. Aitken's photograph Passenger (1997), taken from the window of an airplane in flight, shows another plane flying in parallel in the remote distance, illuminated by the sun setting on a slanted horizon. Aitken references sensations of being adrift in mid-air and of "two ships passing"—paths that do not quite connect, despite their proximity to each other.

Chinese artist Weng Fen explores a young generation poised at a transitional moment between China's traditional rural society and a quickly burgeoning urbanism. Bird's Eye View: Haikou V (2002) shows a woman—perhaps an outsider or a new arrival to the city—perched on an old wall, looking toward the new skyscrapers on the horizon, but not fully occupying the space of the past or the future. This work is part of a group of recent gifts and promised gifts of contemporary Chinese photographs to the Museum.

The exhibition comes full circle with a recently acquired video by Erin Shirreff. Roden Crater (2009) takes as its subject artist James Turrell's legendarily inaccessible and still unfinished celestial observatory carved out of a 400,000-year-old extinct volcano. Shirreff's mesmerizing fixed-camera view of the distant "Earthwork" shows an improbable succession of slow-moving climactic and light effects on the crater, creating a haunting meditation on the never-ending quest for resolution in life and in art.

Between Here and There: Passages in Contemporary Photography is organized by Douglas Eklund, Associate Curator in the Department of Photographs.