On show 60 major works spanning seven decades of Neel's career. The exhibition is divided into sections according to Neel's thematic preoccupations: allegory, the essential portrait, the psychological portrait, portraits from memory, cityscapes, nudes, parents and children, the detached gaze, and old age. In addition, two archival films are on show. 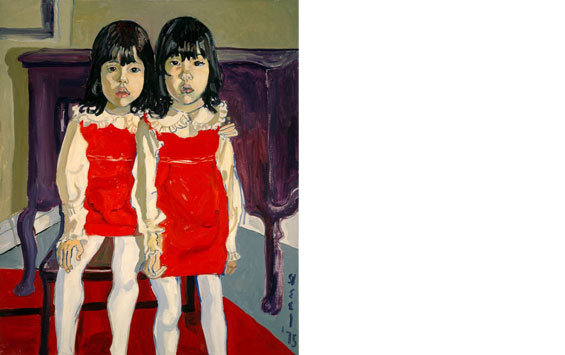 Alice Neel (1900–1984) is best known for her portraits of celebrated artists and writers from New York, including Andy Warhol, Frank O’Hara, Meyer Shapiro and Linda Nochlin.

A self-proclaimed ‘collector of souls’, she painted friends, family and neighbours in the Manhattan district of Spanish Harlem, delving into their personalities with rare frankness. Undeterred by a turbulent personal life that included a year of hospitalisation following a nervous breakdown, and the destruction in 1934 of over 250 paintings and drawings, it was only in her later years that she gained widespread recognition.

At a time when New York witnessed the birth of Abstract Expressionism, Minimalism and Pop Art, Alice Neel pursued the less fashionable discipline of painting people, and was a key force in reviving portraiture in the 20 century. She became a figure-head for the Feminist movement and is now much admired by a generation of younger artists including Peter Doig, Marlene Dumas, Chris Ofili, and Elizabeth Peyton.

Shown for the first time in Europe are 60 major works spanning seven decades of Alice Neel’s career. They include a portrait of Andy Warhol, who was famously sensitive about his ordinary looks and bad skin, which reveals the scars of his 1968 gunshot wounds. The exhibition is divided into sections according to Neel’s thematic preoccupations: allegory, the essential portrait, the psychological portrait, portraits from memory, cityscapes, nudes, parents and children, the detached gaze, and old age. In addition, two archival films are on show; an eight- minute silent film by Neel’s son Hartley, documenting the artist painting her daughter-in-law Ginny, and Michel Auder ́s film showing Neel painting Margaret Evans Pregnant.

Alice Neel (1900-1984) was born in rural Pennsylvania. On a scholarship she attended the first women-only art school in America (now Moore College of Art and Design), where she excelled at figurative painting. The early loss of her two daughters, the first to diphtheria and the second to her former husband’s family in Cuba, led to a nervous breakdown, and Neel was hospitalised. A few months after her release, Neel settled down to eke out an artist’s existence in Greenwich Village (New York).,. In 1938, Neel moved to Spanish Harlem to ‘find more truth’ continuing to paint family, friends, and neighbours. Upon moving to the Upper West Side in 1962, Neel began to re-engage with the New York art world. At age 74 Neel was recognised with a solo exhibition at the Whitney Museum of American Art.

Alice Neel: Painted Truths is supported by the Estate of Alice Neel and Terra Foundation. With additional support from David Zwirner and Victoria Miro.

Alice Neel: Painted Truths will be accompanied by a fully illustrated catalogue of the same title published by the MFAH and distributed by Yale University Press. The catalogue contains major essays by art historians Tamar Garb and Robert Storr, as well as by curators Lewison and Walker, who also contribute chapter introductions and entries on each work. In addition, three short appreciations are included by artists who admire Neel: Frank Auerbach, Marlene Dumas, and Chris Ofili.