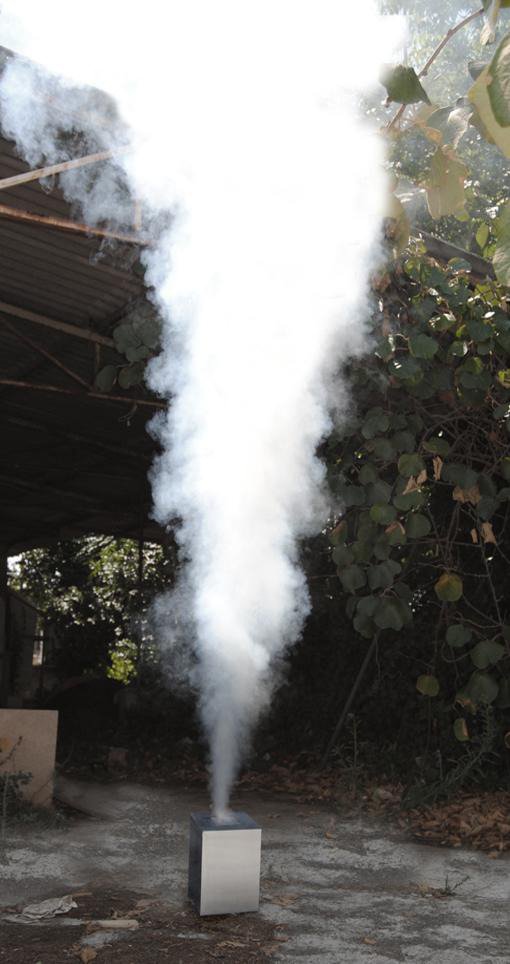 The show Reversible Mechanisms is the first presentation of young Italian artist Donato Piccolo in Slovakia. His work varies from drawing, sculpture, through installation to performance. He is interested in relation between art and science, focusing on scientific, philosophical and emotional aspects of the perception of physical phenomena.

As sculptural material he uses water, steam or light. The very important component of his work is interactivity. His works oscillate on the edge between rationality and emotionality suggesting on the one hand the scientific experiments and offering the direct experience of the natural effects on the other. The consequence of this approach is series of the objects, representing the hurricane, storm, or rain in the same way as we know them from the nature. They are closed in the glass cases or installed freely in the space. The works of Donato Piccolo are characterized by minimalist aesthetics and the use of functional shapes, and lab-like atmosphere. Recently his interest has been concentrated on the research of the reversible processes.

Reversible Mechanisms are physical, as well as mental processes able to be repeated anytime. The works – situations he creates are materialized and dematerialized, created and destroyed. The exhibition consists of installations, objects and drawings.

Hurricane’s Room (2010) is the hurricane installed freely in the closed room and it is possible to enter directly into it. The object Hurricane XI (Responsibility) (2010) belongs to the hurricane series created by water steam concentrated in the glass cubes. Donato Piccolo observes ephemerality and instability of the existence of selected natural phenomena and in the same time his own works. Water’s tachicardia (2009) is an glass object simulating the real function of the heart, Reversible III (2010) is a minimal object which produces casual temporary structures by water steam. Reversible Pavement (2010) is a steam interactive site-specific installation integrated in the floor of the gallery. Also ephemeral interactive sound installation is a part of the show.