Witte de With and TENT

Witte de With and TENT, Rotterdam

A large group exhibition that brings together a self-aware generation of Surinamese and Dutch artists. Against the background of the current political rift between the Netherlands and Suriname, the show positions the artist as arbitrator of the changing cultural, political and social relationships. In installations, paintings, photos, sculpture and videos, themes such as ancestry and future, history and politics, cultural identity and social issues are examined and discussed in the context of art. 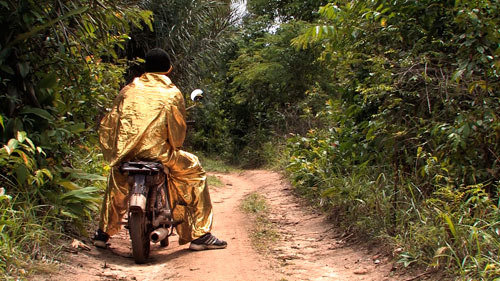 On 9 September the Rotterdam exhibition space TENT. starts the cultural season with Paramaribo Perspectives, a large group exhibition that brings together a self-aware generation of Surinamese and Dutch artists. The exhibition is the follow-up to a period of cultural exchange between artists from Rotterdam and Paramaribo. Against the background of the current political rift between the Netherlands and Suriname, Paramaribo Perspectives positions the artist as arbitrator of the changing cultural, political and social relationships.

Paramaribo Perspectives presents contemporary Surinamese art and shows the inspiration that Rotterdam artists found in Suriname. In installations, paintings, photos, sculpture and videos, themes such as ancestry and future, history and politics, cultural identity and social issues are examined and discussed in the context of art.

George Struikelblok (SR) places over a hundred hand-mirrors on the floor of the exhibition space. On theses mirrors, children from a number of orphanages in Suriname have written their hopes, fears and dreams for the future.

The wall installation by Dhiradj Ramsamoedj (SR) is a tribute to the pivot of his family: his ‘adjie’, or grandmother. The installation was originally on display in his grandmother’s house, where the artist rearranged the entire top floor. In TENT. he reconstructs the walls of her room and places almost a hundred aluminium mugs on the wall railings. These were previously used by his grandmother to earn a little extra money: she rented these beakers to neighbours for weddings, parties or funerals.

Neil Fortune (SR) is currently graduating from the Rietveld Academy in Amsterdam. He made a number of paintings in which he records his personal art history. Fortune does not choose icons of Western art history, but instead pays homage to artists, friends and colleagues that provide the inspiration for his artistic practice.

Ravi Rajcoomar (SR) created a monumental installation with more than twenty-five hanging silhouettes in a falling pose. With this work Rajcoomar attempts to make the relatively high number of suicides in Suriname a subject for discussion.

During his stay in Paramaribo, Jeroen Jongeleen (NL) used the walls of the city as the paper on which he wrote his observations, comments and reservations about the function of art in the public domain, the remnants of the Dutch colonial history and the necessity of the concept as basis for an artistic practice.

For several years Bas Princen (NL) has been photographing a goldmine in Suriname. The monumental photographs show a panorama of a nature violated and with confusing lines of perspective.

It is still unclear whether the recent election of Desi Bouterse will have implications for the work of Kurt Nahar (SR). For years Nahar’s work has consistently focused on the December Murders. In total-installations he brings together an overabundance of objects, photos, films, paintings, texts, furniture and found items. All the objects refer to the main figures in Suriname’s national trauma and the way in which this drama is conducted.

Opening debate Sunday 12 September 15 hrs
On Sunday 12 September TENT. is organizing the opening debate Conversations on Paramaribo Perspectives, which starts at 15 hrs. Under the motto 'a good exhibition is never the last word on its subject', journalist and programme manager at Fonds BKVB Özkan Gölpinar discusses and unravels the influence of ancestry, location or diaspora on the work of the artist and the effects of the current political developments on cultural ties between Suriname, the Netherlands and the rest of the world. Guests include Professor in the History and Theory of Contemporary Sculptural Art Kitty Zijlmans, artists Kurt Nahar and Sara Blokland, journalist and programme-maker Anil Ramdas, former director of the Rijksakademie Janwillem Schrofer and writer Usha Marhé.

Debate series
Series of discussions held in TENT. and debating podium De Unie on the potential and limitations of contemporary art for the purpose of understanding a post-colonial era of globalization. With Kitty Zijlmans, Leon Wainwright and artists Charl Landvreugd and Patricia Kaersenhout among others. Sun 12.09, 15 hrs; Wed 06.10, 18 hrs; Tue 12.10, 20 hrs; Tue 26.10, 20 hrs

stampa
permanent link
Witte de With and TENT
IN ARCHIVIO [3]