Claudia Wieser: Poems of the Right Angle features a site-specific installation of optical and spatial illusions that foregrounds Wieser's distinctive approach to abstraction. Artist's work marks the experiential and intangible through precise geometries imbued with layers of spiritual, psychic, and phenomenal meaning. The exhibition 'Gerhard Richter: Lines which do not exist' brings together artist's works on paper to explore his relationship to drawing by highlighting the asymptotic path between drawing and his work in other mediums, and charting his independent and often inconclusive investigations into representation and perception. 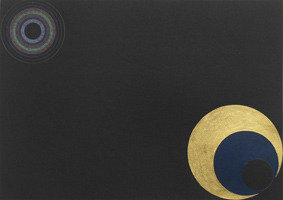 The Drawing Center will present the first solo museum exhibition in North America of work by the Berlin-based artist Claudia Wieser (b. 1973, Freilassing, Germany). On view in the Drawing Room from September 11 until November 18, 2010, Claudia Wieser: Poems of the Right Angle will feature a site-specific installation of optical and spatial illusions that foregrounds Wieser’s distinctive approach to abstraction.

Wieser’s work marks the experiential and intangible through precise geometries imbued with layers of spiritual, psychic, and phenomenal meaning. For her installation in the Drawing Room, Wieser will juxtapose a nine-foot prismatic wall relief constructed of glazed ceramic tile and mirrored facets with a new series of line drawings in colored pencil on paper. A geometrically patterned wallpaper, produced by scanning and enlarging handmade translucent paper collages, will serve as a backdrop for the drawings and mirror, creating the dizzying sensation of immersion in a Futurist painting.

Among other recent and historical artistic influences, Wieser is largely inspired by Formalism, Bauhaus color theory, and Le Corbusier’s ‘Proménade Architecturale’ walk-throughs. She gathers these diverse aesthetic approaches into an archive of universally resonant forms that engender associations with light, atmosphere, and natural phenomena. Testing the limits of traditional line drawing by creating seductive interplays between light and shadow, two and three dimensions, and tone and texture, Wieser’s art leads the viewer into contemplative spaces where the primacy of mark-making and viewing are fused. This exhibition is curated by Assistant Curator Joanna Kleinberg.

Claudia Wieser was born in Freilassing, Germany, in 1973 and currently lives and works in Berlin. She studied at the Akademie der Bildenden Künste in Munich from 1997–2003, and has exhibited in Europe at venues including Raum für Raum, K21 Ständehaus, Düsseldorf, Germany (2010); Oldenburger Kunstverein, Oldenburg, Germany (2009); Projectspace 176, London, UK (2008); Städtische Galerie, Waldkraiburg, Germany (2006); Kunstverein Munich, Germany (2003); as well as in the U.S. at a group exhibition at the Contemporary Art Museum, St. Louis, Missouri (2008). Her work will be exhibited at Kunstmuseum Stuttgart, Germany (in cooperation with Kunstmuseum Wolfsburg) in 2011.

Rubin Kodheli began playing the cello at age seven and graduated from the Juilliard School of Music in 2001. Rubin has performed, recorded, and toured with Dave Douglas's Nomad Ensemble, Henry Threadgill's Zooid, and Makoto Ozone's New Spirit. He has been a soloist with the Electronic Music Foundation of New York since 2002. Other credits include recording collaborations with Roberta Flack, Wyclef Jean, Norah Jones, and Vampire Weekend. Rubin continues to compose for his avant-garde rock band Blues in Space, as well as extensively for acclaimed feature films and television, including the Oscar nominated film Precious and the HBO series True Blood. Kodheli was born in Tirana, Albania, and lives and works in New York City.

Eleanor Norton graduated from the Peabody Institute of the Johns Hopkins University in 2002, where she served as principal cellist of the Peabody Symphony Orchestra. An active chamber musician, Eleanor has participated in many ensembles nationally, including the Bowdoin Summer Music Festival, the Aspen Music School, the Encore School for Strings, and the Round Top Festival. She regularly performs with the Artemis Chamber Ensemble in New York and the Metropolitan Chamber Orchestra. Norton lives and works in New York City.

To accompany the exhibition, The Drawing Center will produce a publication approximately 48 pages in length featuring full-color plates and exhibition installation shots with an essay by exhibition curator Joanna Kleinberg. Available in October.

Additional support is provided by the Foundation for Contemporary Arts.

Gerhard Richter: Lines which do not exist
Curated by Gavin Delahunty

The Drawing Center announces Gerhard Richter: "Lines which do not exist", a new iteration of an exhibition first presented at mima, Middlesbrough Institute of Modern Art, UK, in 2009. This presentation features a selection of 50 abstract graphite, watercolor, and ink on paper drawings made from 1966 to 2005. While Richter's painting has enjoyed critical acclaim throughout the world, his drawing practice remains more opaque and enigmatic.

This exhibition will bring together Richter's works on paper for the first time in the United States to explore his complex relationship to drawing by highlighting the asymptotic path between drawing and his work in other mediums, and charting his independent and often inconclusive investigations into representation and perception. The installation will consist of constellations of drawings arranged on shelves irrespective of chronology or technique, material, or scale. Suggesting something more open, adjustable, or even unstable, the exhibition design will allow previously unexplored connections to emerge between Richter's landscape, mechanical, schematic, abstract, and autographic drawings.

Gerhard Richter was born in 1932 in Dresden, Germany. Between 1952 and 1957, he studied art at the Kunstakademie, Dresden. Richter then moved to Düsseldorf, where he worked as a photo-laboratory technician before enrolling at the Staatliche Kunstakademie Düsseldorf under Karl Otto Götz from 1961 to 1964. He introduced his hybrid photo-painting style in his first exhibition in Düsseldorf in 1963 when he used his own photographs of landscapes, portraits, and still-lifes as source material and then deliberately "blurred" the depicted subjects or objects in the painting to differentiate the generative source material from the act of paining.

The Drawing Center is the only not-for-profit fine arts institution in the country to focus solely on the exhibition of drawings, both historical and contemporary. It was established in 1977 to provide opportunities for emerging and under-recognized artists; to demonstrate the significance and diversity of drawings throughout history; and to stimulate public dialogue on issues of art and culture.