Presence of Art - Yesterday - today - tomorrow. For this second edition nine museums and galleries are preparing high quality exhibitions. What characterized the art that defined life in Dusseldorf in the 60s, 70s, 80s and beyond? A retrospective of the rich creation of art from these years is the starting point in many shows. The museum kunst palast present works by Nam June Paik, the K20 a selection of works by Joseph Beuys, the Stiftung Schloss with James Lee Byars, the K21 is displaying Art of the 80s, the Akademie-Galerie with Anthony Cragg and Peter Doig and many more, the Kunstverein fur die Rheinlande und Westfalen "Real Presences. Marcel Broodthaers today" with selected works by internationally artists like Tacita Dean, Stephen Prina or Cerith Wyn Evans... 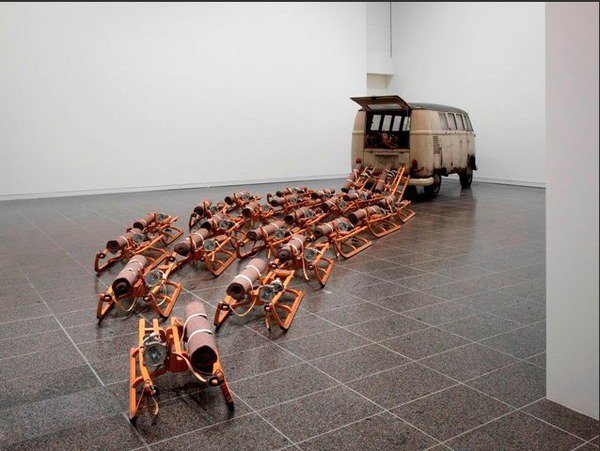 Art enthusiasts from Germany and abroad are looking forward to the second Quadriennale, which will open on the evening of September 10th, 2010 and ends in January 2011. Nine Düsseldorf museums and galleries are preparing high quality exhibitions with considerable grants from the regional capital, without which the ambitious exhibition plans would not be possible. Despite the general financial crisis, the city is supporting the Quadriennale with additional funds of approx five million Euros. "With this Festival of Arts, the city with an extensive artistic tradition underscores its reputation as an international city of arts," said Mayor Dirk Elbers.

Art in Düsseldorf
All along Düsseldorf is an important centre for modern and contemporary art in Germany. Many new and established museums and galleries as well as exhibition events are prominent in the city on the banks of the Rhine. The world famous Kunstakademie is at the heart of the museum landscape. Many internationally acclaimed artists such as Joseph Beuys and Bernd and Hilla Becher and their students have studied and taught there. Artists such as Byars, Broodthaers and Paik were attracted to the city and have worked there. Numerous younger-generation artists also made their start in Düsseldorf and are now established in the international art world.

Quadriennale 2010 - "Kunstgegenwärtig - Presence of Art"
"Kunstgegenwärtig - Presence of Art" – the title of this year's Quadriennale 2010. Yesterday - today - tomorrow. What characterized the art that defined life in Düsseldorf in the 60s, 70s, 80s and beyond? A retrospective of the rich creation of art from these years, a time in which Düsseldorf rose to become an international centre of the art scene and had an influence on art far beyond the borders of Germany, is the starting point for further inquiry as explored in many exhibitions. What significance does this art still have today? How does the current situation of the art scene in Düsseldorf and the surrounding area present itself? And: What significance will contemporary art in Düsseldorf have in the future? Along with taking a retrospective "back to the roots" look, a critical appraisal and current self-positioning will be undertaken. City councillor in charge of cultural affairs Hans-Georg Lohe on the thematic focus: "With a retrospective focus, the Quadriennale 2010 opens up a wide spectrum of contemporary art from the last 50 years, showing the multi-facetted interaction and the great international appeal of the Düsseldorf art scene. This is illuminated by the various exhibitions that never cease to amaze."

The programme: a focus with many facets.
The Quadriennale is already established as an important art event and in 2010 will also strengthen Düsseldorf's position as a long-term centre of art. A total of ten Düsseldorf museums and exhibition halls will take part in the Quadriennale 2010 with unique exhibitions. In addition to individual exhibitions in institutions such as the museum kunst palast that will be exhibiting works by Nam June Paik, the K20 that will be displaying a comprehensive selection of works by Joseph Beuys', or the Stiftung Schloss und Park Benrath with its James Lee Byars exhibition, there will also be group exhibitions. The K21 is displaying the exhibition "Auswertung der Flugdaten: Art of the 80s. A Düsseldorf Perspective“. The Akademie-Galerie will transform its rooms into an extensive installation of drawings by Joseph Beuys, Anthony Cragg and Peter Doig and many more. The NRW-Forum Düsseldorf will open with the "Der Rote Bulli. Stephen Shore and the New Düsseldorf Photography" exhibition. In this space, the imai - intermedia art institute will present furthermore an exhibition by Katharina Sieverding: "Projected data images".
The Kunsthalle Düsseldorf's contribution comprises two group exhibitions: In cooperation with KIT -Kunst im Tunnel, they are devoting themselves to the younger generations of Düsseldorf artists, represented by works by Katharina Grosse and Björn Dahlem. The collaborative exhibition of the Kunsthalle Düsseldorf and the Kunstverein für die Rheinlande und Westfalen "Real Presences. Marcel Broodthaers today" will present selected works by internationally renowned artists like Tacita Dean, Stephen Prina or Cerith Wyn Evans who refer in their works to Marcel Broodthaers œuvre.

For the first time a range of other Düsseldorf cultural institutions will join the Quadriennale as partner: the Julia Stoschek Collection, the ZERO Foundation, KAI 10 / Raum für Kunst der Arthena Foundation and the Langen Foundation. Under the title "German Premieres", the Düsseldorf galleries will present the positions of artists whose works have until now never been shown in Germany and will again confirm their reputation as being at the forefront of the active art scene with joint opening ceremonies on the first weekend of September 2010.

The Symposion: an impetus for further discussion and reflection
The many Quadriennale 2010 activities will be kicked off on September 8th and 9th by a symposion that will invite visitors and experts alike to engage in intensive debate about the forthcoming exhibitions and the thematic questions that they pose. Under the title "Objekte für alle und keinen" ("Objects for everyone and no one"), the symposion will reflect upon the dynamic eternal triangle among the artist, the art work and the viewer, and shed light upon how the recipient is also involved in creating the work. The language of the Symposion will be german.

Quadriennale GmbH
The City of Düsseldorf founded the Quadriennale GmbH in late 2008 to create sustainable content positioning and to ensure practical organisation of the Quadriennale. The City councillor in charge of cultural affairs, Hans-Georg Lohe, and Angela Eckert-Schweizer were elected as managing directors. The Chairman of the Supervisory Board is Mayor Dirk Elbers. The Quadriennale 2010 is a project by the Regional Capital Düsseldorf.

The central pressconference for the Quadriennale 2010 will be on September 8th at 11:30 am in the Kommödchen. On the 8th and the 9th September all institutions will offer journalists the possibility to see the shows and talk to artists and curators.