Night of the Pawn 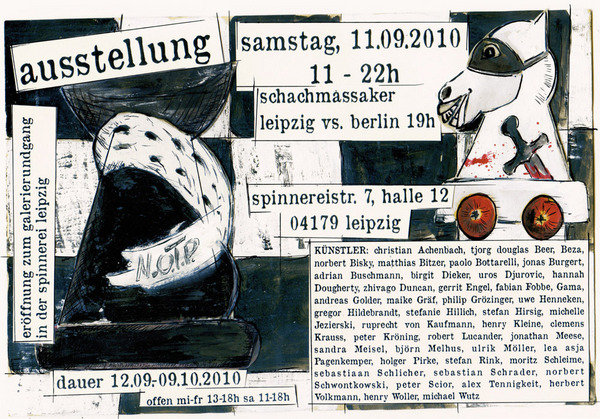 At this year’s tour of the grounds of the historical cotton spinning mill in Leipzig in September, a chess tournament in Hall 12 featuring Berlin artists pitted against Leipzig artists will open the group exhibition entitled “Night of the Pawn” (NOTP). The exhibition featuring 40 artists from Berlin, assembled by Jan- Philipp Sexauer, can be explained through the history of the event. In February 2008 the Berlin based lawyer and art lover Jan-Philipp Sexauer invited a group of artists to an evening chess tournament at the Wohnmaschine gallery in Berlin, which was at the time being operated by the gallerist Uwe Karsten Günther from the Laden für Nichts (“Shop for Nothing”). The painter Philip Grözinger created a poster of a “Chess Player” (a naughty looking lad with a bottle of wine in front of him and a pawn in his hand, ready for the battle), and the poster turned into a programme. Pawns are the weakest chess fi gures, but many players are of the opinion that they are the soul of the game. Already Marcel Duchamp published a study on the endgame with pawn and king.

Since 2008 the NOTP has been taking place once every four weeks in Berlin at an industrial complex that was built in the same year as the cotton spinning mill in Leipzig. Here there’s a club with beer, smoke and whiskey in a back room where the regal game of chess is played to the improvised music of Miles, Mingus and Monk. There are eight boards, sixteen players, and eight rounds, all followed by a party. The artists design the posters, as Duchamp had done in 1925 for the French championship. Chess is a fi erce battle; the goal is to topple the king. The entire state is involved symbolically—the foot soldiers (pawns), the knights, the bishops, and the castles, not to mention the king and queen—and nothing is left to coincidence. But since no real blood fl ows, chess is not a war but a thinker’s game. Contrary to widely held opinion, not only logic is involved; the game is also more broadly determined by aesthetic thought: visual and spatial thought, sometimes even intuition. Chess is, above all else, also an art of seeing.

In March 2010 Tjorg Douglas Beer invited participants to a NOTP at the FORGOTTEN BAR PROJECT in Berlin Kreuzberg, a chess tournament amidst works on the subject of chess – by the way, a very old subject in art. Prominent examples are “The Chess Players” by Lucas van Leyden (1508, now at the Gemäldegalerie Berlin), “Marcel Duchamp - A Game of Chess” (with a naked player, 1963; Pasadena Art Museum), and Gregor Hildebrandt’s Installation “The Chess Game” (2008).

The exhibition concept for Hall 12 in Leipzig follows the arithmetic of the game. The chess board is divided up into columns of eight by eight. Thus the hall is also divided by “columns” (pillars) into eight fields, and the right side is again divided into four rooms. In each room there are two artists “pitted against” one another with four works each. Thus 32 works in total, as many as there are figures on a chessboard. In the left half of the hall the chess tournament takes place. Eight artists from Berlin play against eight artists from Leipzig, and each player has a total of eight minutes for each game. There is also a huge wall adorned with 32 works by as many artists, and thus a total of 64 artworks on the subject of chess. The tournament table with eight chessboards remains for the duration of the exhibition so that the visitors can themselves become artists. For, according to Duchamp’s motto, not every artist is a chess player, but every chess player is an artist. Both apply at the Night of the Pawn”: not only is every chess player an artist, but every artist is also a chess player. The exhibition will be accompanied by a publication entitled “Night of the Pawn” including 8 etchings with a print run of 16.

The website www.pawn-night.de will certainly reward your attention; particularly the films about the NOTP by Uros Djurovic are worth seeing.