Alec Soth's America explores the past 15 years of work by one of the most compelling voices in contemporary photography. The exhibition, curated by Siri Engberg, focuses on his pictures made in the United States. Featuring more than 100 photographs, the presentation includes a major new body of work, Broken Manual, as well as selections from his well-known series Sleeping by the Mississippi, Niagara, Fashion Magazine, The Last Days of W., and a number of other projects. 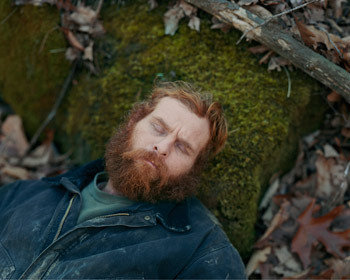 The first major survey for the artist in the United States, From Here to There: Alec Soth's America explores the past 15 years of work by one of the most compelling voices in contemporary photography. While Soth's practice has taken him throughout the world – from Paris to London to Bogotá to the country of Georgia – the Walker exhibition, curated by Siri Engberg, focuses on his pictures made in the United States. Featuring more than 100 photographs, the presentation includes a major new body of work, Broken Manual, as well as selections from his well-known series Sleeping by the Mississippi, NIAGARA, Fashion Magazine, The Last Days of W., and a number of other projects. The exhibition and its 224-page catalogue will also cast light on the multiplicity of the artist's practice, which extends from exhibitions to book publishing to his online blog that serves as a venue for experiment and exchange.

Soth's working process is firmly situated in a tradition established by photographers such as Robert Frank, Stephen Shore, William Eggleston, and Joel Sternfeld, whose work has the American road at its heart and whose images persistently capture average individuals and everyday settings. Soth's is a distinct perspective, however: the act of wandering, the method of embracing serendipity when seeking out his subjects, and the process of telling are as resonant as the photographic record of his encounters. He has said that the method of engaging his subjects is like "web surfing in the real world"; he follows leads with the fervor of a detective, and allows each encounter with a place or individual to segue to the next through a kind of free-associative research.

The artist first received wide public attention and critical acclaim in 2004 with Sleeping by the Mississippi, an ambitious five-year project during which he captured people and places as he traveled the length of the Mississippi River. NIAGARA, Soth's next major American project, focused on the eponymous waterfall that has long stood in the national vernacular as a symbol of grandeur and romance. What Soth finds at the falls and in the aging environs of tourist motels are complex stories that form a contemporary mythology of love's promises and failures. Featured prominently in the exhibition, Broken Manual investigates places in which people escape civilization, capturing individuals who have chosen to live off the grid such as monks, survivalists, hermits, and outlaws. The series includes literary contributions from author Lester B. Morrison, who grew from the artist's publishing imprint Little Brown Mushroom Books. Mining a very different side of the American experience than Soth's previous work, these pictures and words probe into deeply psychological terrain. Collected as an installation, they create compelling, often dark vignettes of America's fringes.

Other bodies of work featured in the exhibition include a rarely seen group of Soth's early black-and-white photographs made in Minnesota; a new series focused on women in Louisiana who embrace the goth lifestyle; and The Loneliest Man In Missouri, a series of snapshots and short diaristic texts that capture the banality of middle America's corporate office parks and strip malls.

Exhibition Catalogue
From Here to There: Alec Soth's America is the first exhibition catalogue to consider the full spectrum of Soth's work. Featuring more than 100 of the artist's photographs reproduced in full color, the book includes new critical essays by exhibition curator Siri Engberg, curator and art historian Britt Salvesen, and critic Barry Schwabsky that offer context on the artist's working process, the photo-historical tradition behind his practice, and reflections on his latest series of works. Novelist Geoff Dyer's "Riverrun" – a meditation on Soth's series Sleeping by the Mississippi – and August Kleinzahler's poem "Sleeping It Off in Rapid City" contribute to the thoughtful exploration of this body of work. Also included in the publication is a 48-page artist's book based on The Loneliest Man In Missouri and a conversation with the artist by Walker assistant curator Bartholomew Ryan.