New works. His painted world is sinister, disturbing and inhabited by a cast of victims and torturers in barren landscapes and paltry rooms. The boundary between life and death finds its visual echo in the line between figuration and abstraction. 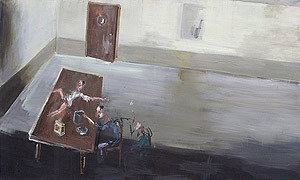 Evil will always be an option of human freedom. The characters of the dutch painter Aaron van Erp (* 1978) seem to make this choice always unidirectional. His painted world is sinister, disturbing and inhabited by a cast of victims and torturers in barren landscapes and paltry rooms.

Like in the works of Francis Bacon or the belgian artist James Ensor the spectator of a van Erp is consistently overcome by the uneasy feeling of being an accomplice, a witness to all the dark fortitudes he or she normally suppresses. As the paintings of the young dutch artist reveal, evil is particularly found in human beings. Even though culture should bring civilization and well-being, it leads to exorcism, rituals, murder and war. And because the human tragedy is thus endlessly prolonged, there is little else for us to do but laugh. Just like van Erp, who balances the harrowing with the trivial and ridiculous by using ironic work titles and an airy, fragmentary representation of the human figure: On the one side his actors seem to break through the canvas as if the invisible part of their body is yet to follow. On the other side, the missing body parts look as if they have already been dissolved into nothingness. With a minimum of identifiable pictorial elements van Erp succeeds in tickling the imagination as much as possible. The boundary between life and death, good and evil, seems to find it’s visual echo in the thin line between figuration and abstraction. It is this contrast between serious subjects and the seemingly primitive-naïve style of painting, what makes Aaron van Erp’s work particularly extraordinary – thanks to a wonderful mixture of open-mindedness and a pretended pictorial imperfectness it is as if we see all horrors through the eyes of a child.

Aaron van Erp has established a reputation as one of the foremost exponents of a younger generation of painters who are working in the wake of Neo-Expressionism in Europe. After finishing his studies at the St. Joost School of Art and Design Hertogenbosch, Netherlands in 2001, he has participated in numerous group exhibitions including “Sieben auf einen Streich” at MARTa Herford (2006), curated by Jan Hoet and ''Strange Brew'' at Max Lang Gallery, New York (2007), curated by Wolfgang Schoppmann. Comprehensive solo exhibitions took place at the Stadtmuseum Gütersloh (2008), IBID Projects London (2008), Sperone Westwater New York (2008), the Stedelijk Museum Hertogenbosch, Netherlands (2007) and the Gemeentemuseum The Hague (2007), to name just a few.

Aaron van Erp’s solo exhibition at the Gallery KUNSTAGENTEN is accompanied by the 106-page catalogue “Soep”.

(Text based on essays by Rogier Ormeling)