'From One to Many, 1956-1974' places Pistoletto's work in the context of the postwar sociocultural transformations of Italy, Western Europe, and North America. The exhibition will include more than one hundred works of art that will range from early self-portraits to subsequent series of works. 'Cittadellarte': this exhibition presents the artist's current work from his interdisciplinary laboratory, founded by Pistoletto in his hometown of Biella in 1998. The installation will play host to a series of performances, lectures, and workshops to bring the innovative spirit of this artistic center. 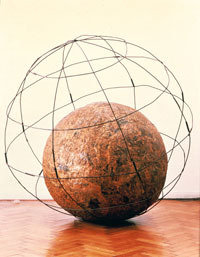 In the fall of 2010, the Philadelphia Museum of Art will present a major exhibition devoted to the work of Michelangelo Pistoletto (b. 1933) in the Dorrance Galleries for Special Exhibitions. Widely recognized as a key figure in the development of Italian art in the 1950s and 1960s and a founding member of the Arte Povera movement, Pistoletto has also gained increasing recognition in this country as an important influence on a younger generation of artists involved with the participatory practices that have become increasingly prevalent in contemporary art during the past two decades. The first major survey of works by Pistoletto in the United States in more than twenty years, this exhibition will place his art in the context of the cultural transformation of Western Europe that occurred after World War II and relate his work to developments in Italian and American art since the 1960s, including Pop Art, Minimalism, Arte Povera and Conceptual Art. Drawn from public and private collections in Europe and the United States, it will include some 100 works, many of which have never been exhibited in this country.

Michelangelo Pistoletto: From One to Many, 1956-74 is organized by the Philadelphia Museum of Art in collaboration with the Museo nazionale delle arti del XXI secolo (MAXXI), Rome. In addition, Michelangelo Pistoletto: Cittadellarte, an interactive installation that explores the work of Pistoletto’s interdisciplinary center for art and culture located in Biella, Italy, will be on view in the Museum’s Modern and Contemporary Art Galleries. As both an exhibition space and an educational platform, Cittadellarte will be animated by a stimulating program designed by the Museum’s Department of Education in close collaboration with the artist and the staff of Cittadellarte.

“We are fortunate to be able to present a comprehensive survey of the work that Pistoletto created during a period of time when he was at the very forefront of contemporary artistic practice,” said Timothy Rub, the George D. Widener Director and CEO of the Museum. “This will be a major opportunity for American audiences to examine the nature and broad significance of Pistoletto’s many contributions to the art of our time, including his current focus on community participation as manifested in the ongoing project that he has titled Cittadellarte. We are also delighted to be able to collaborate with our colleagues at MAXXI in Rome, to which From One to Many will travel following its showing in Philadelphia.”

Taking Pistoletto’s first self-portraits as a point of departure, Michelangelo Pistoletto: From One to Many, 1956-74 will examine the artist’s revelatory journey from his rigorous examination of self-representation in the mid-1950s through his engagement with creative collaborative actions during the late 1960s and early 1970s. Pistoletto’s extraordinary self-portraits of the 1950s, painted in Turin where he worked at the beginning of his career, demonstrate an incisive exploration of the tension between the individual human figure and the anonymous spectator. In these works he began to use increasingly reflective surfaces, a direction that ultimately led to the production of the first of his Quadri specchianti (Mirror Paintings) in 1962. Pistoletto created his Quadri specchianti by attaching figures—which he had hand-painted on tissue paper—to the mirrored surfaces of polished stainless steel panels. By doing so, the artist incorporated the viewer’s reflected image, making this interactive and figurative relationship fundamental to the experience of his work. An extensive selection of Mirror Paintings dating from 1962 to 1974 will enable visitors to trace the evolution of the artist’s technique and to map the sociopolitical changes that occurred in Italy during that period, which are clearly identifiable in Pistoletto’s progressive choice of subject matter.

The exhibition will also include sections devoted to Pistoletto’s Plexiglas works from 1964 that clearly prefigure Conceptualism, his Stracci (Rags) sculptures of the late-1960s and early-1970s that demonstrate his seminal contribution to the development of Arte Povera, and interactive documentation of the performance work that he produced with his Lo Zoo group from 1968 to 1970. A centerpiece of the show will be Pistoletto’s extraordinary Oggetti in meno (Minus Objects), a group of disparate sculptural objects that he created between 1965 and 1966. With the Minus Objects, Pistoletto tests and questions Minimalism’s emphasis on seriality and non-compositionality by creating works characterized by diversity and by drawing inspiration from fields as varied as artisanship, architecture, design, and popular culture. As with the rest of Pistoletto’s work, the connecting factor in his Minus Objects is a precise use of contingency, the artist’s knowledge and love of materials, and a passionate emphasis on singularity and difference.

In the Museum’s Dorrance Galleries, the exhibition will place these bodies of work in close dialogue with each other. “The exhibition in Philadelphia will progress chronologically, allowing the visitors to understand and situate Pistoletto’s works in relation to the profound and swift transformation of the Italian context in which he was working,” said Carlos Basualdo, the Keith L. and Katherine Sachs Curator of Contemporary Art. “Pistoletto’s Mirror Paintings will punctuate other series throughout the exhibition—such as the Minus Objects and the Rags—to elucidate Pistoletto’s clear artistic evolution and the impact of the cultural and political milieu on his practice.”

Catalogue:
In conjunction with the exhibition, the Philadelphia Museum of Art will publish an illustrated catalogue edited by Carlos Basualdo, with contributions by art historians Jean-François Chevrier, Claire Gilman, Gabriele Guercio, and Angela Vettese, as well as the Museum’s Conservator of Paintings, Suzanne Penn. The catalogue will include plates for all works on view, pairing the Mirror Paintings with documentary photographs of the works. For the first time in a major catalogue, much of the source photography that Pistoletto commissioned, manipulated, and replicated for his Mirror Paintings will be published in an effort to shed light on the artist’s intricate creative process and relate it to his interest in stagecraft and the theater. The English-language catalogue, designed by Abbott Miller of Pentagram, is co-published by the Philadelphia Museum of Art and Yale University Press.

Michelangelo Pistoletto: Cittadellarte, a related presentation in the Gisela and Dennis Alter Gallery (176), will provide visitors with the opportunity to participate in a variety of activities connected to Pistoletto’s ongoing project titled Cittadellarte. Pistoletto founded Cittadellarte in Biella, Italy in 1998, and has developed the mission of this multifunctional foundation to place “art at the center of a responsible process of social transformation.” Cittadellarte—whose name implies both a fortified enclave and city of art—is organized around several offices dedicated to diverse fields of study, including Economics, Education, Politics, Ecology, and Communication. Working autonomously, each office advances programming related to Cittadellarte’s goals through thoughtful dialogue and societal engagement.

As is the case with From One to Many, this related project has been developed in close dialogue with the artist. Working together, Cittadellarte and the Museum’s Education Department have designed a stimulating schedule of events that will include lectures, workshops, classes, and family programs—several of which will take place in the Alter Gallery, bringing the innovative spirit of this artistic center to the Museum and the city of Philadelphia. The series of active and varied programming will focus on three central concerns of Cittadellarte: the Caribbean sea as a hotbed for diversity and cultural exchange; Love Difference, a program targeted to the development of a culture of tolerance and respect; and Sustainability, which Cittadellarte applies to areas of economics and development as much as to the environment.

A central element in the installation of Michelangelo Pistoletto: Cittadellarte at the Museum’s Alter Gallery will be two large tables that have been fabricated in the shapes of the Caribbean and Mediterranean Seas, acting as both a physical setting for conversation and a metaphor for exchanges across cultures. To Pistoletto, the etymology of Mediterranean—middle from “medi” and land from “terra”—articulates a concept of space that exists between lands, and therefore between people, defining in turn a locus for communication and exchange.

This presentation will be accompanied by a publication containing a master schedule for all the Cittadellarte-related events and activities throughout the run of the exhibition. This comprehensive brochure will also include texts describing the activities and goals of Cittadellarte, as well as a discussion of the origin of the foundation, which derived from the artist’s collaborative projects in the 1960s, 1980s and 1990s.

The exhibition is made possible by The Pew Center for Arts & Heritage through the Philadelphia Exhibitions Initiative, and by The Andy Warhol Foundation for the Visual Arts and The Kathleen C. and John J. F. Sherrerd Fund for Exhibitions. Additional support is provided by Galleria Lia Rumma, Le Méridien Hotels, and GALLERIA CONTINUA, San Gimignano / Beijing / Le Moulin; by Christie’s, Luhring Augustine, Galleria Christian Stein, and Simon Lee Gallery; by Barbara B. and Theodore R. Aronson, Lynne and Harold Honickman, Jane and Leonard Korman, Harriet and Larry Weiss, and Sankey and Connie Williams; and by the Philip and Muriel Berman Foundation, Jill and Sheldon Bonovitz, and Jaimie and David Field.

The exhibition was organized by the Philadelphia Museum of Art and MAXXI-Museo nazionale delle arti del XXI secolo, Rome.

The catalogue is made possible by illycaffè and The Andrew W. Mellon Fund for Scholarly Publications.