Guise of Satan. London Mission. Reverend Acres plays on the history of the holy fool, fusing the flamboyant and the humorous with a deep and genuine spirituality. For the Reverend's first show in the UK, students on the MA in Curating Contemporary Art at the Royal College of Art have developed a project with the artist that will draw upon the breadth of his eclectic practice. fa projects will host an exhibition and function as the London Mission's headquarters. 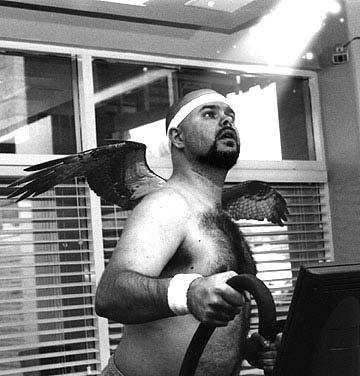 A project by students on the MA in Curating Contemporary Art, Royal College of Art.
Supported by the Monique Beudert Fund.

Raised to take on the mantle of his circuit-preacher stepfather in the poor rural South of America, the Reverend Ethan Acres seeks 'to defeat the Devil in all his evil forms' and strives to put the 'fun back into fundamentalism'. Ordained as a minister by the World Christianship Ministries, the Reverend also holds a Master of Fine Arts degree from the University of Nevada, Las Vegas. Acres's practice includes elaborate and eccentric rituals, goofy biblical sculpture, home baking and esoteric digital prints.

Reverend Acres plays on the history of the holy fool, fusing the flamboyant and the humorous with a deep and genuine spirituality. For the Reverend's first show in the UK, students on the MA in Curating Contemporary Art at the Royal College of Art have developed a project with the artist that will draw upon the breadth of his eclectic practice. fa projects will host an exhibition and function as the London Mission's headquarters. The exhibition, Guise of Satan takes as its subject the legendary glam-rock band KISS, on which a sermon will be delivered at the exhibition's opening.

In parallel with the exhibition, the Reverend's London Mission will incorporate a series of performances and events taking place throughout the city.

On Sunday 20 October, the Reverend will stage a performance/sermon concluding at Tate Modern. Drawing on the proximity of St. Paul's Cathedral and the Millennium Footbridge that connects the two institutions, the Reverend will speak - with choral accompaniment - about the bridge between religion and art. The Mission will conclude with a finalÃ© at the recently restored Eve Club on Regent Street on the evening of 25th October. The club originally opened in the early 1950s and is allegedly where Mandy Rice Davies and Christine Keeler worked as dancers when Keeler first met John Profumo. Frank Sinatra, Errol Flynn and Judy Garland were regulars at The Eve when in London and would often give impromptu performances. The interior is an uncanny blend of the Garden of Eden and 50s nightclub kitsch. Its coloured glass hydraulic dance floor, installed in 1953, is the only one of its kind in London.

* MONIQUE BEUDERT FUND
Monique Beudert (1950-99) was a gifted curator who worked for eleven years at the Museum of Modern Art, New York and for five years at the Tate Gallery, London. She was widely respected as a curator who had a special sympathy for artists and an exceptional ability to present contemporary artworks in a museum context. A group of her friends have created a Fund in her memory.

The Fund is used each year to support special projects undertaken by students on the master's programmes in curatorial studies at the Royal College of Art, London and the Center for Curatorial Studies at Bard College, New York. Last year (2001), the Royal College of Art's inaugural project was David Lamelas: The Impossibility of Information, an exhibition and symposium at the Camden Arts Centre, London. The Fund focuses on exchange of ideas between Europe and the Americas, encouraging students in each institution to study and present contemporary work by artists from the other side of the Atlantic. Projects may take the form of exhibitions, publications, lectures, symposia or manifestations using electronic media.

* CURATING CONTEMPORARY ART
TWO YEAR MA AT THE ROYAL COLLEGE OF ART
The course was set up in 1992 and is the first postgraduate programme In Britain to specialise in curatorial practice relating to contemporary art. The course is designed to offer both a vocational training in and an academic study of curatorial practice, underpinned by an understanding of the wider cultural and critical context. The course provides an introduction to the ways in which the contemporary visual arts are funded, presented, interpreted and managed in Britain and internationally. Students gain practical skills in curating exhibitions and managing art commissions and meet a wide range of professional curators, critics, artists and administrators. The programme provides a professional preparation for curators, exhibition organisers, critics, arts administrators and those who wish to work with artists to present art outside a gallery setting. The course is co-funded by the Royal College of Art and the Arts Council of England.