The newest installation of the artist called '(naked) absence - (blinding) presence... (dis)appearances'. "When in contact with light, I do not think: light has its own instinctive behavior that reveals individual emotions". 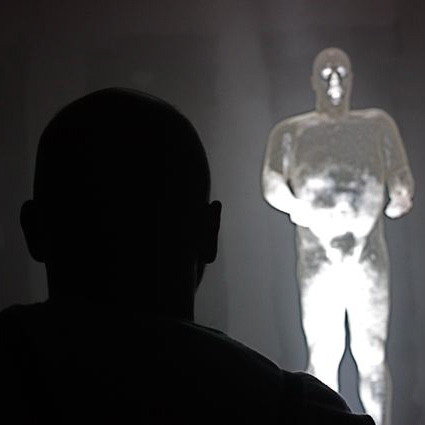 “Light doesn't have words. It does not speak intellectually. It’s pure emotion”.

“The speed of light and its intensity are often used to embody power, to stress and represent wealth, or to create safe zones. Yet light, like sound, vibrates to create a sensation of weightlessness and softness; as if everything it touches suddenly slows down. Light illuminates a new breath, a new pace. Next to light, there is nothing more powerful than the mirror – a subjective hole inside reality - to attract the visitor's attention, thereby forcing one to dive into oneself.

When in contact with light, I do not think: light has its own instinctive behavior that reveals individual emotions. Extending its scope to the 3 and 4 dimensions, it reaches everyone in a unique way. Emotional by nature, so is the intrinsic meaning of the installation I have created at The Invisible Dog.”
Thierry Dreyfus

Working with one of the most elusive and often underappreciated elements – light – Thierry Dreyfus has explored many of its intangible facets. Following a commission by the French Ministry of Culture, Dreyfus illuminated the Grand Palais, a historical monument built last century, for the Universal Exhibition, located at the base of the Champs Elysées, bedazzling over 500,000 visitors. Additonally, through a series of vertical light beams, Dreyfus elevated the Gardens of the Chateau de Versailles and, most recently, working with a commission by the City of Paris, Dreyfus plunged the Catholic cathedral Notre Dame de Paris into darkness only to both poetically and physically enlighten it from within during the 2010 Nuit Blanche. All in all, over the past 30 years, Dreyfus has sculpted, drawn, and projected light onto prints, objects, scenographies, and historical monuments in endless innovative ways. Currently, Thierry Dreyfus is working on enlightening installations for Istanbul’s Galata tower, the Montecassino convent, and the Duomo Museum in Milan.

Art director, photographer and artist since 1985, Dreyfus first started experimenting with light inside theatres and operas. Since then, Dreyfus has created some of the fashion industry’s most unique and memorable sets in Paris, Milan, London, and New York, including long-term collaborations with Helmut Lang, Dior Homme, Calvin Klein, Comme des Garçons, Jil Sander, and Proenza Schuler.

According to Suzy Menkes, from the International Herald Tribune, “Thierry Dreyfus is the man who is making the City of Light live up to its name. The designer is the master of the soft glow, bright beams and laser lines. Dreyfus may be an artist with light, but he is too modest to give himself that title or to compare himself with conceptual neon experimenters of the 1980s and with the light installations of the American artist James Turrell”.

As Christmas Eve is a most unusual date for an opening, Dreyfus thinks it only fitting that this event should come in the form of a celebratory dinner. As such, Dreyfus has generously offered to delight his guests both visually and gustatorily. Serving equal parts piping hot electric art and delectable dishes of French cuisine, Dreyfus curates a night filled with laughter, libations, and, of course, light. This extraordinary opening will literally take place amongst Dreyfus' newest exhibition,

As dining space is limited (30 people), please purchase your tickets ASAP, either online or in person at The Invisible Dog. For $50 a person, Thierry Dreyfus will exclusively dazzle you with his culinary artistry while delighting you with his latest light installation (please bring a favorite bottle of wine to share with your newest friends).

For those who might have overly indulged their budgets on holiday presents and the like this season, rest assured, you too are welcome...

Where else can you attend an art opening on Christmas Eve?! This is sure to be one of the most unique opening night parties / gourmet private dinners / Christmas Eve celebrations you have ever attended. We truly hope you can participate with us in this exceptional moment.
Lucien Zayan
Director

The Invisible Dog Art Space
51 Bergen Street, Brooklyn
Opening hours: Thursday to Saturday, from 1pm to 7pm; Sunday from 1pm to 5pm.
Tuesday and Wednesday by appointment only. Closed Mondays