This exhibition provides a multilayered view of the artistic production of the featured artists and the role of their friendship with the two key protagonists, Dora Stiefelmeier and Mario Pieroni. Hence the title of the show which presents, by way of a variety of artworks, letters, poems, and documentary photographs, the many years of their active cooperation and friendship. 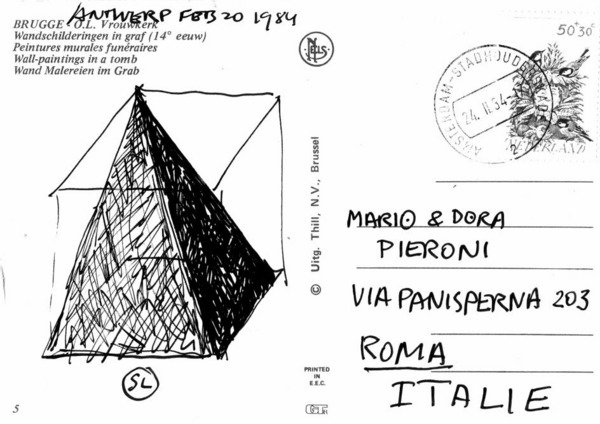 This exhibition provides a multilayered view of the artistic production of the featured artists and the role, or perhaps simply a visual reflection, of their friendship with the two key protagonists, Dora Stiefelmeier and Mario Pieroni.

The selection of works and the display design on the first floor: Irwin

Consisting of several segments, this exhibition provides a multilayered view of the artistic production of the featured artists and the role, or perhaps simply a visual reflection, of their friendship with the two key protagonists, Dora Stiefelmeier and Mario Pieroni, whose archives, collection of artworks, and current projects are put on view. The process of the selection for and the staging of the exhibition were guided by the predominant idea of showing Stiefelmeier and Pieroni’s participation in the production of artworks, their work on exhibitions, and, last but not least, their informal and congenial associations with numerous prominent figures both on the Italian and international art scenes. Hence the title of the show Compagni di viaggio / Traveling Companions, which presents, by way of a variety of artworks, audio archives, videos, postcards, letters, poems, and documentary photographs, the many years of their active cooperation and friendship.

The drawings, sculptures, postcards, letters, and artist’s books with inscribed dedications displayed on the first floor bear witness to the lively activities of the Pieroni Gallery in the 1970s and 1980s, of the non-profit organization Zerynthia established in the early 1990s, and of radio RAMradioartemobile. This collection had grown out of the decades of close contacts between Stiefelmeier and Pieroni, on the one hand, and artists and other figures on the international art scene, on the other. Both the selection of works and documents and the design of their display are the work of the Irwin group, who have used the material to produce a distinct view, interpreting and translating into exhibition format the story of professional and friendly links between people of different generations and styles of expression. Most artists are presented with a single artwork, or even only with a postcard they sent on some occasion or other (intervening in the given visual image, putting their thoughts in writing, in the intervention, or in the choice of motif), with a taped video work they made, having been unable to meet in person, or even an intervention in Stiefelmeier and Pieroni’s home or gallery. This provides visitors with an opportunity to see a great deal of documentary material and artworks, which in their diverse ways reflect the cordial links between, as well as some quite intimate details in the lives of, Stiefelmeier, Pieroni, and the artists.

For the first few days of the broadcasting, radioCona will have its studio on the ground floor of the gallery, broadcasting live program on 88.8MHz and on www.cona.si/ in collaboration with RAM radioartemobile www.radioartemobile.it that will include, in addition to the selected audio works and sound art projects, interviews, talks, and other content.

The current projects are exhibited on the second floor: a number of sound works; the archive of the SoundArtMuseum (established in 2004 and curated by Lorenzo Benedetti, Riccardo Giagni, and Cesare Pietroiusti, it has over 1,000 audio works); and the second station of the Il treno project (the first one was in Turin on November 6, 2010), entitled Landscapes on the Move, curated by Lorenzo Benedetti and Cecilia Casorati, and presenting works by Donatella Spaziani, Liliana Moro, Mario Airò, Massimo Bartolini, Dario D’Aronco, Marco Fedele di Catrano, Valentino Diego, Donatella Landi, Eva Marisaldi, Alfredo Pirri, and special guests of the Train project, Jannis Kounellis and Alvin Curran. The sequence of exhibitions, meetings, and short trips creates the connections between the chosen galleries, while metaphorically the title can be understood to refer to the rapid succession of scenarios and stories changing in the art spaces as quickly as they would on a train, broadening the horizons of the viewers-passengers in the process.

Also Ferdinando Vicentini Orgnani’s documentary S.T. (Untitled), a work in progress featuring many of the artists participating in Compagni di viaggio, and Jimmie Durham’s film Pursuit of Happiness will be screened as part of the exhibition.
Alenka Gregorič