The exhibition has been conceived of as a dialogue between artists over the course of decades, rather than as a chronological lineup of works. It examines the various desires associated with and the abysses hiding behind the cultural-historical subject of the Alps and the 'alpine'. It juxtaposes art-historical icons of 19th century Romanticism and early 20th century paintings with contemporary art from Austria and the United States. 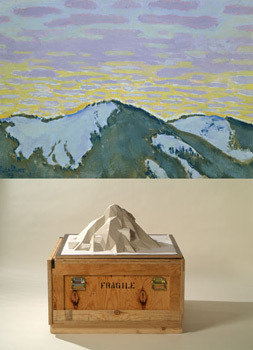 The Austrian Cultural Forum New York and the Belvedere Vienna present the new exhibition Alpine Desire. Featuring works by 21 artists spanning the 19th – 21st centuries, the exhibition has been conceived of as a dialogue between artists over the course of decades, rather than as a chronological lineup of works. Alpine Desire will be on view from January 27 – May 8, 2011 at the Austrian Cultural Forum New York.

The exhibition examines the various desires associated with and the abysses hiding behind the cultural-historical subject of the Alps and the "alpine". It juxtaposes art-historical icons of 19th century Romanticism and early 20th century paintings with contemporary art from Austria and the United States. The mountains are traditionally considered places with mythical powers superior to humanity. Historically, representation has focused on their sublime and pristine nature. However, beginning with industrialization in the 19th century, artists also depicted the uses and abuses man inflicted on nature.

While early 20th century artists still celebrate and represent the majesty of mountains—albeit with an expressionist and transformational visual language—contemporary artists expanded their interests to social and political issues. Still inspired by nature itself, they also look at the manifold, sometimes problematic realities behind the visual. Many question both the historical but also the contemporary mechanisms of representation. Sometimes beauty and horror can exist side by side, and the sublime can conceal nightmares.

Combining the majestic and the eerie and consisting of 100 life-size, solid cast iron figures of the human body, Antony Gormley's Horizon Field is spread over an area of 58 square miles in the High Alps. The first project of its kind, it is the largest landscape intervention in Austria to date. Similarly playing with the uncanny on an epic scale, the collective Gelitin use their bodies to shock the audience to riff on sexual and identity politics. By inserting themselves, naked and with erections, within a sublime mountain setting, the artists contrast the charm of the hypnotic vistas with taboo concepts to unsettle audiences.

The sheer majesty of the mountains becomes tangible in the work of artists like Thomas Ender and Michaela Schwentner. An immense reverence for nature in 19th century Romanticism, included a critical look at human interference in nature – a sentiment still well-represented in contemporary art. Alpine Desire shows several artists' stances toward the ambivalent effects people have had on the mountains (e.g., Ferdinand Georg Waldmüller, Gregor Sailer, Margherita Spiluttini).

With media ranging from photography to video to painting, other artists also use the human body in juxtaposition with the mountain vistas for various forms of commentary. Walter Niedermayer's large-format photographs illustrate the paradox of human significance and insignificance in the face of nature, while others, like Richard Jochum, insert stylistic cues that bring to mind ancient myths. Christian Philipp Müller plays with the familiarity of the Alps by having a group of men covered in a huge loden cape march through misty mountain landscapes.

Frequently rendering the journey and the climb part of their artwork, some of the artists play with the concepts of familiarity and alienation by taking models of the Alps to different parts of the world (Hans Schabus), by inserting images of the alpine region into models of their studio (Lois Renner). Looking at different concepts of abstraction, Alpine Desire makes visible the various relations of aesthetics with human convention (Koloman Moser, Herbert Boeckl, Ellen Harvey, Ed Ruscha, Herbert Brandl, James Everett Stuart). Some artists do not even limit themselves to the European Alps, but instead branch out to remote places such as Tibet (Michael Höpfner) or Idaho's Sawtooth Valley, where Laura McPhee traveled and took cues from 19th century American landscape painting to emphasize the negative impact humans have had on this region.

Alpine Desire will also include a newly commissioned site-specific mural by Adam Cvijanovic. Painted on Tyvek and applied to the surface as one would wallpaper, the artist breaks through the architecture of the Austrian Cultural Forum and transports viewers from this urban midtown space to an ethereal alpine landscape.

The opening reception will take place on Wednesday, January 26, from 6 to 8pm, at the ACFNY, 11 East 52nd Street, New York, NY 10022. Admission is free.
The opening will be preceded by an artist talk from 5pm to 6pm (reservations required)