The Hottest Day of the Year. The exhibition features a personal selection of her overall artistic production over the last 5 years: films, texts, drawings and installations. Cytter is known to produce a new work for every show she is invited for, to respond and adapt to ever-changing situations, cultural topics and aesthetic strategies. One specific topic of her research has remained constant: the alienation between experience and communication, narrative and representation. 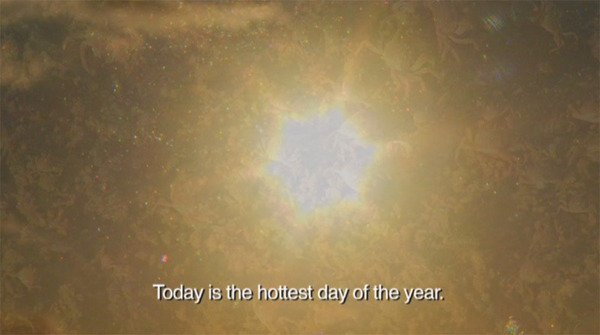 From January 29 through March 27 2011, Kunstverein München opens its 2011 program with a comprehensive solo-exhibition of Berlin based visual artist Keren Cytter (*Tel Aviv, 1977). The exhibition, entitled “The Hottest Day of the Year“, features a personal selection of her overall artistic production over the last five years: films, texts, drawings and installations. The exhibition gives an intriguing insight in the dynamic development of Cytter's artistic career, with ambitious contributions to the Venice Biennial (2009), MUMOK Vienna (2007), Biennial of Lyon (2007) and CUBITT gallery in London.

Keren Cytter is known to produce a new work for every exhibition she is invited for, allowing her individual works to respond and adapt to ever-changing situations, cultural topics and aesthetic strategies. Hence, Cytter has constructed an unpredictable genre of visual production that touched upon diverse media and forms of expression: also including theatre and writing novels and even children’s books. This is probably the reason why, after her first introduction at the Frankfurter Kunstverein in 2005, a comprehensive overview- exhibition in Germany did not materialize.
For the exhibition “The Hottest Day of the Year“ in Munich, Cytter is asked to look back and construct a context of her own oeuvre instead of giving in to the ever growing demand for her active production. Over the last five years her scripts have developed from low-key settings (mostly filmed with her friends within her apartment) to more ambitious and complex scenarios and plots. However, one specific topic of research has remained constant: the alienation between experience and communication, narrative and representation – a topic that has continued to inspire the artist and her internationally growing audience.

The works of Keren Cytter seem to be coined by the recent emancipation of popular modes of social distribution (such as Youtube, Myspace, Facebook, Twitter etc.) when they feature a human condition in which sending information seems prioritized above receiving it. Despite the fact that the human condition portrayed by Cytter's work seems absurd and fragmentized at first, it doesn’t seem so far from reality when seen in the perspective of the inter-human “communication” of today. Without knowing who is actually listening on the other end, social media have regressed inter-human communication towards an endless distribution of human-interest in which each sender plays idealized roles based on block-buster movies, television, social-interest documentaries, soaps or pornography. The protagonists in the works of Cytter face exactly this problem when a scripted reality of archetypes has taken over their mental state and memory. In a casual manner one sees cinematic roles (from Nouvelle Vague to Tarantino) being played within the privacy of a domestic setting, causing an advancing alienation between emotion and expression. Within this artistic strategy of alienation no genre is left untouched by Cytter, who playfully dissolves any sense of cultural hierarchy between high- and low-brow levels in order to benefit the dramatic fluidity of her scripts.

The title of the exhibition is taken from one of Cytter’s latest films, “The Hottest Day of the Year“ (2010), which concludes her selection for her Munich exhibition. It is inspired by earlier anthropological depictions of colonial settings such as Chris Marker’s monumental film “Sans Soleil” (1983) and the works by Vietnamese theoretician and filmmaker Trinh T. Minh-ha (*1952). The earliest work of the exhibition is the “Date Series” (2004): a seven-channel video-monitor installation that Cytter produced in the summer of 2004. The first part of this series was shown at her first exhibition in Germany, at the Frankfurter Kunstverein. The version displayed at the Kunstverein München continues where this exhibition left off and shows this impressive installation for the first time complete.