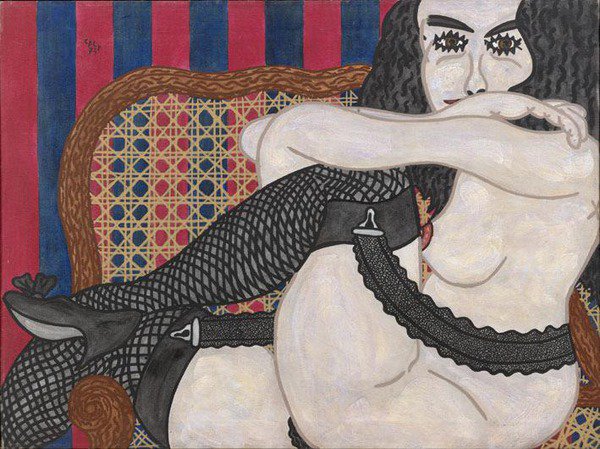 From January 30 to May 8, 2011 the me Collectors Room will be showing X-RATED, the eponymous exhibition from 1974 by William N. Copley, and recent works by Andreas Slominski.

Copley’s (1919 – 1996) paintings are being presented in Europe for the first time in 30 years. As the title implies, X-RATED deals with “adult” content.

When over 30 of his works were put on exhibit in 1974 at the New York Cultural Center, the response ended up being rather restrained. Yet from today’s viewpoint, Copley was one of the most independently-minded personalities of the art scene at the time. Starting in the mid-1940s he emerged an important mediator – as gallerist, artist, author, and publisher – between the Surrealists and the Pop Art movement. After having exhibited important representatives of Surrealism like Man Ray, Roberto Matta, or Max Ernst in Beverly Hills in his brief role as a 27-year-old gallerist, he moved to Paris in 1951 with Man Ray in order to pursue his career as a painter. Inspired by the Surrealists and by Matisse, Copley developed his own distinctive style. Throughout his creative period he was an „artist for artists“ and was admired by groundbreaking personalities of the 20th century, including Duchamp, Warhol, and Magritte. His friend Man Ray described him as follows:

“He is absolutely sincere in his pursuit of joy and of liberty, in his love of life and his refusal of cliché. He is the wisest of us all, carefully hiding his sophistication under the guise of a simple man” (Man Ray).

Andreas Slominski is a conceptual artist. Simple, common actions are deconstructed in a ‘circuitous’ method and subsequently presented in a new light. The many fruits of this method could be seen at his shows at the Fondazione Prada in Milan in 2006 and the MMK in Frankfurt in 2006/2007. With his new series “xyz. erotic vol.”, Andreas Slominski, the expert trap-setter, subverts all expectations again.
The ‘trap’, for Andreas Slominski, is the perfect form in which to strip an action’s complexity down to its essentials; however the strategy that charts the way towards this goal itself also leads to a sometimes confusing profusion of possible divergent courses of action.

“Slominski’s objects, and especially his pictures made of polystyrene, demonstrate a proud, almost bold disregard for questions of taste” (Massimiliano Gioni).

Common to the work of Copley and Slominski, aside from the topic and an emphasis on lines and ornamentation, is a particular humor as well as the sense of irony evident in the directness and clarity of both artists’ works.

Presented in parallel to the exhibition X-RATED, in the café and lounge area, are works by the two artists from the Olbricht Collection.

The exhibition is framed by guided tours, discussions on the topic „X-RATED“, film screenings, collector’s talks and concerts. The children’s program of the me Collectors Room will be taking place in the Wunderkammer (chamber of wonders).