An exhibition of sculpture and photography. Rodin's sculptures are shown in the show in unexpected and unprecedented combination with a series of photographs by Hiroshi Sugimoto, one of the world's most admired living photographers. Sugimoto works with time as his clay, exploring the relation of images sculpted in light and shade to the evolution of history. 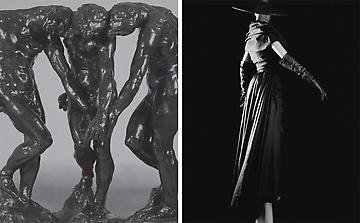 Gagosian Gallery Paris is pleased to announce “Rodin - Sugimoto,” an exhibition of sculpture and photography.

Auguste Rodin brought monumental public sculpture forward into the modern era. Although educated in the academic traditions and idealized subjects of classical and Renaissance sculpture, he embraced truth to nature as his artistic credo. His uncanny ability to imbue inert substances with movement and feeling reveals the idiosyncrasies and psychological depths of the human subjects that he portrayed. His agile use of form and the bravura of his modeling in pursuit of turbulent, light-catching surfaces have established him as one of the progenitors of modern sculpture.

Three monumental sculptures spanning the last thirty years of Rodin’s career represent the force and vigor of his approach, which emphasized the quality of flesh while suggesting emotion through detailed, textured surfaces and the interplay of light and shadow upon them. The Three Shades (c. 1880), from the private collection of Iris Cantor, is an introspective group study in which the standing figure of Adam from The Gates of Hell is repeated in shifting perspective; Monument to Victor Hugo (1897), on loan from the renowned Iris and B. Gerald Cantor Foundation, is a stirring meditation on artist and muse, a roiling figure composition that depicts the great artist deep in thought; The Whistler Muse (1908), on loan from the Musée Rodin, was intended to honour a commission in tribute to the American painter James Abbott McNeill Whistler who had requested not to be physically represented - in response Rodin chose the symbolic image of the muse. Rendered like a classical fragment, the armless female figure attempts to climb a mountain in an allegory of the challenge of artistic creation.

Rodin’s sculptures are shown here in unexpected and unprecedented combination with a series of photographs by Hiroshi Sugimoto, one of the world’s most admired living photographers. Sugimoto works with time as his clay, exploring the relation of images sculpted in light and shade to the evolution of history. For the series Stylized Sculpture (2007), he selected distinctive garments by celebrated couturiers from the collection of the Kyoto Costume Institute -- from Vionnet’s precociously modern T-dress and Balenciaga’s wasp-waisted billowing ensemble to Yves St Laurent’s strict geometric Mondrian shift and Issey Miyake’s sail-like slip. Each in its own way represents a pivotal moment in twentieth century fashion history, its corporeal dynamics crystallized by the steady gaze of the camera lens.

Shot in chiaroscuro on headless mannequins, and thus removed from the context of the human body and its emotive associations and specificities, the garments reveal their pure formal qualities in terms of dramatic contrasts in form, volume, and surface. Sugimoto captures the abstract, sculptural nature intrinsic to the history of clothing – a history as ancient as humanity itself – and in so doing, depicts the eternity beyond the evanescence.

The exhibition will be accompanied by catalogue with an essay by American scholar and curator Kenneth Wayne.

Auguste Rodin was born in Paris in 1840. In 1854, Rodin enrolled at the École Impériale de Dessin (the "Petite École"), a government school for craft and design. Although he was awarded two prizes for drawing and modeling at the age of seventeen, Rodin was unable to gain admittance to the prestigious and conservative École des Beaux-Arts, which rejected him three times. He began to use live models in 1863. In 1870, Rodin travelled to Brussels, where he remained for six years. In 1877, he exhibited The Defeated (now titled The Age of Airain) at the Cercle Artistique et Littéraire in Brussels, then the Salon des Artistes Français in Paris. He was accused of having cast his statue directly from life. In 1880, Rodin was commissioned by the French Ministry of Fine Arts to design The Gates of Hell, his first large-scale public project. He exhibited many of these figures independently. By 1900 Rodin had achieved the pinnacle of success and he was able to complete long term projects including Monument to Victor Hugo. In 1893 Rodin moved to Meudon outside of Paris, where he remained until his death in 1917. Recent exhibitions include “Leaving Rodin Behind? Sculpture in Paris, 1905-1914”, Musée d'Orsay, Paris (2009) and “Matisse & Rodin”, a permanent display at the Musée Rodin, Paris (2009).

Hiroshi Sugimoto was born in Tokyo in 1948. In 1970 he moved to Los Angeles and studied photography at the Art Center College of Design. He has exhibited extensively in major museums and galleries throughout the world, including the Metropolitan Museum of Art, New York (1995); Deutsche Guggenheim, Berlin (2000); the Kunsthaus Bregenz, Austria (2002); the Serpentine Gallery, London (2003) and the Fondation Cartier de l'art contemporain, Paris (2004). A major survey of his work opened at the Mori Art Museum, Tokyo in 2005 and travelled to the Hirshhorn Museum and Sculpture Garden, Washington, D.C. and the Fort Worth Art Museum, Texas (2006). In 2007, a European retrospective began at K20 Kunstsammlung Nordrhein-Westfalen, Düsseldorf (2007) and traveled to the Museum der Moderne, Salzburg, Neue Nationalgalerie, Berlin and Kunstmuseum Luzern, Switzerland. (2008).

Sugimoto lives and works in New York City and Tokyo.